What Can You Do With An Econ Major? 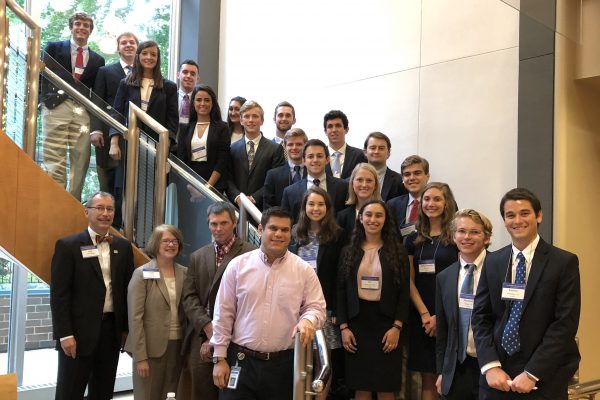 Over Reading Days, 19 students and five faculty and staff members traveled to Washington, DC to explore the theme: “What can you do with an econ major?”.  According to Linda Hooks, Professor of Economics, who accompanied students on the trip: “One takeaway for students was that economics is a really versatile degree.  We saw economics being applied in policy settings, in companies like Uber, and in consulting.  What matters about the economics degree is that it gives students a framework for thinking about problems.  That framework applies in many real-world settings.” Zainab Abiza ’19 enjoyed her experience: “Going on the D.C. economics trip helped me gain a better understanding of what economic consulting is and gave me insight into each of the firms visited.”

We departed Lexington via bus on Wednesday night, and on Thursday morning, we hit the ground running.  We visited Economists, Incorporated which is an economic consulting firm.  Phillip Harmon ’17 is a current Research Analyst at the firm, and he loves his role because he is continually learning on the job.  Next up was Berkeley Research Group, another consulting firm.  We were hosted by Cody Bills ’15, Austin Hay ’16, Hollis Tardy ’17, Philip Aiken ’17, and Parker Pitts ’17.  It was energizing to see so many alumni working at one firm.  Our third stop of the day was The Brookings Institution, where we had a lively discussion of tax policy and lunch.  The final visit was with Christy Felling ’93 at No Kid Hungry/ Share Our Strength.  Christy gave valuable insight in how to tap into the W&L alumni networking, and encouraged students to reach out to ask for specific ways in which they need help in pursuing their dream careers.  We also learned a lot about how to combat childhood hunger in America through programs such as “breakfast after the bell”.

Students had a free evening on Thursday to explore the city.  Some took advantage of cultural sights or restaurants and shopping, while others had the opportunity to visit with young alumni and friends from home.  On Friday, we began the day at The Heritage Foundation, a conservative think tank.  Parker Sheppard ’08 co-hosted us, and he encouraged students thinking about a similar career path to take a lot of math.

Next, it was on to The Federal Reserve which was a highlight of the trip, according to Hooks and Abiza. John Schindler ’94 and Ellen Wiencek ’15 were our hosts.  Other alumni present included Alex Fernandez ’13, Matt Carl ’17, Meera Kumar ’16, Jacob Strauss ’16, and Alice Moore ’16. We were joined by Federal Reserve Board Governor Jay Powell, who spent an hour with our group discussing everything from his suggested reading list to the value of his law degree.  His message to students was that a career path is rarely linear, and he encouraged them to be committed to continual growth and to learning new things.  Initiative is critical to growth, because a little bit of initiative can change your life completely.

Abiza said, “Our visit to the Federal Reserve was a great opportunity to learn about some the work our alums are doing and how they ended up there. Meeting Governor Powell was definitely the highlight of this trip!” Professor Joseph Guse reported that he “was amazed that (Governor Powell) spoke to us for so long and with such candor. Moreover, I was extremely impressed with his knowledge on a range of issues.  He touched on monetary policy, credit and bankruptcy law, labor economics, economic history and environmental policy and it was clear that he has read extensively in these areas.  I think the take-home message for the students is that learning doesn’t stop when you graduate. Governor Powell’s only advanced degree is in law.  His success as a respected expert on economic policy derives at least in part from his willingness to constantly read and learn in new fields.”

We then visited Andrew Olmem ’96 ’01L at the Eisenhower Executive Office Building, adjacent to the White House.  Andrew is the Special Assistant to the President for Financial Policy and serves on the National Economic Council. Andrew spoke with students about making a financial sacrifice to go with his conscience, and leaving a major law firm to take a job that provides a real impact in public service. Hooks said, “The highlight of the trip for me was the visit with Governor Jerome Powell at the Federal Reserve, followed immediately by the visit with Andrew Olmem ’96 ’01L, Special Assistant to the President for Financial Policy.  The combination allowed us first to hear about monetary policy from the pure economics side and then to hear about the political side.  The complexity of that economics and politics interaction is an insight students could not get in the classroom.”

The final stop of the trip was Uber, where Holley Beasley ’15 was our host.  Holley is working on UberWAV, a relatively new platform that connects handicapped riders with accessible vehicles.  She enjoys her job because she is always thinking about new ways to solve problems, and described the environment at the company as, “a constant cycle of learning as we go.”

Tanner Williams ’19 summed up the benefits of the trip: “The economics trip to Washington DC was an awesome opportunity for me to make connections through the W&L alumni who spoke with us as well as other alumni living in the city who I was able to reach out to. Everyone I spoke with was more than willing to help in any way they could and I learned a lot about opportunities I otherwise would not have known about.”