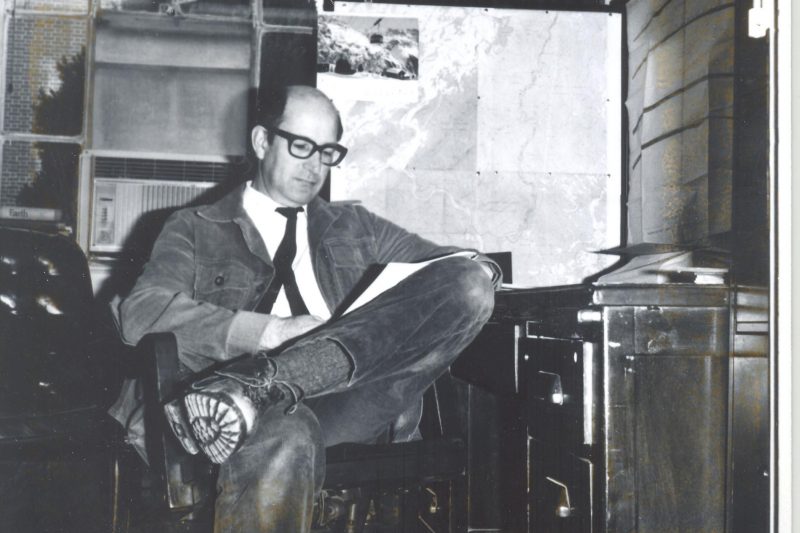 A native of Monticello, Arkansas, Spencer graduated from W&L in 1953 with a B.S. in physics. He then attended Columbia University, earning his Ph.D. in 1957 in structural geology. That fall he returned to W&L for an intended two-year stint in the Geology Department and ended up making Lexington and W&L his permanent home. He spent his life unraveling the mysteries of the Earth’s interior and the structure of mountain systems, most especially his beloved Appalachians. Spencer taught at W&L for over 40 years, chairing the Geology Department for many of them. He retired in 2001.

“Professor Spencer represented the very best of Washington and Lee University and will be remembered as a gifted teacher, scholar and generous mentor,” said President Will Dudley. “Over the course of his career, he worked tirelessly to strengthen the Geology Department, building a truly outstanding program. We are grateful for Professor Spencer’s service, and I know his many friends and colleagues join us in expressing our sympathies to his family.”

Spencer taught courses on oceanography, meteorology, structural geology and geophysics, as well as seminars on Greek natural philosophy and the geology of the Pyrenees. His research, in the Beartooth Mountains of Montana and in the Appalachians, was supported by grants from the National Science Foundation, the American Geological Institute, the American Chemical Society and the Mellon Foundation. In 1990, he received the Outstanding Faculty Award from the Virginia Council of Higher Education.

The highlight of every academic year for him was his Spring Term geology field course. Spencer regularly traveled around the country with students and other faculty to explore regional geology in locations that included the West Coast from California to Washington, New England, the Great Smoky Mountains in Tennessee and the Southwest. In 2018, Quinn T. Kiley ’95 created the Edgar W. Spencer ’53 Geology Field Research Fund to provide support for student field research under the supervision of W&L geology professors. In 2001, the Samuel Kozak, Edgar Spencer, Odell McGuire and Frederick Schwab Endowed Geology Fund was established to honor Spencer and his colleagues and to provide support for geology students to present their research at professional meetings and conferences.

Spencer also focused on research, conducting fieldwork and leading countless field trips in the Blue Ridge Mountains and other parts of the world. He published geologic quadrangle maps of the Appalachian region and a map interpretation book and was the author of several textbooks on structural and introductory geology. He was the recipient of the Virginia Geological Field Conference’s 2013 Anna Jonah Award for Outstanding Contribution to Virginia Geology. His most recent book, “Guide to the Geology and Natural History of the Blue Ridge Mountains” (2017), was named an Outstanding Title for 2018 by the American Library Association and was also named Best Guidebook of 2019 by the Geoscience Information Society.

David Harbor, professor of geology, noted, “For more than 60 years, Ed has been part of the Geology Department at Washington and Lee, first as a student, then as leader of a department that grew from one to four faculty members and took up the first environmental studies curriculum on campus. Ed taught generations of students with great skill, energy, care and enthusiasm.” 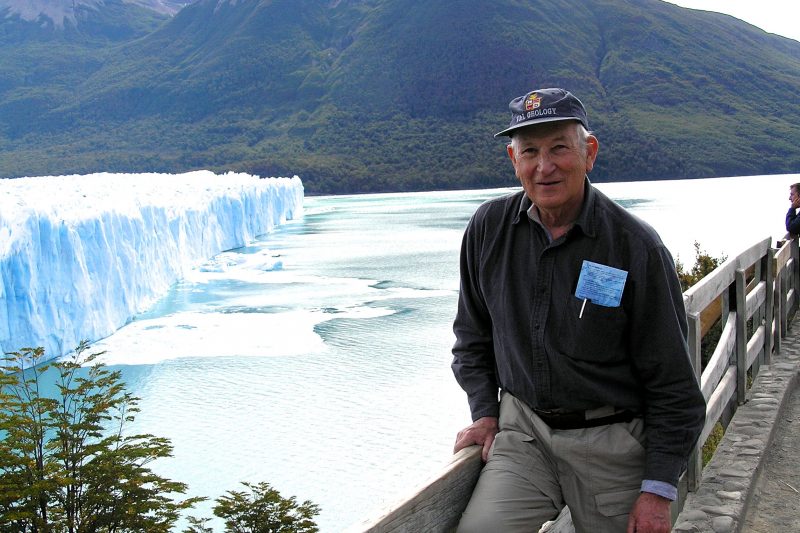 Ed Spencer ’53 on one of the many Alumni Traveller Programs he hosted.

Spencer cherished his relationships with students and alumni, often hosting events with his wife, Betty, at their home and entertaining visiting alumni who wanted to catch up. Spencer was a well-known fixture within the W&L Alumni Traveller and College programs between 1989 and 2013, teaching seminars on campus and leading trips to the Grand Canyon, Switzerland, New Zealand, Patagonia, Nepal and the Arctic, among others. While on an Alumni College trip to New Zealand he earned the affectionate nickname “Doc Rock.” Fred Schwab, professor of geology emeritus, said, “Ed treasured the friendships he established with students, which lasted long after they graduated. He had a gift for opening up his heart and his home on Poorhouse Mountain to everyone, and I am so fortunate to have been in the position of having had a wonderful working and personal relationship with him.”

Spencer served on many committees at W&L and was instrumental in revising the university-wide course requirements, in developing the 12-12-6 calendar, in the decision to admit women to the university and in the design process for the Science Center. In 2013, Spencer received W&L’s Distinguished Alumnus Award for “a lifetime of achievements in academic, teaching and community contributions, and his support and impact on Washington and Lee.”

Chris Connors, William E. Pritchard III ’80 Professor of Geology, said, “When I first came to W&L, I would describe myself as Ed’s replacement, but I quickly learned there was no replacing Ed. His love of geology and desire to pass on geologic understanding to others has been an inspiration to me. I have always admired his ability to get along with others, act with humility and simply lead a good life. He had a grace that I have seen in few other people, and he will be dearly missed.”

Spencer was active in the community as well. He was a founding member of the Rockbridge Area Conservation Council (RACC) in 1976, and in that role sought to preserve Rockbridge County through research, publications and outreach. “Ed had the extraordinary vision to found RACC 44 years ago,” said Barbara Walsh, executive director of RACC. “He led by example with civility and integrity. He took a science-based approach to conserving the exceptional beauty and natural resources of the Rockbridge area.” He was a founding member of That Club and a longtime member of the Fortnightly Club. His pastimes included barbershop singing and gardening.

He was also a charter member of the Virginia Chapter of the American Institute of Professional Geologists and served as a consultant to a number of local governments on environmental issues, including water supply and nuclear waste disposal. In 1998, he was inducted into Omicron Delta Kappa.