Egged On Robyn O’Brien ’93 is a leading voice in food-industry reform, the author of “The Unhealthy Truth” (2009), and a frequent commenter on food allergies, politics and financials. 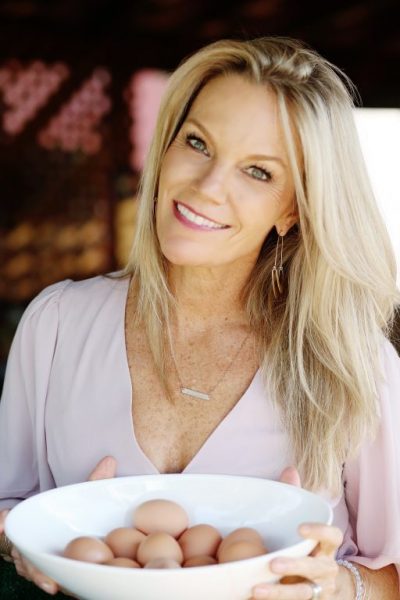 The focus of Robyn O’Brien’s work shifted the moment her daughter suffered a severe allergic reaction to eggs.

A financial analyst who covered the food industry, O’Brien ’93 started leveraging her background in finance to delve into the national food supply, leading her to expose double standards and a lack of transparency within the industry.

She credits W&L for her ability to collaborate and communicate with others on building a better food system. “My professors encouraged imagination, creativity and critical thinking,” she said.
Now the very companies that tried to instill fear in her a few years ago are coming back to admit, “‘You were right.’ That has been both the challenge and the reward.”

After W&L, O’Brien, landed a full scholarship to Rice University’s Jones School of Business and graduated in 1998 with an M.B.A. as the top woman in her class. She became an analyst on an invest-ment team in Houston that managed $20 billion in assets, and her work exposed her to a variety
of industries before she focused on consumer-facing products.

After her daughter’s allergic reaction, she created the AllergyKids website and newsletter outlining her findings about the food industry and what was happening to the health of children. The press picked it up, and in 2008 Random House bought the rights to her story.

“The Unhealthy Truth: How Our Food Is Making Us Sick and What We Can Do About It” was published on Mother’s Day in 2009. “Consumers embraced it,” she said. It’s been a best seller on Amazon for 10 years.

Since then she has appeared on a variety of television shows, including CNN, “Good Morning America” and CBS’ “Early Show” and “Evening News.” She’s also a regular on Fox Business. Her TEDx talks are viewed by millions of people and have been translated into about 20 different languages. Forbes Woman named her as one of “20 Inspiring Women to Follow on Twitter” and The Discovery Channel named her one of its 15 Top Visionaries.

Over the years she has presented to multinational corporations such as Nestle, General Mills and Target. She also helps advise investment groups, farming associations and startups in the food industry. “Thankfully, the work I have done has helped companies like these who have embraced this mission and are bringing in clean and safe food. This is what consumers want and they want it at an affordable price,” she said.

INFLUENTIAL PROFESSOR
Larry Boetsch ’69, professor of Romance languages, emeritus. “What I was pursuing educationally didn’t fit in a box, and he allowed me that creative diversity. He also encouraged me to apply for a Fulbright Scholarship to Paris, which I got.”

THE SMILING MILER
She collected the moniker from her high school track coach for the joy she gook in racing. Running has been part of the most important moments in her life — she ran on the day she graduated from college, the day she got married and the day of her first interview with CNN. And she still runs.