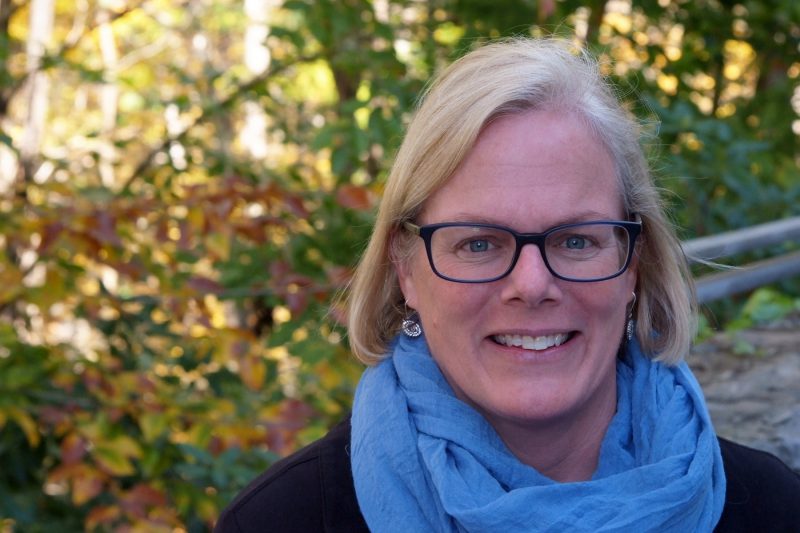 “I see advising as a key part of what we do at W&L, and part of why I love the liberal arts is that you do get to know your students in so many different environments.”

Listen to Ellen Mayock’s in-depth interview about her book with New Books Network. You can also read an interview with Inside Higher Ed.

Q: Sexual harassment is, unfortunately, in the news all to often these days. Your book, “Gender Shrapnel in the Academic Workplace” (Palgrave Macmillan), focuses on sexual harassment in the academic workplace. What is gender shrapnel?

A: Gender shrapnel is a series of small workplace explosions that occur when no one person or organization is purposefully discriminating against women (or men, less frequently) based on sex, but when the gender norms of our homes and of our public interactions that consistently follow a patriarchal flow are replicated in the workplace, entrenched in the workplace, and then become the fabric of a pattern of sexual discrimination. This pattern is normally not consonant with the organization’s professed values and is often in direct opposition to Title VII and Title IX law. Gender shrapnel also encompasses the scattered bits of metal at the intersections of gender with race, socioeconomic status, sexuality, parental status, national origin and religion.

If sexual discrimination, harassment and retaliation are an issue for educational institutions, then it’s more than likely that these institutions are not managing well the more acute problems of sexual assault and violence. We know that this goes against [federal antidiscrimination laws] and creates significant obstacles for girls and women in educational settings.

The U.S. government over the past several years has required educational institutions to inspect and revise their policies and practices. This increased vigilance sends the right message that illegal behaviors won’t be tolerated, although enforcement methods and goodwill about transparency still vary widely from institution to institution.

Q: As well as sharing the stories of those who have encountered sexual discrimination, your book delves into the legal theory and history, sociology, organizational management and media analysis of the problem. The final section of your book offers some solutions — you’ve referred to it as a toolkit. How do we overcome and break the cycle of sexual discrimination?

A: I believe in a multi-pronged approach, which includes providing education about gender and intersectional dynamics and pitfalls to every member of the organization, following up on that education in small and large groups, sending consistent institutional messages, considering and rectifying inequities in levels of visibility and invisibility, advertising new opportunities to all, and figuring out individual students’ and employees’ strengths that can contribute to organizational change.

Q: You’ve been the faculty advisor to the English as a Second Language (ESOL) and the interpretation services programs here at W&L. Talk about those.

A: ESOL began when two Spanish majors approached me way back in 2000-2001. They said, “Gosh, we’re hearing more Spanish in our community. Do you think there might be some language needs? Should we figure out if we should address those?”

Over the years, really great teams of student leaders have come forward to teach English in the community and through the county and city school systems. The in-school outreach has 25 active volunteers. We also have a family-outreach program, where we send students to teach the entire family. We’ve also taught English to students of many other languages, primarily Chinese, but Spanish represents the largest sector.

ESOL does do a lot of translation — paper translations, usually English-Spanish and English-Chinese — for many local organizations, schools and agencies. For example, students have translated the entire manual of the Rockbridge Area Hospice into Spanish, as well as the Rockbridge County Public Schools’ Program of studies for the high school and the inmate manual for the Rockbridge Regional Jail.

For the interpretation services, we try to make as many of the language matches as are requested.  Most often we are helping people with Spanish/English, and volunteers provide live assistance at W&L’s legal clinics, doctors’ appointments, parent-teacher conferences, etc.

Q: You mentor a lot of students. What is your approach?

A: I see advising as a key part of what we do at W&L, and part of why I love the liberal arts is that you do get to know your students in so many different environments. For me, the classroom is so core, so important, and such a strong base for the rest of the relationship. But also we have the privilege of getting to know our students outside the classroom, either by taking them abroad or working on extracurricular activities. As we get to know them and recognize what their passions and talents are, we can push them to expand their boundaries. 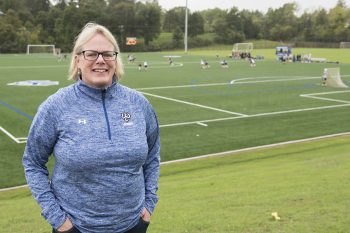 Ellen Mayock is the faculty mentor for the women’s lacrosse team.

Q: I know you’re a big supporter of W&L athletics and are often seen cheering on the Blue & White. You are the faculty mentor to the women’s lacrosse team, but how else are you involved with athletics on campus?

A: I’ve been W&L’s faculty athletics representative for the ODAC and the NCAA since 2007. I’ve also chaired the University Athletic Committee and been involved with the hiring of coaches. I advise a lot of students on NCAA post-graduate scholarships, and it is such a luxury to get to know those superstar scholar-athletes.

One of my favorite projects I worked on was creating the faculty-athlete mentor program, where we paired up a professor with a varsity team. I never thought we’d find 24 faculty to mentor 24 teams, but it worked out. I think this partnership fosters better integration from academics to athletics and back again. I also think it’s good for our students to know that we care about seeing them in different settings.

Q: What other projects are you working on?

A: I continue to work on scholarly topics, but I also endeavor to be creative writer. I’ve published poems, have worked on one-act plays and have written some memoir pieces.

I’m co-authoring a textbook on an advanced Spanish textbook with a cultural studies approach, and I’ve also just launched a Gender Shrapnel blog, where I discuss some of the real-world issues we see swirling around us.

And finally, I’m interested in the connection between silence and violence, which is related to my gender and studies background, and how it maps itself in the whole body — the heart, the head, the stomach.