“RAOC offers not only an employment opportunity, but also a huge social, emotional and psychological role in the lives of not only these individuals but also their families.” 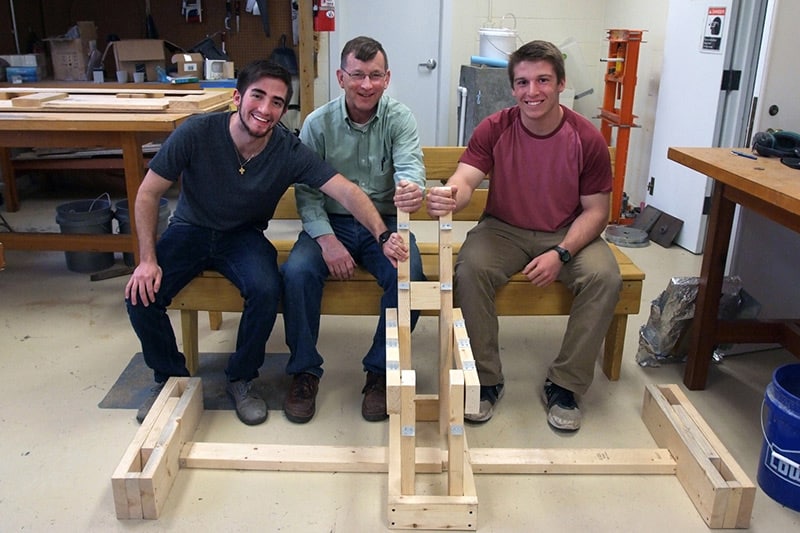 Most people are delighted to have a vacation day, but the employees at Rockbridge Area Occupational Center can think of nothing better than reporting for duty.

“This is the only place I’ve ever been where someone has wanted to come to work,” said RAOC Executive Director Roy Funkhouser. “If they have a day off, they are fussing about not being able to be here.”

The employees of RAOC are all adults with some kind of disability that precludes them from holding a traditional job. The occupational center was founded about 1970 by parents who wanted something for their adult children to do.

“I think the biggest thing they get out of it is the pride of being able to say they have a job,” the director said. “All sorts of things we take for granted in our daily lives, these folks may not have that type of exposure.”

Now, engineering students at Washington and Lee have made the RAOC jobs even more rewarding by creating a device to help them in their furniture workshop. Angel Vela de la Garza Evia ’18 and Walker Brand ’18, along with other students in Professor Kacie D’Alessandro’s winter 2015 Computer Aided Drafting and Design class, designed and built an apparatus that allows RAOC employees to make garden benches without having to measure the dimensions of the bench. These long wooden benches are one product in a line of outdoor furniture that is made-to-order and sold by RAOC.

At RAOC, a nonprofit that operates as a business, employees do a variety of jobs such as shredding documents, general lawn care, stuffing envelopes, sorting and assembling. They must be able to do the work by hand or with simple hand tools, Funkhouser said, because they don’t have the capability to use automated tools or power tools.

This type of work used to keep RAOC plenty busy, but as some of its clients have gone out of business and technology has been automated, the amount of work has slowly dropped. As a result, RAOC is struggling to stay relevant and has tried to diversify, adding outdoor furniture to the offerings. Other items made at the center include picnic tables, Adirondack chairs and cornhole boards.

Funkhouser said the center used to have an employee who was fairly skilled at woodworking, but he got a job in a local factory — a blessing for him, but a big loss for RAOC.

“The guy we have now doesn’t do math, he can’t do fractions, so it’s very difficult for him,” Funkhouser said. “He can put the pieces together, and if I go out there and make the measurements for him, he can cut the pieces and put them together, but he is not at a point where I can just say, ‘OK, go out there and build a bench.'”

Enter Alessandra Del Conte Dickovick with the Community-Academic Research Alliance (CARA), a community-based research initiative that is part of the university’s Shepherd Program. One day, she visited RAOC to talk to Funkhouser about how CARA could help them, and they came up with the idea to ask an engineering class for help.

“I didn’t even know that W&L had this program at all,” Funkhouser said. “Really, Alessandra led the charge on this one.”

When Dickovick visited the facility, it was clear to her how important the work is to the employees.

“RAOC offers not only an employment opportunity, but also a huge social, emotional and psychological role in the lives of not only these individuals but also their families,” she said.

Since the center already had jigs for making the Adirondack chairs and picnic tables, Funkhouser decided they could really use one for the garden benches. That way, all his workers would have to do is measure the wood using a template, saw the wood, place the pieces on the device and screw them together — and one person can do it alone.

D’Alessandro’s class toured the center, then Funkhouser loaned them a bench to use as a reference. D’Alessandro broke her class into teams and had each one design a device for RAOC. At the end of the year, they presented their designs, and Funkhouser pointed out what he liked about each one.

That was the end of the project for most students in the class, but Brand and Vela de la Garza Evia took it a step further. They wanted to combine the best parts of each design and create a final version so RAOC could use it. The hardest part was finding the time to do it — in addition to classwork, Brand plays football, and Vela de la Garza Evia is a resident advisor who serves in the Bonner Program.

Often, when they met at the Howe Annex to construct the piece, they figured their task that day would only take about 30 minutes. Two hours later, they would be still tinkering with it, but they enjoyed every minute.

“I think that one of the coolest parts of the project was all the trial and error,” Brand said.

The finished product allows RAOC workers to place the legs of the bench in holes that space them apart the correct distance and hold them upright. The slats for the seat and back of the bench are then placed on the device, which spaces them apart the accurate distance. Then, workers simply screw the pieces together and remove it from the jig.

On March 14, the students were ready to hand it off to RAOC. Funkhouser drove to campus, inspected the device, and loaded it into his pickup truck to take it back to the center.

“These two guys have taken it a little bit further, and I would hope they are getting some reward out of the fact that they are doing something that is going to help a group of people that might not otherwise get this kind of assistance,” Funkhouser said. “They’ll get to look at it and know that in some small part they are going to get to enhance someone’s life. And it helps the organization because we make these things to sell, and that supports our own overhead.”

The students said they did derive a great deal of satisfaction from the project, and it reinforced their decision to study engineering at W&L.

“I think [with] engineering you can really reach out to many areas of the community,” said Vela de la Garza Evia. “You can build stuff and know that the things you build are going to help a person or a whole community.”

To learn more about the Rockbridge Area Occupational Center, go to raoc.org.