Erika Hagberg ’97: Comfortable Being Uncomfortable Hagberg says the philosophy at Google, where she is head of food and beverage advertising, is to avoid complacency. 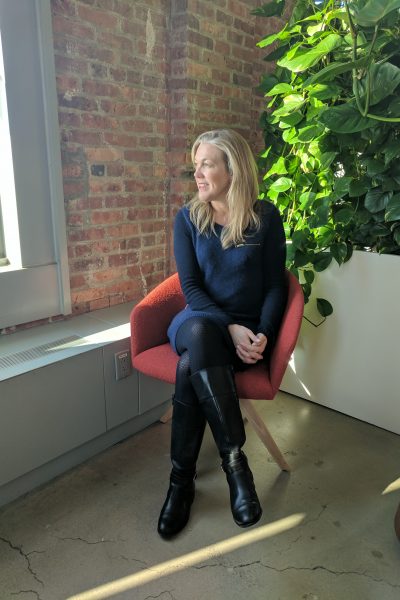 Erika Hagberg ’97 learned the importance of building relationships and bonding with people while she was a student at Washington and Lee.

Those values have served her well as she built her career. Now head of food and beverage advertising at Google, Hagberg and her team build tight-knit relationships with clients to deliver tailor-made advertising solutions to powerhouse brands, including Coca Cola and Mars.

Her approach is to think of the consumer first and to partner with her clients to develop a custom game plan to best reach that target consumer. “Advertising is much more transparent and interactive than it used to be, which allows brands to really dial in their messaging with contextually relevant ads.” There’s no one-size-fits-all advertising solution, and Hagberg enjoys consulting with and helping her customers take advantage of Google’s platform of search, video, maps, social, mobile and other online solutions.

A journalism major at W&L, Hagberg interned for Fox News for several summers before landing her first fulltime job at AOL in a sales and relationship management role. “That was during the early days of dial-up internet access, when you installed AOL on your computer using floppy discs,” she recalled. She worked for AOL from 1997-2001, and then, when AOL merged with Time-Warner, she moved to Time Inc., as a senior sales representative for Money magazine.

As a business and sales developer, she described herself as an ambassador for the company’s 65 magazine titles, as well as for AOL’s burgeoning online sales business. “It was a really exciting time because businesses were learning about online advertising for the first time. It was my job to break down silos and introduce integrated marketing plans, combining traditional print media with new online advertising opportunities,” she said.

For the past 11 years, Hagberg has worked at Google as a sales and relationship management leader. Before moving to the food and beverage category, she helped build Google’s financial services sector, where she was responsible for developing relationships with advertising partners in banking, credit cards, insurance and investments.

Hagberg is proud of the life-long relationships and personal friendships she has developed, both with her W&L network and with her customers and colleagues. Often called an eternal optimist by those who have worked for or with her, Hagberg said she is candid with her peers and consistent and even-keeled in her management approach. She leads her team from behind by removing obstacles in their paths. “I empower those around me to succeed,” she said, crediting the relentless work ethic her parents instilled in her and her sister at a young age.

Google’s mission, she said, is “giving everyone in the world the same access to knowledge.” She described Google as an “incredible” company and that is “open and inclusive.” The company has “a young, passionate culture, where the founder believes that you can spend your entire career and still pursue your passions in making the world a better place.”

The philosophy is not to be complacent. “Sometimes, you have to be comfortable being uncomfortable,” said Hagberg. “Google is not a hierarchical company. We don’t think of a career ladder or a glass ceiling — it’s more of a jungle gym,” she said. “Ideas come from anywhere in the company, and everyone is a contributor. I love that.”

In thinking of her time at W&L, Hagberg remembers Bob de Maria and Ham Smith in the journalism department, who “were tough but fair,” and helped her learn to think critically. She also remembers George Bent in art history and Jim Warren in English as friends and mentors.

As a lacrosse player, Hagberg looked up to coaches Jan Hathorn and Laurie Stagnitta

. “Both were incredible leaders” and instilled the importance of working as a team. “I remember watching Laurie, our assistant coach and mother of two young children at the time, and thinking how on earth does she do it?” Years later, Hagberg knows how to juggle being an accomplished working mom. With three boys of her own: William, 10, James, 8, and Layton, 4, Hagberg emulates her coach’s ability to balance work and family life.

“All my professors were incredible, and the learning environment at W&L was second to none,” said Hagberg. Small classes also attracted her to W&L, which she first visited when a friend’s daughter enrolled. “W&L continues to be the place where I go for advice.”

Hagberg recently returned to W&L to give the keynote speech at a summit sponsored by the Connolly Center for Entrepreneurship. She talked to students, alumni and faculty about “embracing the future and where we’re going.” Hagberg said she was impressed with the “incredible technology” in the center’s new space, where students are learning to break new ground as entrepreneurs.

She has given back to the school by being a resource for students, and she will be serving on the center’s advisory board. She also spoke on an alumni panel at a women’s leadership forum in Roanoke, where she emphasized the importance of helping girls gain confidence, whether in the classroom, at work or in social settings. “We should always be building our leadership presence, no matter how long we’ve been in a career.”

Originally from Medford, N.J., Hagberg now lives in Rumson, N.J., with her husband Peder Hagberg, ’97, and their sons, who get a healthy reminder of the W&L traditions of honesty, integrity, the speaking tradition and the importance of a solid liberal arts education.

Hagberg is proud of the wonderful connections she has made with her fellow Googlers and her clients over the years. “I get energy through people I work with,” she said. Building relationships and building trust allow her to flourish in partnerships with customers.

She loves what Google is doing to change the world. “One of our nine principles of innovation is to have a mission that matters, and to me, this is the most important principle of all. We believe that the work we do has impact on millions of people in the world. Every day, I’m more excited than yesterday about the positive impact we’re having on our world.”