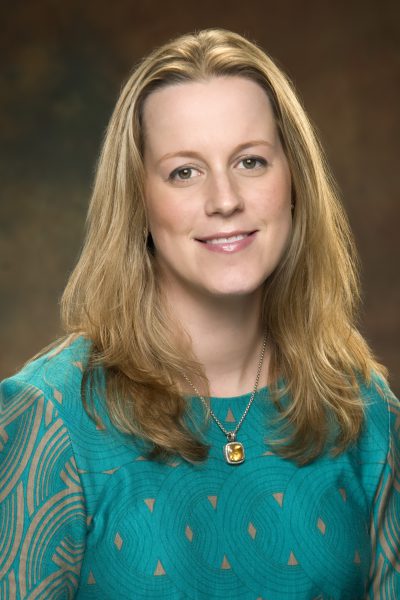 Many children like to play doctor or dream of becoming one someday. For Erika Proko Hamilton ’03, her determination only intensified during her middle school years, when her mother was diagnosed with breast cancer. And that childhood dream became a reality.

Now Hamilton, a former six-time All-American tennis player at W&L, is associate director, breast cancer research, at the Sarah Cannon Research Institute (SCRI) in Nashville. She spends half of her time in direct patient care and the other half in research, managing clinical trials.

“Patients enter a clinical trial for a variety of reasons–either because other treatments have failed or with early disease, because we are trying to improve upon a standard therapy,” she said.

Doctors at SCRI work with patients from all over the United States and the world, although most come from the region around Nashville.

Although Hamilton looked into other areas of oncology, including surgery and pediatric oncology, she decided to focus on adult oncology. She enjoys developing relationships with her patients, helping them “feel more in control of an otherwise overwhelming situation.”

She said her research involvement is the most rewarding aspect of her job. “It gives me the opportunity to not only take great care of the patients I am directly involved with, but also have the knowledge that we are hopefully improving the care of future patients. It’s a very motivating thought.”

Hamilton prepared well for medical school and her career. At W&L, she majored in neuroscience, which combines elements of biology, chemistry and psychology. She remembers professors Jack Wielgus in biology and Bob Stewart in neuroscience, as her biggest champions and mentors.

The professors, with whom she keeps in touch, were also supportive of her participation on the tennis team, which involved practicing two or three hours a day for up to six days a week, and matches in the fall and spring. “It was almost a year-round pursuit,” said Hamilton. Pre-med students typically do not have time or encouragement to pursue other time-consuming activities, but Hamilton not only played tennis, she excelled at it.

After being named All-American six times for tennis and winning many other awards and honors from ODAC, Hamilton received an NCAA postgraduate scholarship and was a finalist for NCAA Woman of the Year.

She earned an M.D. degree in 2007 from University of North Carolina, Chapel Hill, and did a fellowship in hematology and oncology at Duke University, where she was a top five finalist for Duke’s annual Housestaff Fellow Teaching Award.

In 2013, Hamilton was named to the W&L Athletic Hall of Fame, and that same year, the NCAA named her a Division III “40-in-40.” The honor recognizes former student-athletes who “exemplify the division’s attributes of proportion, comprehensive learning, passion, responsibility, sportsmanship and citizenship–not just during their time on campus, but also in their careers or avocations.” The recognition was part of the 40th anniversary of Division III athletics.

Although she admits it’s a cliché, Hamilton says the teamwork she learned at W&L plays an integral role in her current job. From the front desk staff and lab workers to the nurses and research staff, “we are all working toward the same goal of helping our patients.”

Away from the lab and patient care, Hamilton is mother to 16-month-old daughter Patten. Her husband Justin, a former Air Force fighter pilot, is a pilot for Delta. He still flies the F-15E one week a month for the Air Force Reserves.

They moved to Nashville two years ago and are enjoying the “amazing culinary” opportunities in the city.

Nominating Hamilton for the NCAA 40-in-40 honor, W&L Sports Information Director Brian Laubscher summed up her achievements this way: “When I think of Erika, I see the perfect student-athlete more than just the athlete. Not only was she nearly unbeatable on the court (92-20 in singles and 104-27 in doubles), but she claimed a crazy good GPA as a neuroscience major. Today, she is Dr. Erika Hamilton. Pretty darn impressive.”