Exploring the Twists and Turns of Knot Theory Mathematics professor Elizabeth Denne helped design one of the Fleet Museum's most popular exhibits yet. 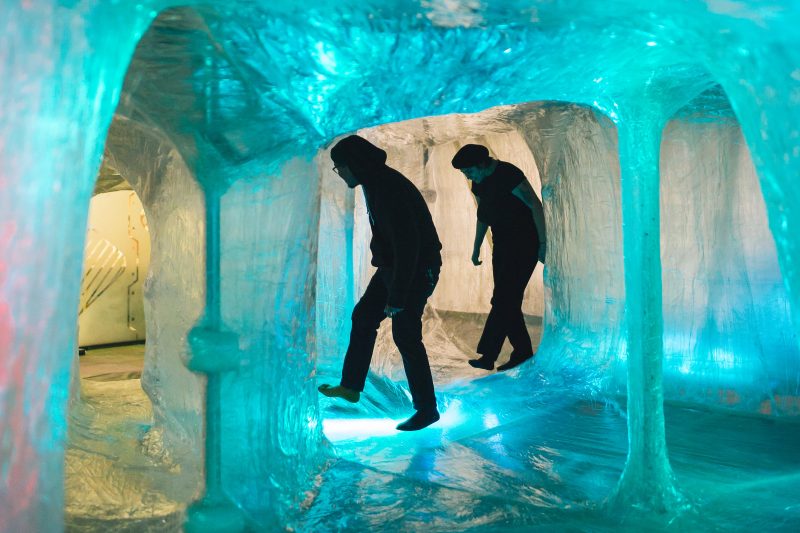 “Some writers are natural poets, some are better at novels, non-fiction, etc. It’s the same thing with mathematicians. I found myself reading about knots for pleasure, in my spare time, while I was studying mathematics.”

It is a world where art meets math, where visitors can walk – and crawl – through translucent, branching tunnels illuminated by rainbows of pulsating light. This is the awe-inspiring landscape that Elizabeth Denne, associate professor of mathematics, helped create in the Taping Shape 2.0: Why Knot? exhibit, which was on display at the Fleet Science Center in San Diego, California through Sept 30. According to the website, “surfaces curve, slope and twist. The ‘floor’ eases into the side of the structure, which gradually becomes the ceiling.”

Taping Shape 2.0, created by miles of packing tape wrapped over scaffolding, was a deeper exploration of knot theory, a part of the mathematical theories of geometry and topology; topology, in turn, explores how objects can be stretched and deformed as they move through space. Denne spent hours over Skype with California-based colleagues brainstorming how to use this enormous, colorful and immersive exhibit to explore the mathematics of knots. The result: one of the museum’s most popular exhibits to date, which was extended a month past its original end date.

When mathematicians study knots, they consider anything that is a closed loop to be a knot, Denne explained. “In knot theory, mathematicians spend most of their time developing tools to tell which knots are the same and which knots are different. In addition, the shape of the knot, thickness, curvature, tightness and more are dissected and explored.”

Why the public should care about knot theory is hard to convey – but care they should. “There is a lot of overlap with biology, understanding proteins and DNA molecules and replication,” said Denne. “Some of these molecules are knotted, and the knotting is part of the reason these molecules behave in the way they behave. Another practical application is understanding elementary particles in physics.”

For Denne, the true challenge of Taping Shape was finding ways to make knot theory resonate with people of all ages and educational backgrounds. “I didn’t know this before, but museum text has to be written at the 6th grade reading level,” she explained. “And while the questions that knot theory attempts to answer are simple enough to state, the answers can be incredibly complex.”

In addition to knot theory, topology and geometry, the exhibit also touches on spatial relations, membranes, mathematics and tensile strength. (And in case you’re wondering what happened to the miles of tape at the end of the exhibition’s run – it’s being recycled).

“Math has applications outside of just math, that can potentially change the world as we know it,” reflected Ashanti Davis, exhibits project supervisor at the Fleet Science Center and Denne’s partner in realizing the installation. Through Taping Shape 2.o, she hoped that visitors would realize “that math is a language and if you can learn to speak the language of another ethnic group, you can learn to speak math, too. That every day you tie your shoe, you are doing math and engineering. But most importantly, that math can be fun.”

For Davis, a self-proclaimed reformed “math-hater,” the process of creating Taping Shape 2 helped renew and strengthen her appreciation for math – a change of heart that she hopes exhibit visitors experienced, too. “The artist in me appreciates the beauty that can be found in math’s complexities, and the scientist in me appreciates the role that it plays in science and speaking to and about the universe,” Davis reflected. As an educator, she also marveled as joyful, wide-eyed students made their way through the exhibit; students who, like her, may have previously been wary of math. “I love getting to share with people how interesting these subjects are and how math, like most things, deserves a second, third, fourth, etc. chance at being cool,” she added. 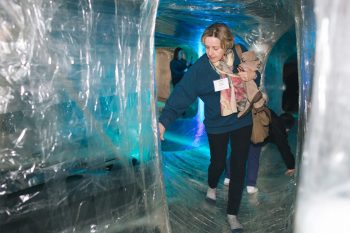 A visitor navigates the tunnels of Taping Shape.

Denne became interested in knot theory while studying mathematics as a graduate student at the University of Illinois at Urbana-Champaign. “Some writers are natural poets, some are better at novels, non-fiction, etc. It’s the same thing with mathematicians. I found myself reading about knots for pleasure, in my spare time, while I was studying mathematics. So I thought, I should probably just do my Ph.D on this.”

Denne also knits and crochets as a hobby. “My mother taught me when I was a child. I didn’t do it a lot in my teenage years, but in my mid- to late-20s, I became a fierce knitter. I enjoy the craft of it and making something to wear, as do all knitters. There is a neat overlap with my work, but it’s not intentional. I was knitting long before I was thinking about knots. And there is probably a paper in there somewhere, but I have yet to write it.”

Denne’s passion for knitting has managed to thread its way into the classroom in other ways, though. Denne has crocheted hyperbolic surfaces – or physical representations of mathematical objects – for use in her geometry classes.

Asked about her favorite part of teaching at W&L, she responded without hesitation: “It’s the interaction with W&L students. They’re such wonderful human beings, and they definitely keep you on your toes.” She was also pleased that W&L helped fund her trip to San Diego to participate in the exhibit opening in February.

Denne’s hope is that the public realizes that there is some mathematics behind the everyday experience of knots – we all must tie our shoes, after all – “there are some really interesting mathematical questions there, with answers that aren’t totally obvious.”