“My contributions to Mock Con have shown me a different side to service. Political participation is integral if we care about the well-being of our country, and Mock Con will hopefully inspire our community to vote, become policy makers, or even maybe run for office one day.” 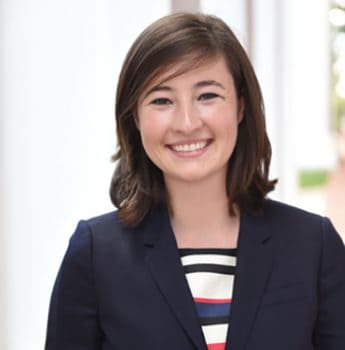 “Mock Convention, similar to the Shepherd Program, is something that you hear about from the first time you visit campus, so I knew I wanted to get involved early, especially since I would be a senior when the next Convention came around,” said Madison Smith ’16, a poverty minor and Mock Con’s event planner-in-chief. She joined the Mock Con team as the Social Committee events chair during her sophomore year, and helped plan last fall’s Presidential Gala as well as the upcoming parade and convention.

The 26th Mock Convention, Feb. 11-13, will involve the greater University community in one of the most ambitious student political research projects in the country. Madison said she aims to make sure everyone has a memorable experience, one that might also influence their willingness and passion to get involved in the political system in the future.

“I think that my contributions to Mock Con have shown me a different side to service,” she said. “Political participation is integral if we care about the well-being of our country, and Mock Con will hopefully inspire our community to vote, become policy makers, or even maybe run for office one day.”

An economics major who also is minoring in education policy, Madison spent the summer after her sophomore year in Can Tho, Vietnam, through the Shepherd Internship Program. While there, she created an independent research project, partnering with Can Tho University to interview members of the Hoa An community about their education system and personal education and well-being. This internship gave her an opportunity to sit down and listen to people who have never been given the opportunity to voice their opinion about education or government assistance.

“My biggest takeaway from the summer was simply that asking people what they want and need is the first step in the fight for poverty alleviation,” she said.

Since then, Madison has worked in the local community as a student-teacher at Waddell Elementary School and at Natural Bridge Elementary as an afterschool activities coordinator. She also served as the Nabors Service League education and youth outreach chair during her junior year. Mock Con has been her primary focus this year.

Madison is particularly excited about the Mudd Center-sponsored debate that will kick off Mock Con on Thursday in Lee Chapel. William Galston of the Brookings Institution will debate Peter Wehner, senior fellow at the Ethics and Public Policy Center, on a variety of issues relating to the ethics of citizenship. She thinks this will definitely be a don’t-miss event for anyone interested in poverty-related issues.

“While the topics of each speaker throughout the convention are unknown, I would encourage everyone to come to all sessions to hear about the current presidential race,” said Madison. “There will no doubt be interesting viewpoints from many of the speakers on the economy, government assistance and other poverty-related topics.”

Madison believes that the 2016 election has sparked a greater interest around the country in the political system and that people seem to be more engaged and invested in their candidate of choice.

“We are at a critical point where the presidential race could go in many different directions,” said Madison. “I think that what is most important about the 2016 election is that for those interested in poverty-related issues, our engagement does not end once the polls close. No matter who wins, we must still work to fight for poverty reduction and the promotion of justice in our country.”