Faculty Scholarship: Karen Woody and the “New” Insider Trading Insider trading is back in the news, although some would argue it never left. 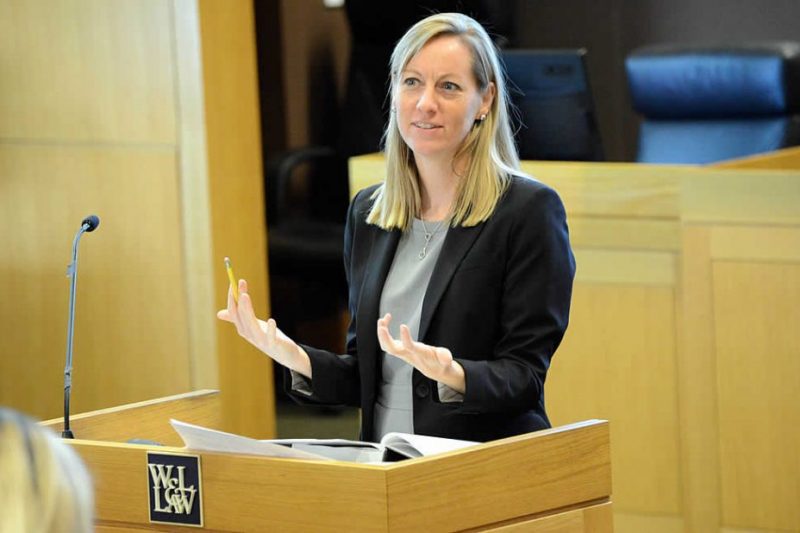 Karen Woody joined the W&L Law faculty in 2019. Her scholarship focuses on securities law, financial regulation, and white collar crime. She has published her work in a number of journals including the Cardozo Law Review, Fordham Law Review, and the Journal of Corporation Law, among others. Her work on conflict minerals is widely cited, and she recently testified for the U.S. House of Representatives Financial Services Committee regarding federal conflict minerals regulation.

Below, Prof. Woody discusses her article “The New Insider Trading,” which is forthcoming in the Arizona State Law Journal. The full article is available for download from SSRN.

Insider trading is back in the news, although some would argue it never left. Earlier this year, the U.S. House of Representatives passed the Insider Trading Prohibition Act, which seeks to create a new provision banning any trade of securities if the trader is “aware of material nonpublic information.”  If the bill is enacted, it would represent the first time the phrase “insider trading” has been defined by congressional statute.  Typically, charges of insider trading are brought under Section 10(b) and the SEC’s Rule 10b-5, which do not mention the term “insider trading” but instead broadly prohibit any “device, scheme, or artifice used to defraud,” as well as any “untrue statement, or omission, of material fact” in connection with the purchase or sale of any security.

Because the statute does not define insider trading, the scope of insider trading has been shaped almost entirely by common law, in the form of SEC administrative actions, and judicial opinions.  One of the reasons that regulation of insider trading is thorny is that it is not per se illegal to trade on inside information, especially in scenarios involving tippers and tippees. Pursuant to the foundational holding in Dirks v. SEC, in order to obtain a conviction for insider trading based upon a tipper-tippee theory, the government must prove that the tipper received a personal benefit for the tip, and that the tippee knew about that benefit.

The last five years of blockbuster insider trading cases have focused on this nebulous “personal benefit” test, and the Supreme Court has been unable to clear the muddy waters when it comes to defining insider trading that involves tips to outsiders.

In a forthcoming article, The New Insider Trading, I suggest that the hubbub in the courts and legislatures over the extent of the personal benefit test may be misguided. This is because there may be a simpler way to bring an insider trading case. Since the passage of Sarbanes-Oxley, there has been a somewhat sleepy provision of the criminal code that could present an end-around to the morass of insider trading cases brought under Rule 10b-5. Under 18 U.S.C. §1348, the government can bring an insider trading case under the more general umbrella of “securities fraud,” but this law rarely been used in prosecuting insider trading.

The elements required to prove a charge under §1348 are similar to other fraud-based offenses such as mail and wire fraud, health care fraud, and bank fraud, and require only that the government prove the existence of a scheme or artifice to defraud, and the intent to defraud, in connection with the purchase or sale of a security. Practically speaking, this means that the heavily-litigated personal benefit test found from Dirks may not apply to a charge of insider trading under §1348.

A case argued in the Second Circuit last November, and affirmed on December 30, 2019, highlighted this alternative method of charging insider trading. In United States v. Blaszczak, the defendant was acquitted of insider trading under the traditional Rule 10b-5 charge, but was found guilty under 18 U.S.C §1348.  In other words, the jury awarded convictions for securities fraud only under §1348 and not Rule 10b-5, despite the charges arising from the exact same set of facts and activity.

The Blaszczak case raised significant questions about the regulation of insider trading. One major question is whether the definitions of insider trading, including personal benefit, should be imported from §10(b) precedents into §1348 cases. Under our current common law, conduct that constitutes Rule 10b-5 criminal insider trading under the tipper-tippee theory exists only if the elements of the Dirks personal benefit test are met. If that test is not imported into the broader securities fraud regime of §1348, then §1348 ostensibly is creating a new prosecutorial avenue, and potentially a new definition of tipper-tippee insider trading.

Another fundamental issue is that proving the elements for §1348 likely is less burdensome than for proving those of §10(b), as evidenced by Blaszczak.  The practical consequence of this burden inversion is that it is much easier to convict for criminal securities fraud than it is for civil insider trading, despite both charges arising from the same set of facts. This means that a civil action brought by the SEC under §10(b) will be harder to prove, despite the lower burden of proof for civil matters, than the criminal action brought under §1348 for the same alleged activity. Insider trading regulation under Rule 10b-5, or under the newly proposed legislation, which retains and codifies the Dirks personal benefit test, may be bypassed entirely by §1348 and general securities fraud prosecutions.