Finding Her Niche Kelly Douma ’16 is on track to complete her doctorate in early modern German history and women’s studies by 2021. 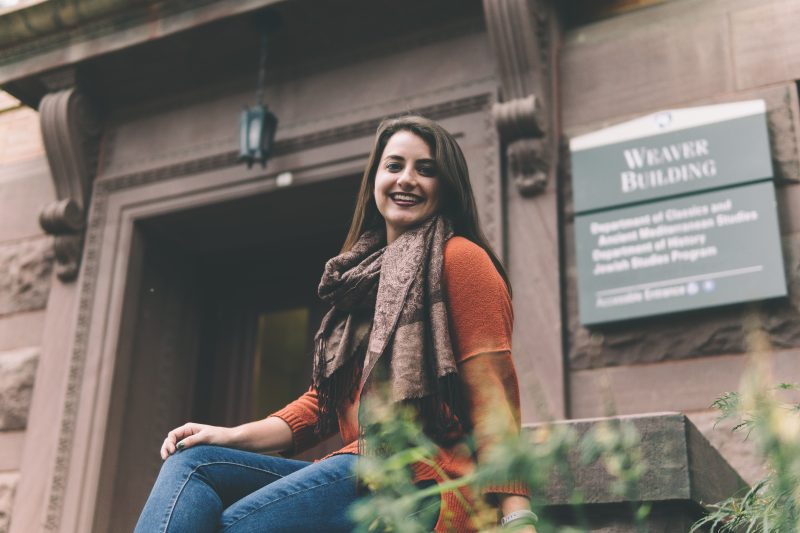 As a graduate student at Penn State, Kelly Douma ’16 is pursuing a doctorate in early modern German history and women’s studies. She found the path to her true calling through a serendipitous series of events, including a wise tip from a W&L alum, inspiration from her mentors in the German and History Departments, and a remarkably effective flier posted by the Office of Career Services.

“I came in knowing I wanted to be a history major (with an eye to attending law school). That’s unusual. Not many go in with that in mind; it’s just where they wind up,” she noted.

Her love of history was nurtured by an exceptional high school teacher and the extraordinary opportunity to collaborate on a project at the University of Richmond, where she researched the social status of African-Americans during the Civil War

“They took me on to be a grunt worker. There was lots of data analysis. I was searching for slang terms related to African-Americans in the Civil War era. I put them into a big data spreadsheet and the researchers then crunched the numbers and determined whether the terms were positive or negative. I am so glad I had that opportunity. I knew I was interested in history, and there I was sitting next to grad students from the University of Richmond,” she said.

She decided to pursue a double major in German after a conversation with an alum who expressed regret that he did not follow up on the foreign language requirement and become fluent in another language.

Duma enjoyed her German studies because the department was small, with only three faculty members. She spent countless hours there, not only in class, but also as work-study student and liaison to the German Club. Her advisor, department chair Paul Youngman, became a mentor, friend and advocate for her pursuit of an academic career.

Douma’s language and history interests merged in her junior year as she began taking classes in women and gender and sexuality studies. At the same time, she became intrigued by the research of her history advisor, assistant professor Michelle Brock.

“She works on demonology and witch hunts. Going off of that, I found my own niche — childbirth and midwifery in the 16th century. They are all connected. You can’t separate religion out in the 16th century. I started looking at issues such as abortion, infanticide and abandonment,” she said.

It was at that point that the fateful Career Services flier came into play. The message was provocative — “Don’t become a lawyer by default.”

“That sign changed my mind, and probably others too,” she said. “I walked by it 10 to 15 times a day, and it finally sunk in. I told Professor Youngman that I didn’t want to be a lawyer, and he said he knew I didn’t because he had seen my writing and my passion for research.”

She went on to write an honors thesis on female sexuality in the early modern period that won accolades. That research is now providing the foundation for her master’s thesis.

As a graduate teaching assistant at a large university, Douma has an even greater appreciation for the small classes and close relationships she formed at W&L.

“I think without W&L I wouldn’t be where I am today academically. Not many people go straight into doctoral programs. The small classes made a big difference. I remember a class with Professor T.J. Tallie in which there were only four students. It was like a graduate seminar. It taught me how to speak and think critically. You also develop close relationships with faculty members on a personal level, and you find you can hold your own with them. You go to their offices and talk out your future with them. They are so encouraging, and there is such a sense of community, even after graduation,” she said.

Douma is on track to complete her doctorate in 2021. Her ultimate goal is to find a teaching position, preferably at a small liberal arts school (W&L being her first choice, naturally) where she can give her students the kind of inspiration and encouragement that made such a difference to her. Who knows? She may even spare future historians from becoming lawyers by default.