Finding Passion and Purpose in the Law An externship in DC gave Ali Hakusui '18L a chance to do something different, and find new meaning in the law. 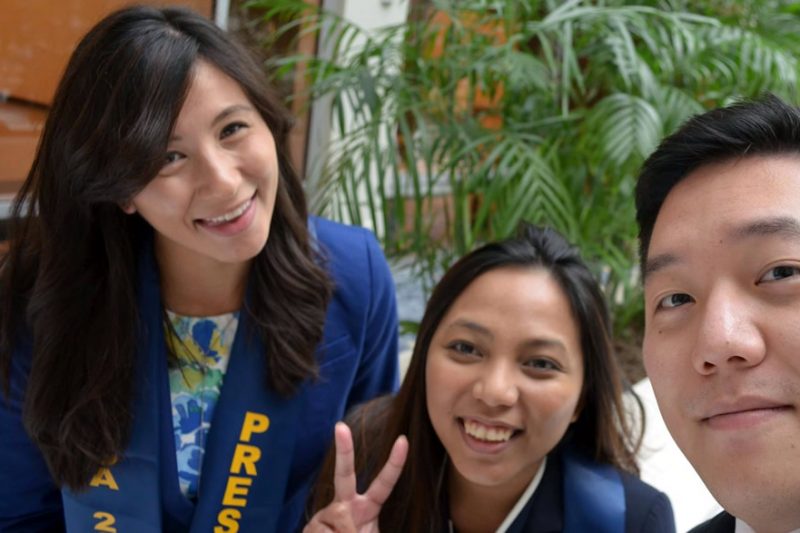 Ali Hakusui, a 3L from Haverhill, Massachusetts, received her undergraduate degree from Bates College. She spent the fall semester in the DC as a law clerk in the policy office of the National Asian Pacific American Bar Association (NAPABA).

Everyone has occasional instants of conscious awareness that force them to pause and take inventory of the choices that led to that moment. I had one when I was holding a ACLU “No Muslim Ban Ever” sign over my head, spending the better part of my lunch hour chanting and marching alongside hundreds of other people. The leaders among the crowd were dressed in casual attire, sporting graphic t-shirts that added more verbiage to the sea of quotes being carried or worn. A few Vietnam-Era protesters had dusted off their tie-die to join the effort. Others, like myself, were in business formal. If not for the posters, a bystander would probably have assumed we had been swept away by the crowds on the way to a working lunch.

And so, in a swarm of varying archetypical demonstrators, I reflected on everything that had led me to this scene. I was never someone that you would call a “social justice warrior”: I spent my college years in the apolitical vacuum of a lab and my law school years pursuing a career in the private sector. At some point last spring, I realized the DC externship program could be my last chance to try something completely different, like public interest/non-profit work. I wanted to do something meaningful.

I enjoyed organizing minority affinity groups as a student, so I applied to be the law clerk in the policy department of the National Asian Pacific American Bar Association (NAPABA). I had worked with NAPABA in my capacity as President on their law student affiliate, the National Asian Pacific American Law Student Association (NAPALSA), but only to plan our yearly joint convention. I knew NAPABA had a policy department, though the specificities of what the branch did was a mystery to me.

On my first day, my supervising attorney talked me through what the policy department does: the attorneys draft legislation, coordinate the NAPABA yearly policy resolutions, issue press releases, author reports, and generally garner support for various causes. NAPABA is a non-partisan organization, which adds an extra layer of complexity to the job. The energy in the office was unlike anything I had experienced: Someone was cursing down the hall about the latest round of edits to a report, the next office over someone else was listening House floor hearing, and[almost] every time the president tweeted out an executive order, there was a moment of chaos as the policy machine rushed to respond. The office was alive with passion.

That passion was contagious. The months I spent with NAPABA gave me invaluable experience. I drafted bill summaries, penned the memo supporting a pro-PSLF (public service loan forgiveness) policy resolution, attended the ACS Supreme Court Preview and the 60th Anniversary for the Commission on Civil Rights, used my Bluebook to cite my way to an acknowledgement on the 2017 NAPABA Language Report, and even got to research a comedian. At the NAPABA Convention in November, I was surrounded by more than 2,200 Asian Pacific American attorneys and filled with a sense of community and purpose.

My semester ended with sobering task: drafting language for a bill that will prevent Korematsu v. US from being used a legal precedent. Walking through the failures of our justice system is a necessity if we, as a nation, are to grow into a better country. Going forward in my career, I may not be the person on the ground, going tête-à-tête for a more compassionate world, but I want to do everything I can to support those who dedicate their lives to this work. This semester showed me that I can find my passion in a legal career, and I will never forget that.