Food for Thought Joe Franzen ’06 cooked up a food-literacy program that helped turn around a failing high school. 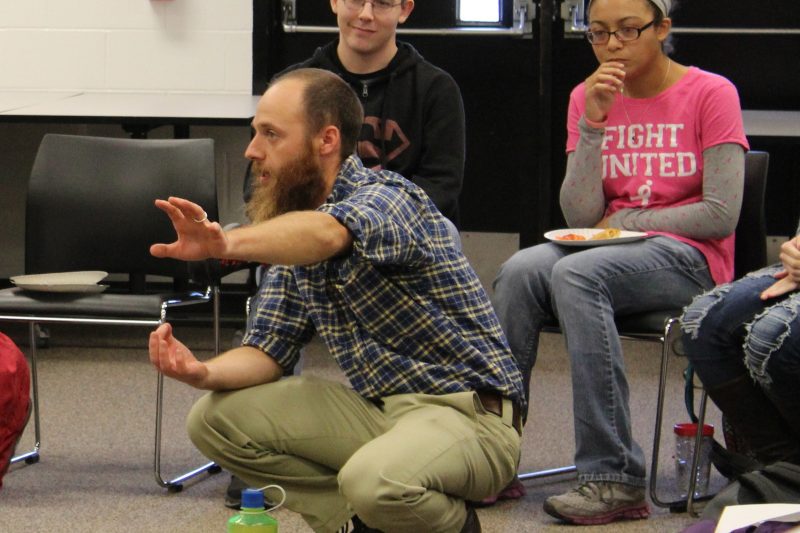 Joe Franzen ’06 engages with his students through his food-literacy program.

When it comes to getting students to engage with school, how do you get them to bite?

Joe Franzen ’06 decided the answer was to give them something appetizing — food. As a social studies teacher (2010-17) at Fern Creek High School in Louisville, Kentucky, he partnered with English teacher Brent Peters to design and implement a food-studies program, which he describes as “a mash-up of culinary arts, English, agriculture, environmental studies, philosophy, community activism, social studies and just about everything those disciplines touch.”

The program worked. Students at Fern Creek scored higher on assessment tests, and Franzen and Peters decided to develop a pedagogical guide for other teachers looking to improve students’ “critical literacy skills in a statistically meaningful way.” Their book, “Say Yes to Pears” (National Council of Teachers of English, 2019), includes students’ essays and family recipes that they hope will appeal to a wider audience interested in “the reality of public education.”

His first placement under the Teach Kentucky program was in a seventh-grade social studies class at a Shelby County middle school. He began using food as an avenue for students to explore their identities, particularly through family recipes. The approach resonated with his pupils, who eagerly engaged with the subject matter, especially through hands-on activities, such as cooking and creating a school garden.

He realized that food was a pathway to make learning connect with every student and pulled from his formal and informal educational experiences. While studying history with Harvey Markowitz, assistant professor of anthropology at W&L, Franzen “learned how food, culture, identity and place tied together.” Markowitz, who had lived on a Navajo reservation and worked for the National Museum of the American Indian, “guided students in exploring the interconnectedness of religion, landscape, food and culture in Native American communities and took students to those communities where he shared his friendship and knowledge.”

In 2010, Franzen met the principal of Fern Creek High School in neighboring Jefferson County, at that time labeled a failing school by the state. By then, Franzen had purchased a house and turned his lawn into an urban farm. He invited the principal to his home and served him an omelet from eggs gathered from his chickens and peppers harvested from his yard. Over the meal, the principal offered him a job with the mandate “to help rebuild his school community.” Franzen was given the autonomy and freedom to experiment with interdisciplinary studies, leading to his food-literacy program.

At Fern Creek, Franzen partnered with Peters — an English teacher and former chef — to create a food-studies program around food lit, food sociology, global issues, a cooking club, Cooking 101 and an environmental club. The goal was to empower students “to critically engage with every text around them,” explained Frazen. “Food was a contextual theme used to understand, explore, engage and evaluate the world for themselves.” Students read “The Great Gatsby,” “Otello,” “The Kite Runner,” “The Piano Lesson” and others and became a “community of learners, explorers, thinkers, writers and activists in a school most people thought was the dregs. Students were able to adapt their newly acquired literacy skills to various situations — from multiple-choice questions to writing their own food narratives.” By the end of the first year, students in the school’s lower-level English class were “performing close to the level of our advanced-placement-track students.”

Now teaching global studies at Cuba Rushford High School in western New York, Franzen still incorporates food literacy into his lessons. To teach his students about The Neolithic Revolution, the transition from hunter-gatherers to farming, he turned his classroom into a bakery to demonstrate “how bread drastically changed how people interacted with food.” For the Paleolithic period (hunters-gatherers), he introduced his students to alligator, squirrel and moose meat. In another class, students learn to make a dish from each region of the world: peanut soup from West Africa or pita from Bosnia-Serbia. “Students are learning to connect with people on the other side of the world.”

Franzen continues to explore the limits of food literacy. He hopes to teach students tree grafting with heritage trees from regional farms and start a student-run soup-catering service for faculty and staff. He began a cultural investigation project, where students have investigated their food heritage. Many brought in recipes from what Franzen described as “a massive connection to Polish heritage.”

Married and the father of Hazel, 2, and Eleanor, 4 months, Franzen believes the path he has chosen leads students to connect “with people not only around the world but also across the table.”