W&L Friends of the Library Honor the Higginbothams 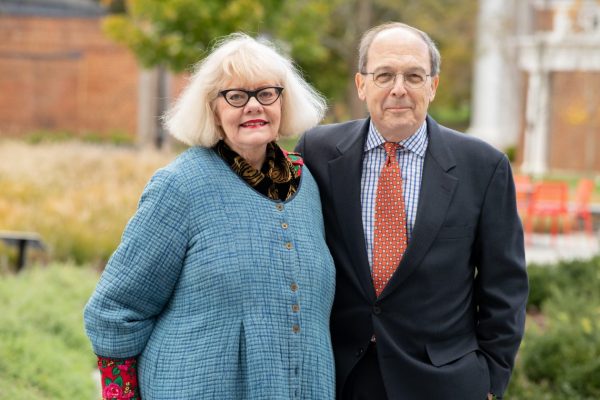 Barbra and Hal Higginbotham ’68 recently visited campus this fall to attend the first endowed university librarian lecture at Washington and Lee. A few months earlier, as part of Hal’s 50th reunion class gift, the couple established an endowment to name the head librarian’s position and to support special opportunities and resources for Leyburn Library.

John Tombarge, the Hal F. and Barbra Buckner Higginbotham University Librarian, delivered his lecture on library leadership in the 21st century, exploring how libraries at liberal arts institutions are preparing for the future.

Following the lecture, the Friends of the Library recognized the Higginbothams with the John Rogers Award. Established in 2008, the award honors those who have given extraordinary service and multi-faceted support to the university library over a long period of time. John Rogers, the award’s namesake, gave Washington Academy its first major gift of books in 1800.

Friends of the Library Washington and Lee has received a $2.5 million gift from Hal F. and Barbra Buckner Higginbotham to endow the university librarian position. 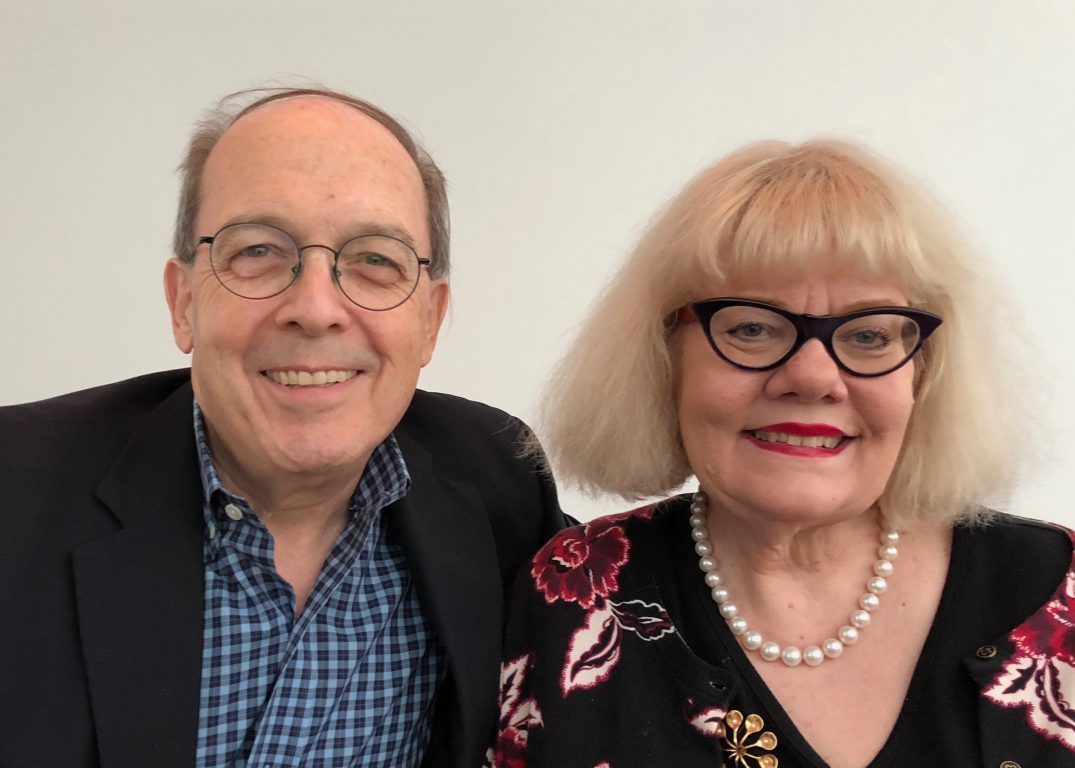 Barbra and Hal Higginbotham ’68 both remember where they sat in the library to study at their respective universities.

For Barbra, it was a specific carrel while working on her undergraduate degree at Centenary College of Louisiana. For Hal, it was in the reading room on the second floor of McCormick Library, now Huntley Hall. “It was a warm, inviting space when I was a student,” he said. While on campus in 2015 to co-teach a Spring Term class with Professor Bob Strong, he paid a visit to that spot. “It was eerie to walk into that space 50 years later. It’s still being used by students, but it’s now a classroom.”

The Higginbothams believe libraries are more than just the intellectual heart of a university. “They are the most democratic of departments,” said Barbra. “All students make their way there, whether a physics major or an English major. We invested in the library to benefit students of not only today, but also those to come. I hope they will remember where they sat and studied.”

In fact, while Hal co-taught College Conundrums (Politics 294), which focused on higher-education issues, Barbra audited an English class and often made her way to Leyburn to do her reading assignments. “We were extremely happy to see how well-used the spaces were, especially after the 2009 first-floor renovations,” she said.

“We knew it was a leap of faith for the university to make that investment,” added Hal. “We wondered if those changes were made, would students come? But it’s now a more inviting space, more welcoming, and obviously very popular with faculty and students.”

This spring, as part of his 50th reunion class gift, the couple established an endowment to name the head librarian’s position. The $2.5 million gift, a charitable deferred irrevocable pledge to the university through their estate, will support special opportunities and needs of Leyburn Library in enriching the university’s academic mission as determined by the university librarian in consultation with the provost. The Higginbothams intend to begin funding the endowment with occasional outright gifts. Their financial contribution also helped the Class of 1968 achieve a record-breaking gift of just over $11 million to W&L during Reunion Weekend.

“This gift is of great significance,” said Marc Conner, W&L provost. “It confirms the central role of the library in the university’s academic mission. The library is at the heart of the pursuit of knowledge and the critical gathering of information. This gift honors the work of our library faculty and staff and helps support and augment that crucial work during a period when libraries are transforming in very exciting ways.”

“Needs, times and circumstances change,” said Hal, “but the library remains central to W&L’s educational mission. Augmenting that space and providing resources for Leyburn Library will allow it to continue to serve the best interests of students and scholars for many years.”

“Barbra and Hal are interesting and thoughtful supporters who understand higher education and its importance to students and our society,” said Dennis Cross, vice president of University Advancement at W&L. “They have a special fondness for W&L and its commitment to the liberal arts and to its distinctiveness and high quality. They invest their resources with care in areas of personal interest and high priority for W&L. Their ongoing support of the library is a gift to every student and professor at Washington and Lee.”

As the former chief librarian and head of academic information technology at Brooklyn College, Barbra oversaw the renovation and expansion of that library into a state-of-the-art, 300,000-square-foot facility. She noted, “It’s vital to ask people on the ground what is needed. This endowment will add to W&L’s resources, and its use will be guided by the university librarian and library staff. That was important to me.”

The couple also believe that the endowed librarian’s position, one of only a handful of similar positions across the nation, makes an important statement to prospective job applicants. “This shows candidates that the university regards the library as central to its mission, and I think it will help bring in the best people,” said Barbra. “We think the more named chairs the university has, the more its reputation will flourish,” her husband added.

John Tombarge, university librarian, will hold the named position. His research interests include investigating the leadership and management styles of college library directors and determining the impact on planning and organization. “We have full confidence in John,” said Hal. “His goals, thoughts and philosophy seem well-matched to W&L’s needs and interests.”

“The endowment will provide much greater flexibility to enrich the educational opportunities found at Washington and Lee,” Tombarge said. “Now that the university library is home to an academic minor, Digital Culture and Information, the bond between the library and students and faculty will grow much tighter. No longer the single gateway to information, the library must be creative and flexible as it addresses its greatest challenges — teaching students and faculty to work effectively with digital information without lessening the importance of the printed record. Flexibility is key, and flexibility is what the endowment will provide.”

He then began a 30-plus-year career at the College Board in New York City, a nonprofit membership association that connects students to college success and opportunity. He retired from that position in 2013 as senior vice president in the Office of the President.

Barbra Higginbotham received an undergraduate degree in English literature from Centenary College of Louisiana and an M.A. and Ph.D. in library science from Columbia University. Prior to joining Brooklyn College, she was head of original cataloging services and then head of access services at Columbia University. She is the author of “Our Past Preserved: A History of American Library Preservation, 1876-1910” and “Access Versus Assets: A Comprehensive Resource Sharing Manual for Academic Librarians.”

The couple, who competed on the high school debate team together, have been generous supporters of W&L for many years. In addition to their support of the Annual Fund, the Higginbothams have manifested their passion for books and learning through the establishment in 1986 of the Barbra B. and Hal F. Higginbotham Library Endowment. Their love of ceramics has been expressed through gifts to the university’s Reeves Collection and the commissioning of a tea set for use in the Senshin’an Tea Room in the Watson Pavilion.