From Japan to Lexington A pair of Bijin, or beautiful women, made in Arita, Japan, between 1690 and 1720 are the first of their kind in the Reeves Museum of Ceramics at W&L. 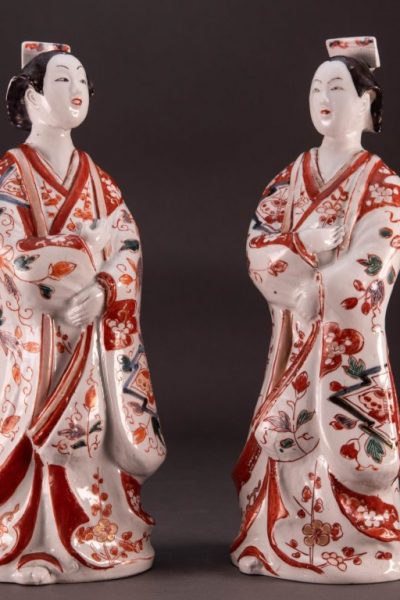 With their elaborately patterned robes and extravagant hairstyles, these figures that were recently acquired by the Reeves Museum are fine examples of bijin, or “beautiful women.”

The term usually refers to courtesans (a polite term for high-class prostitutes) in Edo-period Japan (1603-1868). The exploitation and difficulties of the life of a courtesan were often hidden behind a veil of glamour; with their fine cloths and erotic allure, courtesans were the fashion icons and celebrities of their day, admired by both men and women. They were often the subject for ukiyo-e, or “pictures of the floating world,” which are woodblock prints showing aspects of the pleasure quarters that flourished in cities like Kyoto and Edo (modern-day Tokyo). Bijin were also depicted as dolls, which may have inspired porcelain figures like these.

Porcelain figures of bijin were made from about 1660 to 1740, ranging in size from 6.75” (17.3 cm) to 19” (48.5 cm). They are almost always wearing elaborately patterned kimono in either the Imari palette of red, blue and gold (like these) or the soft, polychrome Kakiemon palette. Bijin figures were made for both the Japanese market and for export to Europe. In Japan, they could have been used by men to evoke the pleasures of the “floating world” of courtesans. They were also seen as valuable collectables, illustrated in books of desirable antiques, and the subject of poems.

In Europe, where it is likely that few, if any, realized that they were depictions of courtesans, bijin figures would have been prized simply as an exotic depiction of Japanese women. They must have been very expensive; all of the bijin figures whose original owners are known belonged to extremely wealthy aristocrats and royals, such as Augustus the Strong, Elector of Saxony and King of Poland (1670-1733); the Counts of Solms-Laubach, who had “three Arita figures of women, colored” in 1741; and the royal family of Sweden, who had at least nine bijin in the Chinese Pavilion, a cottage at their palace at Drottningholm.

Figures of Bijin could be made singly or in pairs, like the “Two large Japanese Woman figures, well dressed, and beautiful colours” that were part of the collection of Japanese porcelain assembled by the Dutch nobleman Johan Hendrik van Wassenaer Obdam (1683-1745) to furnish his grand townhouse in the Hague. However, they rarely survive together, making these two all the more special.

The Reeves Museum contains one of the larger collections of Japanese export porcelain in the United States, but up until now, it had no figures. This pair helps fill that gap nicely.