Generating Retirement Income through the Charitable Remainder Unitrust Robert Swinarton ’50 recalls his years at W&L and shares about giving back with a charitable remainder unitrust. 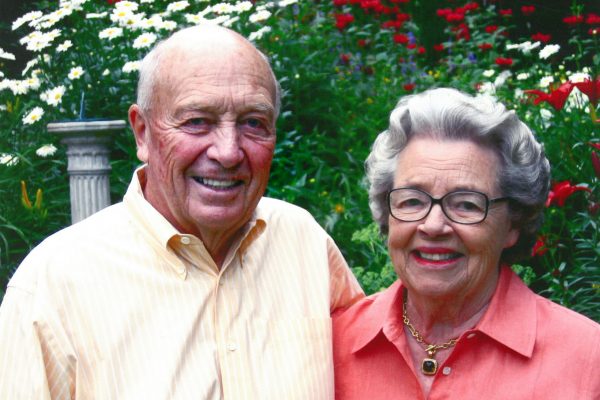 Robert Swinarton ’50 served in the Army Air Force during World War II and attended W&L on the G.I. Bill. He and his wife, Roddy, were married during the summer before his senior year at W&L. They made it a priority to give back to W&L in gratitude for all that the university has meant to them over the course of their lives.

The environment at W&L was transformative in the sense that everything you did was governed by the Honor System. You were your own disciplinarian. I had never experienced anything like this, and it made an impact that stayed with me throughout my business and personal life. I attribute my success in business to this.

In addition to the Honor System, we had a dress code and a speaking tradition. The latter required you to acknowledge everyone you crossed paths with while on campus. The dress code meant you had to wear a coat and tie whenever you went out, except if you were dressed for sports. This was our environment, but equally as impressive were our relationships in classes and with faculty. In the business school, classes were small, seldom over 10 students, and your professor was not only your teacher but your friend. The academic life was most inspiring because of the faculty.

W&L was not only my platform for entering business life but also became the start of our married life. Because it was after the war and many students were older, W&L had plenty of housing for married students. My wife, Roddy, and I were married before I commenced my senior year, living in an army prefab along with 32 other veterans. It could not have provided a better start to married life. Graduation was in 1950, the same year I started at Dean Witter & Co, where I worked until my retirement in 1980, starting as a sales trainee and ending as vice chairman of the board of the second largest securities firm.

Obviously all of the above made a tremendous impression on me and made me feel indebted to the school for what it had provided to me. In 1992, I decided I wanted to give back something for what I had been given. Roddy and I created two 6 percent charitable remainder unitrusts, one to benefit Roddy for her lifetime and the other to benefit me for my lifetime. We delivered appreciated securities to the trusts and received an immediate charitable deduction which was a write off against our income. These securities would have represented a large capital gain, but we had no capital gains tax to pay because the money was going to a charity.

Each trust pays 6 percent of its Dec. 31 market value each year for as long as we live, and the school receives no money until both of us are deceased. As Roddy passed away in November 2016, her charitable remainder unitrust provided a $165,421 unrestricted gift to Washington and Lee University; mine is still ongoing, providing me retirement income.

It was a good feeling to be able to give back. The only reason I was even able to go to college was because of the G.I. Bill, right after World War II, so I am indebted all around.

To learn more about the charitable remainder unitrust or to talk with W&L about your estate plans, contact W&L’s office of gift planning at 540-458-8902.