Gerry Simpson to Lecture on History of War Crimes Law 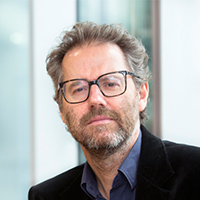 Professor Gerry Simpson of the London School of Economics (LSE), one of the world’s top scholars of international law, will deliver a public lecture titled “One Hundred Years of Turpitude: A Counter-History of War Crimes Law.”

The talk is scheduled for  Thursday November 8 at 9:30 am in Classroom A, Sydney Lewis Hall. The lecture is free and open to the public.

Simpson was appointed to a Chair in Public International Law at LSE in January 2016. He previously taught at the University of Melbourne (2007-2015), the Australian National University (1995-1998) and LSE (2000-2007) as well as holding visiting positions at Harvard Law School (1999) and the State University of Tbilisi where he was an adviser to the Georgian Ministry of Foreign Affairs. He is the author of “Great Powers and Outlaw States” (Cambridge, 2004) and “Law, War and Crime: War Crimes Trials and the Reinvention of International Law” (Polity 2007), and co-editor (with Kevin Jon Heller) of “Hidden Histories” (Oxford, 2014) and (with Raimond Gaita) of “Who’s Afraid of International Law?” (Monash, 2016).