Grand Slam for Little Hands What A Racket, a nonprofit community service organization founded by Catherine Savoca '19, teaches Rockbridge-area kids the fundamentals of tennis and fitness. 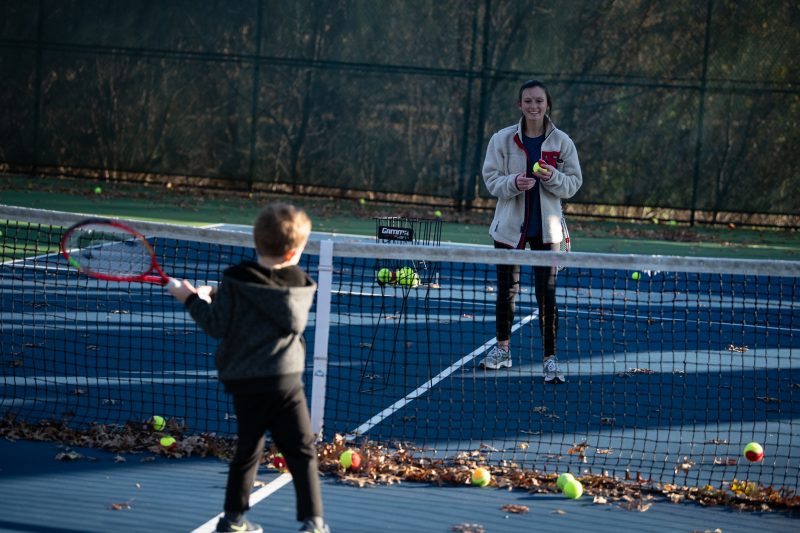 Catherine Savoca ’19, who founded the What a Racket tennis program during her junior year at W&L, tosses tennis balls for Finn Goodwin during the November 2018 clinic.

Most Sunday afternoons in late autumn are quiet times on the W&L campus, with students hunkering down in dorms and the library to study. However, on one Sunday per month, anyone who wanders near the lower tennis courts near Woods Creek will hear children’s laughter and the thwack of tennis rackets swatting balls. This is What A Racket, where W&L students teach tennis to local kids.

Catherine Savoca ’19, president of What A Racket, started the program with her sister in their hometown of Columbia, South Carolina, in 2013. When she came to Lexington, she realized there weren’t many opportunities for local children to learn tennis, so she decided to bring a chapter of What A Racket to the city. She established the chapter in 2017, her junior year, and it was recognized by the Executive Committee in September 2018.

“I reached out to local churches to see if we could gauge any interest,” Savoca said. “There was actually a lot, and they’ve been super supportive, so I found the first group of kids, created a leadership team and looked for tennis courts to play on once a month on Sundays.”

The first few clinics were with about five or six children, but the program has since grown to around 30 children at each event.

Savoca said that a growing number of parents and families started to become interested in sending their children to the club after seeing children enjoy it. “We have a pretty consistent participant basis and I think the kids really like it. It’s a great way to bring kids together from different schools in a fun and friendly atmosphere.”

Josie Hurst ’19 gets a sweet hug from Vivienne King while her twin sister, Lilianne, looks on.

Coaches at What A Racket are students who played tennis in high school or growing up, including two members of the W&L tennis team and one who used to be. The club matches coaches and children with their level, creating responsive practices.

“We usually teach some kind of fundamentals like forehands and backhands, but we also mix it up for the little kids and do a little bit of hand-eye coordination,” Savoca said. “It helps them later on when they’re actually learning to play.”

One of the hand-eye coordination exercises for little children is called “ice cream,” in which a child uses a cone to try and catch a ball thrown by a coach. This practice teaches a child to keep an eye on the ball while coordinating his body to catch it.

The clinics are open to W&L children and local kids with no connection to the university. It is advertised largely through word-of-mouth. Local resident Amy Holton, who has an 8-year-old son and a 10-year-old daughter, sent both of her children to the clinics after hearing about them from a friend.

“It’s a great introduction to tennis,” Holton said. “It’s good to see children having fun there.”

In addition to word-of-mouth, the What A Racket leadership team created pamphlets and passed them out at local churches and a bookstore. Josie Hurst ’19, the club’s marketing chair, made a Facebook page to encourage information-sharing about the clinics.

According to Savoca, What A Racket has also received support from the W&L community.

“I coordinate with our athletics department. [Associate Athletic Director] Elizabeth LeRose has been super helpful,” Savoca said. “There’s a schedule for reserving the courts and I just have to tell her the dates a month prior. We set it up and then we have the courts for the afternoon events.”

LeRose not only helped Savoca coordinate the tennis court, but also encouraged her children to attend several What A Racket clinics.

“The opportunity is great,” LeRose said. “Initially they were shy, but they had a great time and learned tennis.”

What A Racket also provides each child who joins the club with a free tennis racket, drinks and snacks. This was previously funded by donations, but it is now provided by funds from the EC. Savoca is grateful for the support of the W&L community.

“As long as we have enough coaches, and as long as people are interested in it, I hope to see it grow,” she said. “Anybody from the community is welcome.”

For more information about What A Racket, visit the club Facebook page. 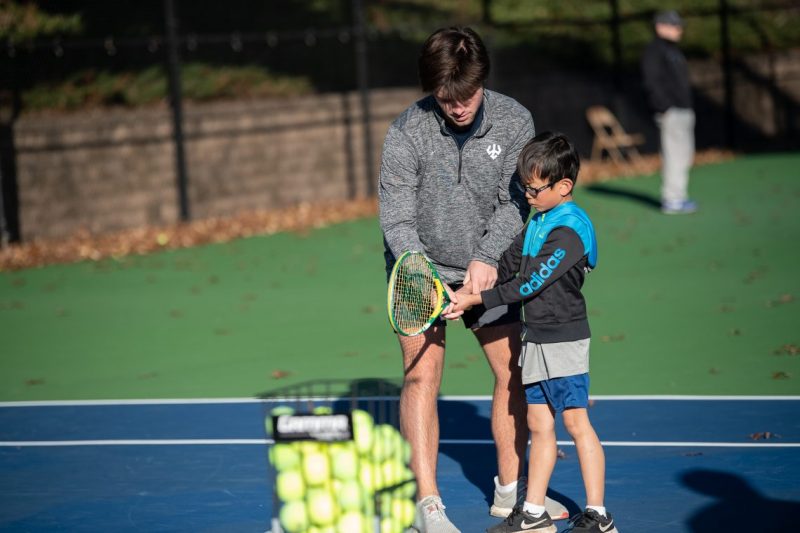 Hal Fant ’22 teaches Kai Frein how to hold a tennis racket at a What a Racket tennis clinic at W&L.