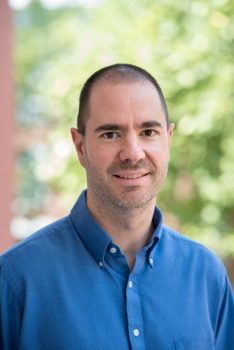 Peter Grajzl, Ehrick Kilner Haight, Sr. Associate Term Professor of Economics, will give a talk titled “A Structural Topic Model of the Features and the Cultural Origins of Bacon’s Ideas” on Mon., Feb. 12 at 5:00 p.m. in Northen Auditorium.

The talk is in honor of the Ehrick Kilner Haight, Sr. Term Professorship and is free and open to the public.

Having witnessed the birth of a country, the accompanying change in the political system, the transition from socialist to market economy, and having been inspired by his Ph.D. dissertation adviser, Professor Grajzl chose a research path focused on comparative institutional economics, law and economics, and political economy. He has published on a range of topics pertaining to the emergence, the functioning, and the impact of different legal, political, and economic institutions and modes of governance, as well as cultural beliefs, in multiple parts of the world.

The Ehrick Kilner Haight, Sr. Term Professorship was established in 2008 by Richard Allen Haight ’84 and is a permanently endowed fund at Washington and Lee University. It provides support for a faculty member in the Williams School of Commerce, Economics, and Politics and recognizes a different professor every three years.