Greg Hunt ’97 Honored for Counterterrorism Work The FBI agent credits his father, the Honor System and his W&L education with shaping his career. 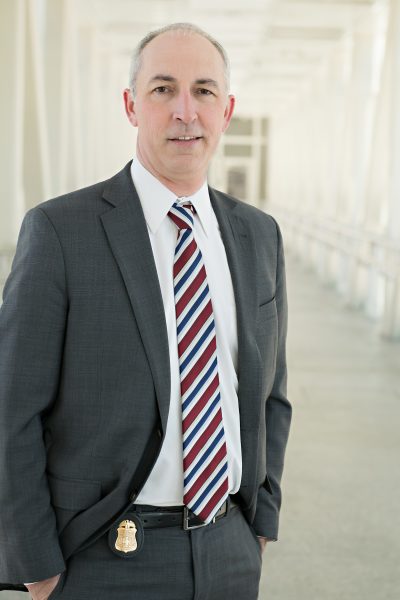 As a kid, Greg Hunt ’97 was intrigued by the professional adventures of his dad, an FBI agent who worked several high-profile investigations in New York during the ’80s and ’90s. But Hunt wanted to carve his own career path, so he followed up his W&L history degree with a J.D. from the University of Richmond, then took a job with a Roanoke law firm.

In 2006, two events caused Hunt to reconsider: His first child, a son, was born, and his father, Paul, who had recently retired from the FBI, suffered a fatal heart attack after running a 5K. “My dad was one of the hardest-working people I have ever known, and, as an agent, he worked tirelessly to protect others,” Hunt said. “I don’t think I appreciated what motivated him until I had children of my own.”

Today, Hunt is the Joint Terrorism Task Force coordinator for 24 counties in Southwest Virginia, including Rockbridge. He is based out of the Roanoke Resident Agency. His work is mostly classified, but a 2016 case grabbed international headlines.

On Aug. 10, 2016, Hunt provided Royal Canadian Mounted Police (RCMP) with intelligence about an impending terrorist attack. The RCMP intercepted Canadian Aaron Driver, 24, who had just left his home with a homemade explosive device. According to Canadian newspaper The Globe and Mail, Driver was about to leave in a taxi, and had just requested a ride to a popular shopping and recreation area. When confronted by authorities, Driver detonated his device. He was killed by the RCMP during the encounter.

“He wanted to detonate an IED and kill as many Canadians as he could,” Hunt said. “Fortunately, the Canadians were able to act on the information quickly.”

In October 2017, Hunt and his family, including his wife, Cassie Ritter Hunt ’01, director of advancement operations for W&L, traveled to FBI Headquarters in Washington, D.C. There, Hunt, along with others who had worked the case, received the 2017 Director’s Award for Excellence in Counterterrorism. They have since received a SHIELD Award from the Anti-Defamation League, as well.

“They’ve given me entirely too much credit, if you ask me, but it was an interesting case to work on, and I was glad I was in a position to make a positive contribution,” Hunt said. “Everybody works together. I was the case agent, but it took a village, as they say, including personnel from FBI Headquarters, FBI offices around the world, and our Canadian counterparts.

“I do this work because once you are exposed to it and see the threat that is out there, you can’t ignore it,” Hunt said. “It would haunt me if I didn’t do something about it. If I could unlearn what I know about the counterterrorism threat, I would — and I would probably sleep better at night.”

As he looks back on his education, Hunt can see parallels between the W&L Honor System and the FBI’s core values of respect, fairness, compassion, accountability, integrity, leadership and diversity. “Those seven words capture the Honor System,” he said. “We kind of get those values from our parents, but it was at W&L that I first chose those as my own values and owned them.”

The small classroom setting at W&L pushed Hunt to hone the communication skills he calls on every day at work. “You can’t hide in a W&L classroom. Everyone is challenged to think critically, and encouraged to express his or her thoughts. Critical thinking and the ability to communicate, both orally and in writing, are essential skills for any investigator.”