Guse to Give Talk in Honor of John C. Winfrey Term Professorship 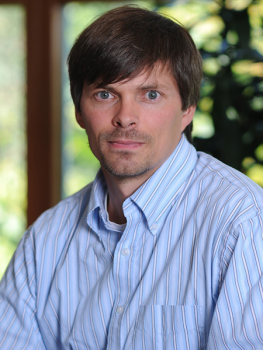 Joseph Guse, John C. Winfrey Associate Term Professor of Economics, will give a talk in honor of his professorship on Tues., April 3 at 5:00 p.m. in Northen Auditorium. The public talk is titled “Economics Ph.D. Department Rankings from a New Dataset on Graduate Student Output and Advisors.”

Professor Guse joined the Department of Economics in the fall of 2005. He studied natural resource economics at the Yale School of Forestry and Environmental Studies, where he earned a master’s degree. He earned a Ph.D. in economics from the University of Wisconsin-Madison. He teaches Microeconomic Theory, Game Theory and senior research seminar courses and co-teaches courses related to the culture, history and economies of the Lakota and Tohono O’odham tribes with professor Harvey Markowitz. His research interests include the effect of legal institutions and access to credit on Native American economic development, the role of advising in Ph.D. programs, and the impact of federal commercial development subsidies in urban areas.

Established by an anonymous trustee and his wife to honor Professors David G. Elmes, Lewis G. John and John C. Winfrey, the Elmes, John and Winfrey Professorship is a permanently endowed fund at Washington and Lee University providing support for a faculty member in the College or the Williams School. This award recognizes a professor for a fixed term, normally three years.