Harrison Pemberton, W&L Professor of Philosophy Emeritus, Dies at 92 Pemberton taught at W&L for 42 years, from 1962 until 2004. 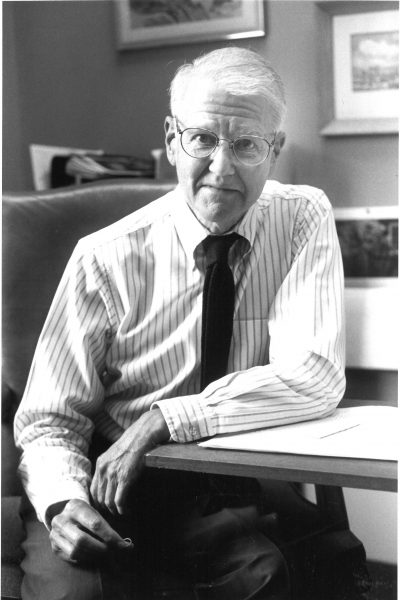 “Harry Pemberton enjoyed a long and fruitful career at W&L,” said President Will Dudley. “For over four decades, he inspired students with his love of philosophy and of international study. His dedication to students and the profession called him to continue teaching well after his official retirement, here at Washington and Lee and at other institutions. Professor Pemberton exemplified the best of what we seek in our teacher-scholars. We shall miss him.”

He attended Georgia Tech for one year, in 1943, before serving in the Army during World War II in New Guinea, the Philippines and the occupation forces of Japan.

At W&L, he taught courses in the history of philosophy, Plato and existentialism, and a popular seminar on Martin Heidegger’s book “Being and Time.” His wartime travels in Asia kindled an interest in Eastern thought as well. Even after his retirement, he taught occasional classes at W&L and at VMI.

His other W&L service included a variety of committees, including one dealing with the library, and one that planned an interdisciplinary program in cognitive studies.

Pemberton established the Harrison J. Pemberton Fund for International Study at W&L, saying, “When you travel abroad, you have to adjust to another culture. You learn so much about other countries and their cultures, and you often find out just how strong you are. It is an incredible learning experience for our students and one I have supported throughout my career.”

In 2015, a former student of Pemberton’s, Tony Walker ’64, donated a painting to the university, by artist David Brewster, in Pemberton’s honor.

Among Pemberton’s research interests were Plato and phenomenology. He wrote an acclaimed book, “Plato’s Parmenides: The Critical Moment for Socrates” (1984), with several W&L undergraduates helping him with research; he wrote it while living in Greece, in a stone cottage overlooking the ocean.

Another book, “The Buddha Meets Socrates: A Philosophical Journal” (2008), detailed the five weeks in 2004 that Pemberton spent teaching Western philosophy to young Buddhist monks at the Shri Diwakar Vihara Buddhist Research and Educational Institute in Kalimpong, India. He accepted the post immediately after his retirement from W&L at the suggestion of Shamar Rinpoche, the second-highest-ranking lama of the Karma Kagyu school of Tibetan Buddhism. Pemberton also tutored privately one of the students, His Holiness the Karmapa, the head of the Karma Kagyu school.

“It was the camaraderie and really, happiness, that they showed and the way in which they lived their lives that impressed me most,” he told W&L in 2008. “They don’t have material possessions, but they don’t miss them. There is evidence that the Buddhist way yields more happiness than you might expect. I would go so far as to say Buddhists tend to be happier than Westerners. They don’t have any of our tension and strain. They also have a great sense of humor, and yet then they can be very serious. So they have the full range, and to me it seems more wholesome.”

Pemberton is survived by his nephews, Zan and Pem Guerry, and his niece, Chappell Kane.