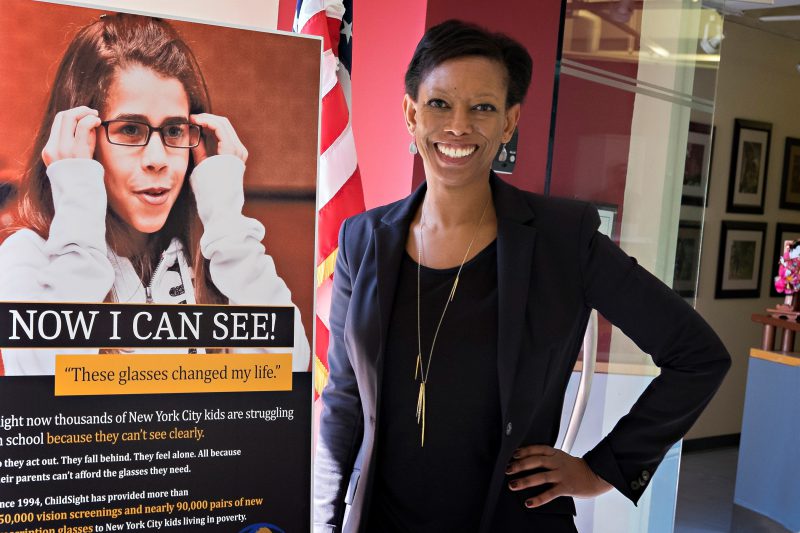 The title on the business cards that Heather Mangrum ’92 distributes reads “Director of Communications,” but she much prefers the title “Chief Storyteller.”

Helen Keller International, where Mangrum has worked since 2013, is an international non-governmental organization that’s based in New York City and works in 22 countries, including the United States. Founded by Helen Keller, the organization’s mission is to save the sight and lives of the world’s most vulnerable and disadvantaged people through programs that combat blindness, disease and malnutrition.

Mangrum travels to Asia and Africa each year, spending two to three weeks at a time in the field, gathering stories that the non-profit can use in its communications. To celebrate Helen Keller International’s 100th anniversary, Mangrum is on a mission to collect 100 stories about people who have benefitted from the organization’s support.

In the United States, that support comes in the form of free vision screenings and glasses to children living in high-poverty communities. In Asia and Africa, Helen Keller International conducts cataract surgery, treats diabetes-related vision loss, and works to improve education access for children with blindness and vision impairment. Their efforts to treat neglected tropical diseases and fortify food supplies with vitamins and minerals go even further towards meeting the organization’s mission.

Mangrum was a journalism major at Washington and Lee. At the time, the Williams School offered a concentration in business administration and she grabbed the chance to combine the two subjects.

“My journalism background gave me the foundation on how to structure a story. I learned not just how to think like a journalist, but how to organize information that you want others to act on,” said Mangrum. “That’s a very valuable skill—whether you’re working in journalism, PR or marketing.”

In the Commerce School, Mangrum learned about accounting, marketing and advertising. She thinks that students who want to work in non-profits need some kind of background in business.

Mangrum’s first job out of college was working for a publishing house that published non-fiction, young adult books about famous Americans. The job was administrative, but Mangrum kept her eye on the role she really wanted—to work as a publicist.

“I knew they didn’t need a second publicist, but I wanted to build my book of writing samples and media placements, so I offered to use some of my time to help out,” said Mangrum. “The more you can do, the more valuable you become—not just to that organization, but to the marketplace.”

Mangrum went on to do publicity for the Alvin Ailey American Dance Theater and the 92nd Street Y. By the time she took a job at the Lincoln Center, she figured she’d begun to carve out a career for herself in the arts and entertainment industry.

But the Lincoln Center was different than any of the other arts organizations at which Mangrum had worked. She headed up communications for the Lincoln Center Institute, which focuses on K-12 arts education as well as the professional development of artists and classroom teachers. Unlike other arts jobs, this one wasn’t just about promoting the next big show and selling tickets. Mangrum found herself immersed in advocacy work and loved it.

“I began to consider whether people had access to quality education and enrichment programs and how that access was related to the neighborhoods in which they were born and their outcomes later in life,” said Mangrum.

While many of Mangrum’s jobs had been in the non-profit sector, it took the experience at the Lincoln Center to help her see that she’d found her calling.

“I gravitated to [the non-profit industry] naturally,” said Mangrum. “I enjoy being a part of something. I can feel my impact on the work.”

At Helen Keller International, Mangrum is definitely getting the opportunity to make an impact. The organization has been around for a century, but many people have never heard of it. People know Helen Keller’s story, but they don’t know that there are school children living in New York City today who can’t see the board, or that malnutrition and preventable diseases are leading causes of blindness in impoverished communities around the world.

To combat that, Mangrum is still doing the thing she learned two decades ago at Washington and Lee. She’s telling stories.