Always on the Run Helen MacDermott, office manager for the Center for Global Learning, is an avid runner and mother of two who would rather have coffee with her mom than any celebrity on earth.

“I love air-popped popcorn, leafy sea dragons and running in the rain. I despise blue ball point pens, overripe fruit and making more than one trip to haul groceries into the house.”

What is your official job title?

How long have you worked at W&L?

I’ve had the distinct pleasure of working here since April 2014. I was part-time with Academic Technologies (ITS) and now I’m tickled pink to be the den mother for the — arguably — most innovative and visually pleasing facility on campus. 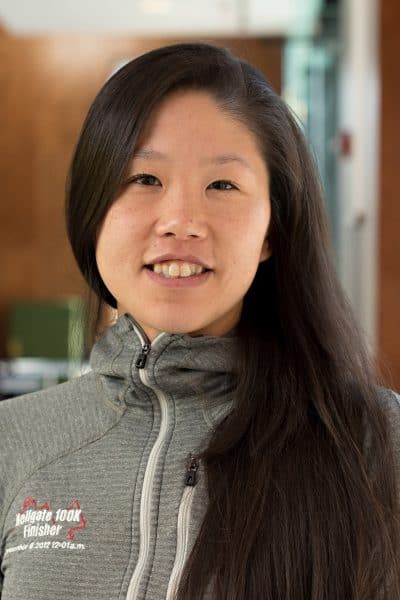 What do you like best about working at W&L?

Like a small business, a smaller school like Washington and Lee has less hierarchy, which means you can actually work with (and not just for) your boss. This has opened the door to wonderful mentoring and opportunities for collaboration.

What advice do you have for students (or parents)?

Do NOT get too caught up in your romantic life. There’s waaaaay more to college than dating. Instead, take advantage of this time to become the most amazing version of yourself possible. Think of college as an incubation period, a place to develop your skills and character. You are NEVER going to have as many resources, like-minded peers, free time and opportunities as you do now, so use them wisely.

In that same vein, build yourself, not your resume. Don’t do extracurriculars to impress future employers. Focus on developing yourself as a strong, well-rounded person, and you’ll be far more memorable in interviews and in the working world.

Where did you grow up?

Bridgewater, New Jersey. And for the record, I just want to say that I suffer from the triple whammy of being female, Asian, and from the Garden State — but dammit, I can drive.

Tell us a little bit more about yourself.

I’m 38. Scorpio. My husband, Raymond, teaches economics and marketing at VMI, and we have two daughters, Aine (12) and Aoife (20 months).  I *love* air-popped popcorn, leafy sea dragons and running in the rain. I *despise* blue ball point pens, overripe fruit and making more than one trip to haul groceries into the house.

If you could live anywhere, where would you build your dream home?

I’m quite happy here in Rockbridge County, actually, but I suppose a summer home at the beach would be nice.

Who most inspires you?

My buddy, Tom Green. Tom is a 65-year-old carpenter and the most soft-spoken and humble ultrarunner I know. He’s run 300+ ultras and happens to be the first runner to have ever completed The Grand Slam of Ultrarunning, four 100-mile races in one calendar year. Tom was gravely injured and nearly died in a freak accident last year. After two weeks in shock trauma and another five weeks in a rehab hospital, he finally returned home. Since then, he’s made an amazing comeback and is running (and racing!) again. He’s the epitome of pure determination, grit and keeping the faith.

What book are you reading now?

“Make Something Up: Stories You Can’t Unread” by Chuck Palahniuk

What music are you listening to these days?

Errr, the same music I was listening to in college: reggae.

What is your favorite movie of all time?

What is a website and/or blog you visit often?

Which historical figure do you most identify with?

Pretty sure average folks don’t become well-known historical figures, so I can’t say I know any with whom I can identify!

If you could have coffee with one person (living or deceased) who would it be and why?

I don’t have a cool answer, sorry. My mum. My folks live outside of Houston so I don’t see them often and I miss them terribly!

Tell me something most people don’t know about you?

I was cast as a contestant on the first season of “The Mole,” one of the first reality shows on ABC 15 YEARS AGO. The audition consisted of a three-minute monologue in which we were told to insert a significant lie about ourselves. I blathered on about being a college student (true), paying my way through college (also true) … by stripping (not true). Apparently, they loved it and I was flown to L.A. for another round of interviews and tests. We were about to begin filming when my grandmother, who helped raised me, passed away. Much to the annoyance of the directors, I refused to miss her funeral, so they cast someone else. I never did actually watch the show!

If you would like to nominate a co-worker for a Colleague Connections profile, please email Kevin Remington at kremington@wlu.edu.