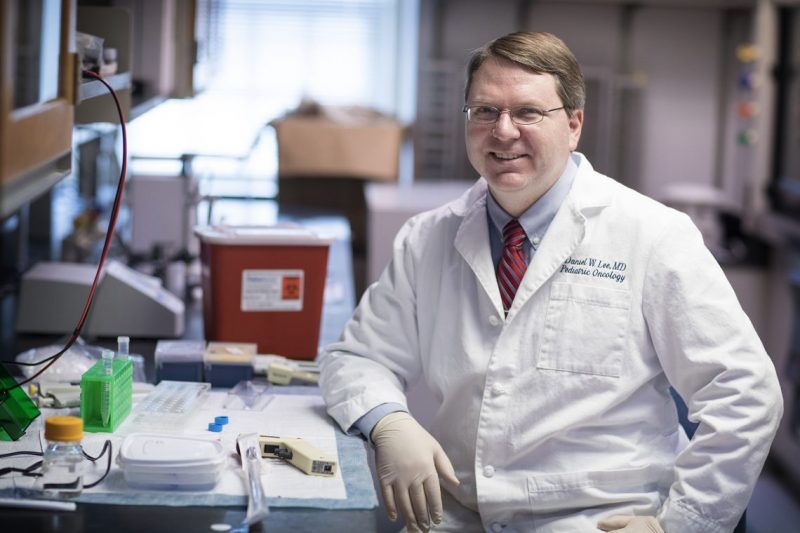 During medical school at the University of Texas at Houston, Dr. Daniel “Trey” Lee ’98 attended a camp for children with cancer. To his surprise, the children were happy and confident about their futures.

The experience led to two life-changing decisions for Lee: He married the young woman who had urged him to see the camp firsthand, and he decided to focus his career on pediatric oncology.

“Kids bounce back; it was an optimistic environment,” he said.

Now assistant professor of pediatrics and director of the Pediatric Hematopoietic Stem Cell Transplant Program at the University of Virginia, Lee is a leading researcher in the area of immunotherapy, a new way of treating childhood leukemia and other cancers. The Clinical Research Forum, an advocacy group for clinical research, has recognized his lab’s groundbreaking work as one of the top-10 clinical research achievements of 2017.

He helped pioneer the research during a clinical fellowship at the National Cancer Institute, under a program supported by NCI and Johns Hopkins University. The process, which takes T cells from the blood of children with relapsed or refractory leukemia, grows and genetically modifies them with a cancer-targeting receptor (CAR) in a lab, and infuses them back into the patient, has been extremely successful in clinical trials.

T cells are part of the body’s natural defense system against disease, but most cancers are able to evade them. Immunotherapy with CAR T cells allows the T cells to find and destroy the cancer cells.

At NCI, Lee spent the first year seeing patients at both Johns Hopkins and NCI. During the second year, he joined the lab of Dr. Crystal Mackall, former chief of the center’s Pediatric Oncology Branch, to start one of the first such immunotherapy clinical trials for children in the world. He treated the second patient in the world with the technique.

The trials treated children who had relapsed after standard — sometimes multiple —chemotherapy, bone marrow transplant and radiation treatments and who had no other options.

He noted that the two-year survival rate for the children with leukemia in his study using standard therapies is 10 percent. Under the immunotherapy trials, the two-year cancer-free survival rate is 60 to 70 percent. “We are shifting the treatment paradigm, and it is the impact on the patients that drives me.”

Before leaving NCI to join U.Va in 2016, Lee had treated 52 children and young adults. Since then, several drug companies have licensed the technology to get FDA approval, and his lab at U.Va is participating in that registration trial. Children with refractory leukemia are being treated with CAR T cell therapy for the first time in Virginia at U.Va.

The research has led to clinical trials for adult patients with lymphoma using a similar product. Lee said that cost will be an issue, since one infusion (all that is needed) costs between $375,000 and $450,000. Patients in clinical trials pay nothing, and U.Va researchers are working toward manufacturing their own product that would bring the cost of the treatment down to $20,000.

Lee also is leading a multi-center trial – GD2 BAT – which shows promise for treating neuroblastoma, another type of childhood cancer. In this trial, T cells collected from a patient are multiplied and coated with two linked antibodies. When returned to the patient, the cells create a “bridge” that allows the modified cells to kill the cancer cells.

As director of the pediatric hematopoietic stem cell transplant program, Lee is developing a staff and resources so the university can provide the transplants, starting in about six months. The cells for the transplants will come from bone marrow or other sources, including a patient’s sibling or parent, a public registry of potential donors or umbilical-cord stem cells.

At W&L, Lee majored in chemistry, with significant work in natural sciences and math. Erich Uffelman, Bentley Professor of Chemistry, “gave me my first shot at research as a freshman,” he said. “That opportunity is rarely available to first-year students at most colleges. He lit the fire in me,” Lee added. “He exudes enthusiasm. It was contagious and made me excited about chemistry.”

Also in the chemistry department, Professors Lisa Alty and Marcia France provided encouragement. Outside the lab, he credits the “well-rounded approach and development of critical thinking skills” at W&L that helped him in his career. Even in the sciences, he learned to approach problems from different aspects and more creatively. It was important to get that practice of putting thoughts into sentence and paragraph form, he said.

After receiving his medical degree, Lee spent two years in a post-doctoral position at M.D. Anderson Cancer Clinic in Houston, where he worked in a cell-signaling lab and cemented his decision to pursue research as his career.

Lee’s wife Karra – the person who encouraged him to attend the camp where his passion for pediatric oncology first developed – works at U.Va, as a physician assistant in the university’s cancer center for adults with gastroenterology cancers. They have a son, Andrew, who is 5.

Lee continues to be passionate about his research, which takes up about 65 percent of his time on the job, along with teaching, administrative work and the clinical trials. “There is potential for new research with the CAR T therapy. It is truly paradigm-changing. We’re just scratching the surface,” he said. “It is a new field that is blossoming with new discoveries.”