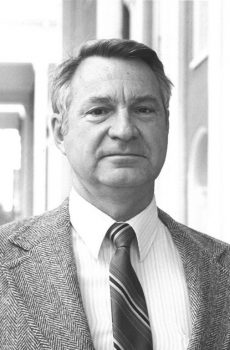 “I know from my colleagues that Professor Sharp’s breadth of expertise and his commitment to his students was impressive, teaching courses from Calculus I to Cantor’s Theory on Transfinite Numbers and directing a number of honors theses and directed-study projects,” said President Will Dudley. “In addition, his service on the President’s Advisory Committee, the Library Committee and the Fringe Benefits Committee helped improve the W&L community in tangible ways. We are grateful to Professor Sharp for his commitment to his students and to the life of the university. Our thoughts are with his family in this time of loss.”

A native of Nashville, Tennessee, Sharp received his B.A. in civil engineering from Vanderbilt University and his M.A. and Ph.D. from Duke University. He served in the Army Corps of Engineers during World War II in the Pacific Theater.

Before joining the W&L faculty as head of the Mathematics Department in 1983, he taught at Georgia Institute of Technology and Emory University. Sharp retired from W&L in 1991.

“When Hank Sharp came to W&L, the Mathematics Department was trying to decide its direction with strongly held, but opposing views,” said Wayne Dymacek, Cincinnati Professor of Mathematics. “He not only healed the divisions, but set the department on a successful course which has lasted until the present. Without him, the department would not have the faculty, nor the number of majors we currently enjoy.”

After retirement, Sharp volunteered as a mentor/tutor in the Lexington and Rockbridge County public schools, where he earned the esteem of many young students, parents and teachers. He joined the board for the Kendal at Lexington Retirement Community, and he and his wife were among the earliest residents there. He continued his lifelong interest in education by offering a number of short courses in mathematics for fellow Kendal residents.

He is survived by his son, Henry Kerr Sharp, and daughter, Margaret Lewis Sharp.