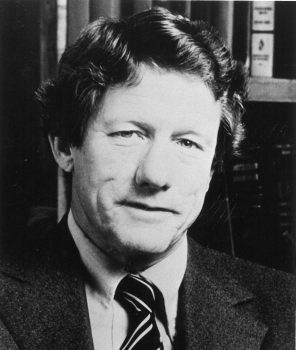 Born Feb. 15, 1927, in San Angelo, he attended Texas Country Day (now St. Marks) in Dallas. He entered New Mexico Military Academy before joining the Navy in January 1945. After his discharge, he attended W&L, where he belonged to Sigma Alpha Epsilon fraternity.

After graduating from Washington and Lee, Harte worked on daily newspapers in Texas and Iowa before becoming president of the San Angelo Standard Times in 1956. In 1962, he moved to San Antonio when Harte-Hanks purchased the San Antonio Express and News and KENS-TV. He served as vice president and later president of Express Publishing Co. before assuming the position of chairman of the board in 1971. He retired in 2013.

“I had the fortune of visiting and spending time with Houston in San Antonio more than a dozen times since I arrived at W&L,” said Dennis Cross, vice president of University Advancement. “I always looked forward to those conversations. Houston was keenly interested in campus news and initiatives and the priorities of the president and the Trustees he wanted to support. Houston always exhibited his sharp and penetrating mind, his warm welcome, quick wit and smile, and gleam in his eyes. As his health declined over the years. Houston never hesitated to make himself available to talk about W&L. He loved Washington and Lee. He is a giant on whose shoulder W&L will stand for a long time.”

Over the years, Harte and his wife, Carolyn, provided a number of substantial gifts to the university, including the last campaign, Honor Our Past, Build Our Future. During the On the Shoulders of Giants campaign, he made a $2 million gift and, later in that campaign, with H.E. “Gerry” Lenfest ’53, made a $5 million challenge grant toward its completion. Harte’s support included the Annual Fund, the Science Center, Wilson Hall, theater, and the Class of 1950 Gilliam Scholarship. Harte was a member of the Doremus Society, recognizing those who include W&L in their estate plan. In recognition of his generosity and service to W&L, Harte received the Distinguished Alumnus Award in 1980.

Harte was active on a number of community boards, including the Chamber of Commerce and the Cancer Therapy and Research Center. He was also involved with the Mission Road Developmental Center.

He served on several college boards, including W&L (1981 to 1992), East Texas State University and Stillman College. President Lyndon Johnson appointed him to the board of visitors of the Air Force Academy in 1966.

He is survived by his wife of 69 years, Carolyn; two sons, Houston Ritchie and David Harriman; a daughter, Sarah Elizabeth; seven grandchildren and four great-grandchildren.