How to Dream Big Zander Tallman ’14 and Paige Gance ’13 own and operate Just Games in Lexington. 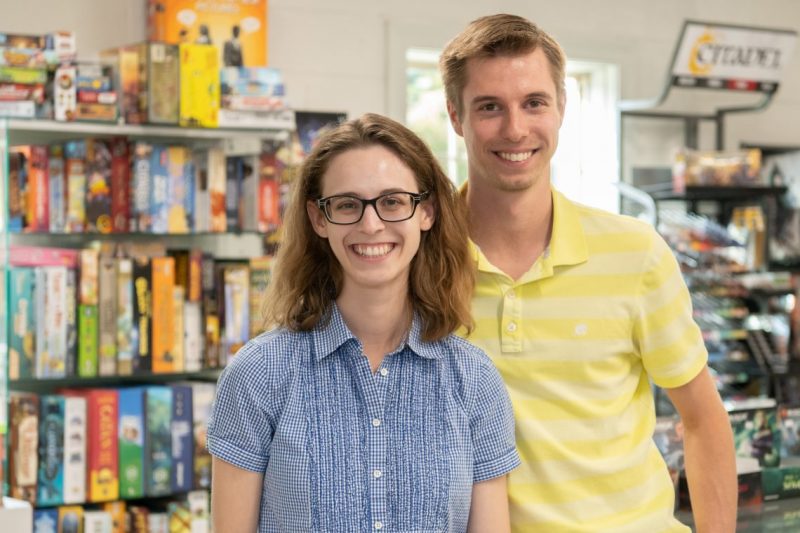 Zander Tallman ’14 thought the text message was a joke.

It was just after Thanksgiving 2017. Tallman and his wife, Paige Gance ’13, were living in the D.C. area, where he was a financial services auditor for E&Y, and she was finishing a master’s in applied economics.

The text from Aaron Jeong ’15 announced Launch Lex, a competition for entrepreneurs to create or expand businesses in downtown Lexington.

Tallman gave E&Y his six-weeks notice the next day. They packed up, moved to Lexington, where they’d been married in Lee Chapel in 2016, and began planning a store for specialty board games.

Growing up, Gance and Tallman played board games with their families. But it wasn’t until grad school — she at Maryland; he at Wake Forest — that they developed a shared passion for the new generation of games that have transcended Monopoly and Clue.

“One of my classmates at Wake Forest introduced me to Magic: The Gathering, and down that rabbit hole I went,” said Tallman. “I started playing Magic at a game store in Winston-Salem. I had never been anywhere where dozens of people met up multiple nights a week to play games. I’d always dreamed of owning my own store and realized this was the store I wanted.”

Meanwhile, in College Park, Maryland, Gance had discovered The Board and Brew, a game café. “You pay $5 to play as many games as you want from a huge collection,” said Gance, now a prospect research analyst at W&L. “They serve comfort food and coffee and beer. My housemates and I went there a lot.”

In April 2018, Tallman delivered a three-minute pitch to the Launch Lex judges. Just Games Lexington won a $10,000 grant and opened in September 2018.

In addition to sales, the store hosts gaming events five days a week. Players gather for Magic or Dungeons and Dragons or other board games. The response has been a pleasant surprise, with about 60 regular Magic players who range in age from 12 to 55. Dungeons and Dragons sessions are smaller, with a slightly older demographic.

“Parents and grandparents are buying games for their kids and grandkids in the hopes that they will want to get off their computer screens on their own,” said Tallman. “And it works because these games are much more fun.”