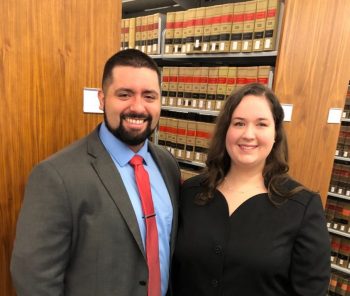 After nearly twenty years of suffering domestic abuse in El Salvador, a client of the Immigrant Rights Clinic at Washington and Lee University School of Law was finally granted asylum at the end of 2019. The client, whose name is being withheld for privacy reasons, was represented by 3Ls Andrew Salinas and Isabella Gray.

Salinas and Gray took on the case for the Immigrant Rights Clinic in August 2018 as 2Ls and faced an uphill battle for relief. Former Attorney General Jeff Sessions recently had issued a ruling that specifically restricted the possibility of domestic violence victims qualifying for asylum. That ruling rendered obsolete the case brief they had inherited from previous student attorneys. Another difficulty in the case came from the client herself, who suffered from PTSD and memory loss. Salinas and Gray worried about how well she would do testifying in front of an immigration judge at her individual hearing.

To qualify for asylum, the client needed to prove that she suffered harm amounting to persecution for belonging to a Particular Social Group (PSG). PSG is among the most difficult grounds for asylum to prove. The client also had to show that the Salvadoran government was unable or unwilling to protect her and that she had a well-founded fear of persecution if she returned to El Salvador.

Their client experienced unimaginable sexual, physical, and mental abuse for twenty years from her former male partner, making proving persecution easier, Salinas said. But where the real issue lay was with articulating a PSG after the Attorney Generals’ decision all but ruled out domestic violence victims as a cognizable PSGs, Gray explained.

After a month of back and forth with each other and Clinical Professor David Baluarte, Salinas and Gray had formulated a new legal theory.

“During the years of abuse that our client suffered, oftentimes her partner would come home drunk, and be mad that she didn’t do the dishes or make the food and he would say ‘You’re my property, you’re my woman, you need to be doing this,’” Salinas explained. “And every time she would say, ‘No, I’m my own person, I’m not your property, and he would abuse her to let her know—well, ‘Yes you are.’”

According to Salinas, El Salvador consistently tops the list for having the highest rates of femicide in the world. “Maybe she’s not reading third-wave feminist literature, right?” Salinas said. “But for her to stand up and affirm her basic dignity as a human being to a man like her partner who basically embodies machismo, we thought that this could be considered overtly feminist. A lot of the behavior of her abuser—even when she left him—was based on this premise that he really deep down believed her to be his property.” Salinas and Gray therefore based their legal theory on the fact that she was being persecuted because of her feminist political opinion.

Another wrinkle in their case was proving that the Salvadoran government was unable or unwilling to offer their client protection due to the fact that the police had responded periodically to the client’s 9-11 calls. “Even though they were showing up hours later after her partner would break into her home and harass and abuse her—they were still showing up,” Gray said. “At one point they arrested her abuser and put him in prison, so we thought the judge was going to say, ‘Well, we can point to a few times that the government did something, maybe that’s enough.’”

Beyond the legal theories, in order to be granted asylum, the client would have to recount her horrific experiences in excruciating detail by testifying in front of an immigration judge. To prepare, she had to practice testifying with Salinas and Gray about her suffering over and over again. She would ask that her two daughters not be in the room because she didn’t want them to hear about what had happened to her.

“It was very mentally draining for her to do this week after week,” Salinas said, and the preparation took its toll. The week before the hearing their client began experiencing panic attacks, which affected her memory recall.

Gray stayed up the night before the trial and found a medical study that would support that PTSD related memory loss is exacerbated when stress is involved. She presented it to the judge the day of the individual hearing in late November 2018 and asked that her team be able to refer to the client’s written account if she should have any trouble remembering. The judge agreed to this, as did the opposing lawyers.

“They thought this was a slam-dunk case for the government,” Salinas explained, “I was confident they were just planning on pointing to AG Sessions’ decision and say, ‘Sorry lady, you lose.’”

To Salinas and Gray’s surprise, the client ended up recounting her experiences perfectly while Salinas performed the direct examination, and government’s cross-examination was minimal.

While the judge readily accepted that their client was persecuted as part of a PSG, she was not convinced that the Salvadoran government had been “unable and unwilling” to protect their client. Salinas and Gray were asked to submit an additional brief that addressed what that requirement meant.

“So that was our Christmas break,” Gray said. They submitted the second brief in January 2019, arguing that, even if the Salvadoran government may have seemed willing to help, their help was not effective in the end.

“We had to go back to the legislative notes in the original 1954 United Nations Convention Relating to the Status of Refugees and the follow up 1967 Protocol searching for the original understanding of ‘unable or unwilling,’” Salinas said. Pulling from international sources and U.S. immigration case law, Salinas and Gray formulated a new legal theory for the immigration court. “We argued that ‘unable or unwilling’ meant that a government needed to provide effective protection. In order for the protection to be ‘effective’ it must prevent the applicant from having a well-founded fear of future persecution,” Gray said. “And the Salvadoran government was not doing that.”

After a year of waiting, their client finally received a decision in December 2019. The result was just as surprising as the case was difficult: the case had been unexpectedly kicked up to the Deputy Chief Immigration Officer for the United States, who accepted Salinas and Gray’s creative arguments that their client was being persecuted on the basis of political opinion and that the Salvadoran government had failed to provide her effective protection. Additionally, the Deputy Chief Immigration Officer described Salinas and Gray as “highly competent and responsible counsel” in his decision.

“That decision in itself is mind-blowing,” Gray said.

To Salinas and Gray’s surprise, in addition to their client being granted regular asylum, she was also granted humanitarian asylum – a type of relief that is usually reserved for people who suffered physical disfigurement as a result of their persecution. Grants of humanitarian asylum are so rare that the students did not even request that form of relief in their briefing. However, the Deputy Chief Immigration Officer found that Salinas and Gray had made such a strong case for their client’s psychological scars, that he extended this principle to guarantee the client’s protection.

Now, the client will be able to remain in the U.S. with her two young teenage daughters. Eventually, she can apply to become a citizen, and after becoming a citizen, she can reunite her family by sending for her son, who is still in El Salvador.

As for Salinas and Gray, both have secured employment after graduating law school. Salinas will go on to become an Assistant District Attorney at the Kings County District Attorney’s Office in Brooklyn, NY and Gray will serve as a Clerk in the Complex Commercial Litigation Division of Delaware’s Superior Court in Wilmington, DE.