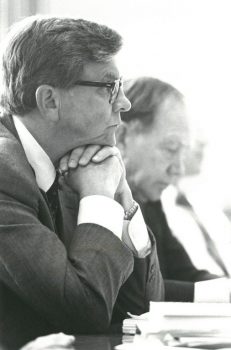 A native of Washington, D.C., Steuart attended St. Albans School and received his bachelor’s degree in commerce from W&L in 1953. After graduation, he served for three years as an officer in the U.S. Coast Guard. He joined the family’s real estate and development business and rose to become president of the Steuart Investment Co. He was also chairman of Steuart Transportation Co. and a director of Allied Capital Corp. and American Security Corp.

Steuart served on W&L’s Board of Trustees from 1983 to 1993. He chaired the Investment, Planning and Development, Nominating, Capital Projects and Executive committees. He served the university in other important volunteer roles, including chair of the R.E. Lee Associates giving society and as co-chair of his 50th reunion class committee. He was on the National Steering Committee and chair of the Leadership Gifts Committee for the On the Shoulders of Giants capital campaign.

Steuart and his beloved wife, Margaret “Peggy” Steuart, a university trustee from 1996-2005, supported W&L generously through numerous gifts, including the Annual Fund, Mock Convention, the Colonnade Restoration and Renovation, the Vernon W. Holleman Jr. ’58 Scholarship, the Wilson Field renovation, Wilson Hall, the Reeves Center, the Theater Department, and multiple capital campaigns. The Steuarts are on Benefactors’ Wall in Washington Hall.

Steuart lived in Chevy Chase, Maryland, and served his community as president of the Kenwood Citizens Association and as a trustee of Sibley Hospital, the National Cathedral School and Norwood School. He was a member of the Kiwanis Club of Washington.

He is survived by Peggy and their children, Elizabeth Ann, Guy Thomas ’80, Bradley Curtis ’86, Carter Morgan ’88 and Hugh Thatcher ’88. Granddaughter Langley Steuart, daughter of Carter ’88 and Katherine ’89, is a member of the Class of 2024.