In Memoriam: Joseph Ramsey Martin Jr. The professor of philosophy emeritus taught at W&L from 1968 to 1996. 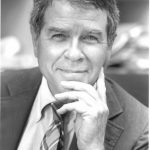 Martin was born on Oct. 15, 1930, and graduated from the University of Virginia in 1952. He served in the Navy as an aviator aboard the aircraft carrier USS Coral Sea, continuing his service as a flight instructor in Pensacola, Florida. Subsequent to active duty, Martin returned to U.Va., where he earned an M.A. in English. He joined the faculty at Brooks School in North Andover, Massachusetts, in 1960.

Martin then joined U.Va. as both assistant dean of admissions and an English professor, and while there earned his Ph.D. in philosophy in 1967. After a year teaching at Transylvania College, Martin joined the faculty at W&L in 1968, retiring in 1996.

The late Harry Pemberton, professor of philosophy, honored Martin at his retirement as a “congenial chairman of the motley bunch known officially as the Philosophy Department.” Martin, he said, “is a man of a memorable personality” who “stirred the students’ minds into philosophical activity.”

Known for his vibrant smile, sense of humor and sharp intellect, Martin enjoyed stimulating conversation and was an enthusiastic debater. One of his greatest joys was aviation; he especially loved flying his friends and family in his planes. Pemberton recalled flying back from Oberlin in thick fog and marveling at Martin’s precise landing on the runway at Weyers Cave.

Martin’s family noted that “he found much delight in his years at W&L, not only in challenging young minds with course content in philosophy, logic and ethics, but also in spending time with his advisees off campus. These students had great fun camping, canoeing and enjoying home-cooked meals with the family.” Many remained lifelong friends.

He is survived by his wife, Joan, and his children, Mary Case “Cary” Martin and Joseph Ramsey “Jody” Martin Ill.

Burial is private, and there will be no church service. Details for a Celebration of Life reception will be announced at a later date. In lieu of flowers, memorial donations are suggested for the Joseph Ramsey Martin Jr. Scholarship Endowment Fund at Washington and Lee University, 204 W. Washington Street, Lexington, VA 24450, Planned Parenthood or any animal rescue charity. Condolences, especially memories, may be sent to the family at www.Teaguefuneralhome.com.