In Memoriam: Richard L. Duchossois ’44 The founder and chairman emeritus of The Duchossois Group, horse racing icon and generous benefactor of W&L was 100. 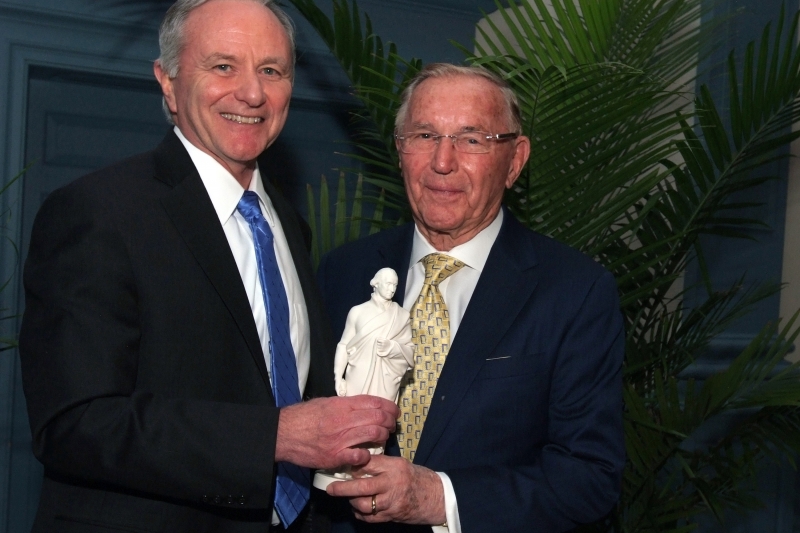 “I can only say how proud I am to have some small affiliation with Washington and Lee, which I feel is one of the finest educational institutions in the country.”

Richard Louis Duchossois ’44, founder and chairman emeritus of The Duchossois Group, horse racing icon and generous benefactor of Washington and Lee University, died Jan. 28, 2022. He was 100.

“Dick was a decorated veteran and accomplished businessman whose extraordinary service to his country and personal achievement set a standard to which we should all aspire,” said President Will Dudley. “His leadership, humility, dedication and generosity are an inspiration to all those who knew him. Through his magnificent gifts to the university, he helped build athletic facilities that enrich our entire community, and where our student-athletes flourish. I am grateful to have known him, and I extend my sincere condolences to his wife Judi and his family.”

At the 1995 ceremony where his name was added to W&L’s Benefactors Wall, Duchossois said: “I can only say how proud I am to have some small affiliation with Washington and Lee, which I feel is one of the finest educational institutions in the country.”

Duchossois graduated from Morgan Park Military Academy and attended W&L before starting active military service during World War II. He fought in the European Theatre and was assigned to the 610th Tank Destroyer Battalion under Gen. George Patton, where he served in five European campaigns and attained the rank of major. He received a Purple Heart and two Bronze Stars.

Following his military career, Duchossois built a thriving career in business, turning Thrall Car Manufacturing into the second-largest builder of rail freight cars. His business dealings led to the formation of The Duchossois Group, an organization with holdings primarily in the manufacturing and investment sectors.

In the 1960s, Duchossois developed an affinity for horse racing and went on to become a significant figure in the sport. By the late 1970s, he helped form the Illinois Thoroughbred Breeders and Owners Association, and in 1983, he purchased an ownership stake in the Arlington Park racetrack. He later bought stake in Churchill Downs, bringing Arlington under the famed track’s auspices. Duchossois served on the Churchill Downs board of directors until retiring in 2019 at the age of 97.

Duchossois was a generous supporter of W&L, providing the funds to build the Duchossois Tennis Center in 1997. He also funded the renovations of Wilson Field in 2008 and the former Warner Center and Doremus Gymnasium in 2020, now called The Richard L. Duchossois Athletic and Recreation Center. His other philanthropic gifts to W&L include support of the Annual Fund and the Tyler R. and Danielle G. Lenczuk Scholarship, a wedding gift to his grandson Tyler ’08.

At the 2008 Wilson Field rededication ceremony, Duchossois noted: “When you look at W&L, you get the finest academic education. When you go west of the footbridge [to the outdoor athletic complex], you put that education into action by learning how to work with each other through teamwork. These two components — academic and the athletic — are tied together by the finest honor system in the world so that everything is done in an ethical way.”

Duchossois received an honorary Doctor of Laws degree from Washington and Lee in 1991. In 2015, his alma mater bestowed upon him the Washington Award, its highest honor, which recognizes distinguished leadership and service to the nation and/or extraordinary acts of philanthropy in support of W&L and other institutions. In 2020, he was inducted into W&L’s Athletics Hall of Fame (watch the video).

Among his many awards include the 1986 American Jockey Club’s Gold Medal, the 1988 Special Sovereign Award from the Jockey Club of Canada, the Lord Derby Award from the Horserace Writers and Reporters Association of Great Britain, the Joe Palmer Award for Meritorious Service to Racing from the National Turf Writers Association and the 2003 Eclipse Award of Merit. Duchossois was inducted into the Chicagoland Sports Hall of Fame and the National Museum of Racing and Hall of Fame as one of its esteemed Pillars of the Turf. He also received France’s highest decoration, the Légion d’honneur. Duchossois also has been distinguished with a graduate degree from Loyola University of Chicago.

Duchossois is survived by his wife, Mary Judith; son Craig; daughters Dayle and Kimberly P’08, who served on W&L’s Board of Trustees and its Parents Council; stepsons Steve Marchi and Paul Marchi; seven grandchildren; two step-grandchildren; and 14 great-grandchildren. He was preceded in death by his first wife, Beverly, and a son, Bruce.