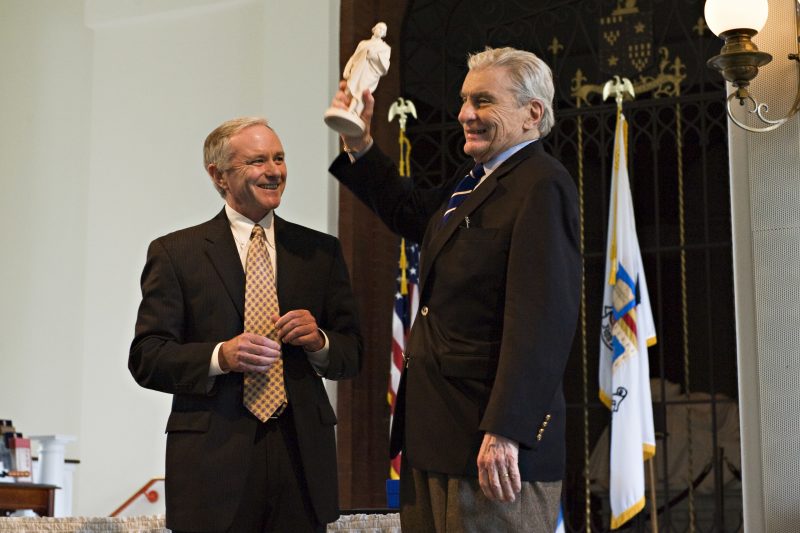 “Sen. Warner’s decades-long public service to his country and alma mater exemplifies the attributes of honor, integrity and civility that W&L strives to instill in its students,” said President Will Dudley. “We are grateful for his many contributions to Washington and Lee, the Commonwealth of Virginia, and our nation. On behalf of the entire W&L community I extend condolences to his family.”

Warner was born in Washington, D.C., on Feb. 18, 1927, the son of Dr. John W. Warner, who graduated from W&L in 1903. He served in the Navy from 1944-46 during World War II and attended W&L on the GI Bill. He played lacrosse, joined Beta Theta Pi fraternity and served as secretary-treasurer of his senior science class.

In an interview for the W&L Magazine in 2009, Warner said: “I was like the rest of the veterans that came back from WWII. Believe me, we buckled down and worked hard to establish our academic credentials and get through school. Washington and Lee was like coming home. It was a wonderful school. They wrapped their arms around the returning veterans and did everything they could to help them get adjusted and get started in their academic life.”

Warner graduated with a B.S. in engineering and enrolled in the University of Virginia’s law school. He then joined the U.S. Marines and served in Korea from 1950-52 before completing his law studies at U.Va. in 1953. From 1953-56, Warner served as a law clerk for the late Chief Judge E. Barrett Prettyman of the U.S. Court of Appeals in Washington. He was appointed an assistant U.S. attorney in 1956 and served four years in the trial and appellate divisions before entering private practice in 1960.

In February 1969, Warner was appointed undersecretary of the Navy and, three years later, he succeeded John H. Chafee as secretary of the Navy. He participated in the Law of the Sea talks and negotiated the Incidents at Sea Executive Agreement with the Soviet Union.

President Gerald Ford appointed Warner to coordinate the celebration of the bicentennial of the founding of the United States in 1976, and he directed the federal effort at events in all 50 states and in 22 foreign countries. 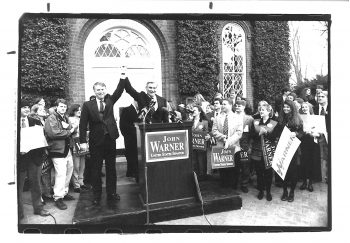 Sen. John Warner ’49 with some enthusiastic supporters in front of Lee Chapel.

Warner began his five terms in the U.S. Senate in 1978, stepping down in 2009, and was the second-longest-serving senator from Virginia. He formerly chaired the Armed Services Committee and served on the Intelligence Committee, on the Environment and Public Works and the Committee on Homeland Security and Government Affairs.

In August 2007, Warner announced his decision not to seek re-election to a sixth term. He said that the “communities of Charlottesville, Amherst and Lexington are, to me, hallowed grounds. My ancestors on my father’s side go back many generations in Amherst; Lexington is home to Washington and Lee University, where my father graduated in 1903 and [where] I, following Naval service, graduated in 1949; and then to Charlottesville where I entered the Law School.”

He has served his alma mater on the Board of Trustees from 1969-80, on the Commission on the 250th Observance, the 2008 Mock Convention Advisory Board and through his support of the Shepherd Poverty Program and the Shepherd Alliance. His philanthropic support includes the Annual Fund, The Joella and Stewart Morris House endowment, The Class of 1949 Memorial Scholarship Endowment, The E. Waller Dudley Scholarship, and the John W. Warner Public Service Award.

In 2005, the university awarded Warner an honorary degree and in 2009 bestowed upon him the Washington Award, its highest honor, which recognizes distinguished leadership and service to the nation and/or extraordinary acts of philanthropy in support of Washington and Lee and other institutions. At the ceremony, Warner, who was on campus for his 60th reunion, said, “This is a very deeply moving moment in my life.” He noted the influence of W&L’s student-run Honor System, saying, “That system has given me enormous strength throughout my public life.” His remarks brought the large audience to a standing ovation.