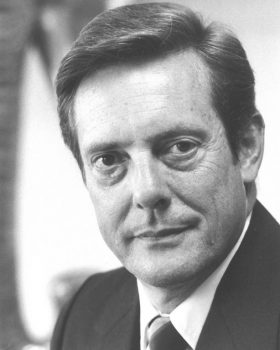 Born and raised in Chattanooga, Tennessee, Brock graduated from W&L with a B.S. in commerce. After two years in the Navy, he joined his family’s business, becoming vice president of the Brock Candy Company.

Brock served in the House of Representatives from 1962 to 1970 and was elected to the Senate in 1970. He became chair of the Republican National Committee in 1977 before joining President Ronald Reagan’s administration as a U.S. Trade Representative and U.S. Secretary of Labor.

After leaving government, Brock co-chaired the National Commission on the Skills of the American Workforce and chaired the Commission on Achieving Necessary Skills, both focused on education reform. He was also a senior counselor and member of the board of the Center for Strategic and International Studies, where he chaired the International Policy Roundtable.

From 1988 to 1991, Brock served as chairman of the National Endowment for Democracy, an organization he helped found in 1980. In 1994, he established and served as CEO for The Brock Offices, a consulting firm specializing in international trade and human resource development.

Brock joined W&L’s Board of Trustees in 1991, stepping down in 1993. His mother created the Brock Family Scholarship in 1986 in honor of Brock and his brother Pat ’54. Brock was a member of his 50th reunion committee and received the Distinguished Alumnus Award from W&L in 1974.

He is survived by his wife, Sandra; two brothers, Pat ’54 and Frank; six children and stepchildren, including Bill IV ’81; 17 grandchildren; and two great-grandchildren.