“I began to think of my HGTV internship as more of a lifestyle than a job.”

How did you learn about this internship?

I learned about my HGTV Magazine internship through W&L’s Career Development Center. I worked closely with the staff and we weeded through a number of internships until we found the Hearst Internship program that offered everything that I was looking for in a potential summer employment opportunity. I narrowed down my top Hearst magazine preferences and HGTV Magazine was one of the three.

What gave you the edge in landing this internship?

Networking and a well-crafted resume. Before applying to Hearst, I reached out to W&L alumni who work at Hearst, learned more about the company and took their advice on where to apply. Also having previous editorial experience on my resume gave me the confidence that I needed to apply for competitive positions at Hearst.

On Tuesdays, I worked in the home department with the Home Editorial Assistant. My tasks as a home intern varied weekly. Some of my tasks included researching products for the monthly “Curb Appeal” story, shipping back loaned products to companies, putting together furniture, helping on photo shoots and putting together product boards. Wednesdays through Fridays, I worked in the editorial department with one of the Senior Editors and the Senior Associate Editor. As an edit intern, I transcribed interviews from audio files to word documents, attended weekly production meetings, helped editors with story boards, sat in on editorial meetings where my editors presented their story to Sara, the editor-in-chief, and pitched my own ideas for monthly columns such as “How Bad is it,” “Talk to a Toolman,” and “What’s the Difference?”

I don’t think I would have had the incredible experience that I did this summer if it were not for the HGTV Magazine team. Though I only worked closely with about four employees, I felt as if I knew the entire floor. HGTV Magazine’s internship program had special weekly luncheons, called “Brown Bag Lunches,” where the interns would eat lunch with the different departments and learn about their job and how they came into their position. All of their staff was so unbelievably kind and welcoming, always inviting me to the birthday celebrations or saying hello to me when I passed them on the street. The team’s passion for the magazine certainly inspired my love for HGTV, whether it was finding a cheaper version of an expensive pillow or seeing our editor-in-chief on The Today Show. Their positive attitudes really played a role in my experience and undoubtedly were my favorite part of the internship on a daily basis.

How did you like living in the city where the internship was located?

I liked it! The HGTV Magazine office was on 57th and 8th Avenue, right next to Columbus Circle. My apartment was on 14th street, a block from the East River, so it took me a little over half an hour to get to work. There are always plenty of things to do in New York–whether it was finding a new bagel shop, walking the High Line or visiting breweries on Long Island–the opportunities to get out of the apartment were endless. I also have family in the city, so seeing them made me feel as if I wasn’t too far from home. I would say that my favorite part of living in the city this summer was being so close to the water. Every morning before work, my roommate and I would wake up around 6 a.m. and run along the East River. Our East River runs were definitely a great way to ease into the day before the maelstrom of city life set in.

Well for one, I can decorate a living room! Just kidding. One of my key takeaways from this summer was the importance of always thinking, even when I wasn’t on the job. One of the biggest differences between going to school and having a job is outside work. I used to think that school never ended: I would go to class but still have studying to do in the library later, whereas when I left the office at 6 o’clock, my work would be finished until the next day. However, this summer I found that people who kept brainstorming after that 6 o’clock hour were the ones who brought new ideas to the table. Over half of the HGTV Magazine team watches the HGTV channel when they go home at night. So, following their example, I began to think of my HGTV internship as more of a lifestyle than a job, and it worked! Some of my best column pitches from this summer were thought of when I was cooking dinner and some of my favorite products were spotted while window-shopping on Saturdays.

Take your job search in steps. First, visit the Career Development Office, then reach out to alumni, and finally, apply. You never know what will end up working out!

Will you pursue a career in this field after graduation?

Yes, one hundred percent. I love to write and I hope to be back working in the magazine industry with an editorial position next year. 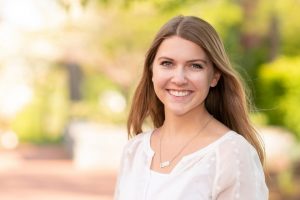