Into the Great Wide Open The A. Paul Knight Internship Program in Conservation, named in memory of a late Washington and Lee student, turns 30 this year. It has provided internships to 132 students and is still going strong. 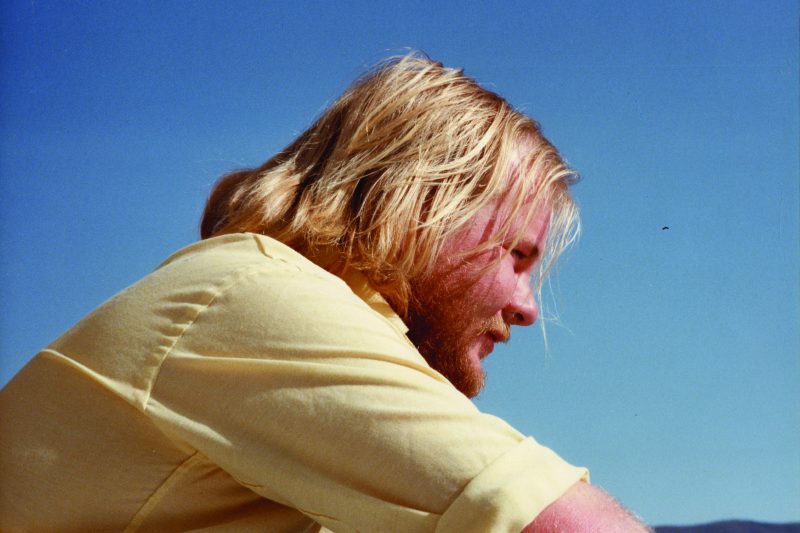 Paul Knight ’85, who inspired the internship program, was a great lover of the outdoors and fly-fishing. Photo courtesy of the Knight family.

“It’s better than I hoped it would be, and it’s had a bigger impact on students than I anticipated. Paul would be very enthusiastic about it — there is no question in my mind about that.”

Less than two weeks after Liz Todd ’19 returned to Washington and Lee from her 2016 summer internship with The Nature Conservancy in Idaho, she unequivocally declared her majors in geology and environmental studies. If it hadn’t been for that opportunity through the A. Paul Knight Internship Program, she might still be searching for her calling.

“As a freshman applying for the program, I never imagined it would have an impact of this scale on my academic path and my future aspirations,” said Todd, who has since worked in the Brazilian Amazon, and plans to return to Idaho this summer. “I have found myself in places I never thought I would be and going in directions I never would have anticipated.”

Al Knight ’51L delights in such stories, because he helped establish the Knight program as a tribute to his late son, Paul Knight ’85. In the past 30 years, 132 W&L undergraduate and law students have landed internships in environmental protection and conservation through the program, and many have gone on to work in those fields.

“It’s better than I hoped it would be, and it’s had a bigger impact on students than I anticipated,” Al Knight said. “Paul would be very enthusiastic about it — there is no question in my mind about that.”

Changing the Course of a Life

John McDaniel, professor emeritus of anthropology at W&L, first met Paul Knight during a lunch break on an archaeological dig. The men bonded over a mutual interest in fly-fishing, and during the summers of 1983, 1984 and 1985, Paul visited the McDaniel family at their summer home on the Henry’s Fork of the Snake River, in Idaho, one of the premier fly-fishing spots in the world. 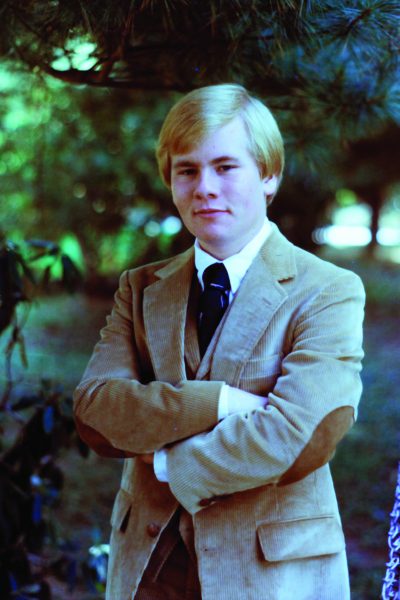 Then, in June 1985, Paul went missing during a backpacking trip at Yellowstone National Park. Two days later, rangers discovered that he had suffered a fatal fall. He was 22 years old.

In the months after his death, Paul’s parents could think only of what they had lost: a gregarious, free-spirited and passionate young man who loved the outdoors and family traditions. It was, as Al Knight wrote in a 1988 article in this magazine, “a struggle . . . to put more meaning into a life suddenly sapped of most of its significance.”

Together, the Knights and the McDaniels created the A. Paul Knight Internship Program at W&L. With generous contributions from Al Knight’s own funds, along with matches from his then employer, Merck and Co., and modest donations from others, the program placed its first intern in 1988. The number of internships has varied over the years, but the program now accommodates two law students and five undergraduates each summer.

Law students secure their own positions, then apply for a Knight stipend. They have worked for a diverse array of organizations, including the Natural Resources Defense Council, the Southern Environmental Law Center, the U.S. Department of Justice, and the U.S. Environmental Protection Agency. Some still work in environmental law, such as Mary Cromer ’06L, who represents coal miners and their families through the nonprofit Appalachian Citizens’ Law Center, in Kentucky.

“Without exception, they come back having learned a lot and having obtained a lot of practical experience,” said Brian Murchison, the Charles S. Rowe Professor of Law at W&L. “They also see firsthand that these are complex issues that need really dedicated and smart people working on them.”

Undergraduates work for one of three organizations located within close proximity in eastern Idaho: the Henry’s Fork Foundation (HFF), The Nature Conservancy’s Flat Ranch, or the Friends of Harriman State Park. Tasks include everything from mending fences and planting water lilies to conducting extensive projects. In 2017, for example, Sam Cochran ’18 created a comprehensive catalog of access points to the Henry’s Fork for the HFF.

Outside the day-to-day work, most interns develop an appreciation for the outdoors, especially in that rugged and beautiful territory. “Part of Al’s original intent was to give students the experience of being out West,” said Rob Van Kirk, senior scientist at HFF. “That has really been a successful component of the program. I think all of the interns I have met are quite moved and influenced by that experience.”

Jon Stiehl and Rich Paini, both Class of ’93, were so enamored with the Henry’s Fork that they built a business there, TroutHunter Lodge. It started as a small fly shop and guide service; today it is one of the world’s foremost outfitters. Stiehl credits their internship at the HFF with setting them on that path.

“It was such a cool, eye-opening experience,” he said. “It changed the course of my life in a really valuable way.” 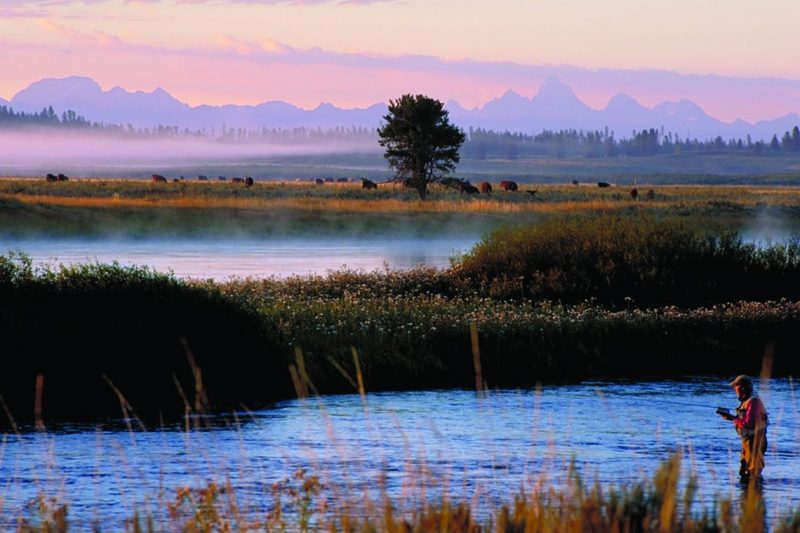 The Henry’s Fork of the Snake River, in Idaho, one of the premier fly-fishing spots in the world, and an area that has benefited immensely from the Knight internship program. Photo courtesy of Chris Brand ’89.

The success of the Knight program over three decades can be measured by the number of young lives changed, and by the impact their work has had on the environment through those nonprofit organizations. None of that would have been possible, however, without the network of people who have lovingly shepherded it through the years.

McDaniel and Murchison have helped to administer the program from Lexington since its inception, as has W&L wrestling coach Gary Franke, who also owns a home on the Henry’s Fork. In a twist, McDaniel now works every summer as a fly-fishing guide for TroutHunter Lodge. Kirk Follo, instructor emeritus of German and Italian, who served as Outing Club adviser during his time at W&L, was also involved.

Al Knight’s involvement in and enthusiasm for the program has never flagged. He and his wife, Gail (Paul’s mother, Betsey, passed away a few years after his death), travel to their own summer place in Idaho every year to meet the interns and see what they are learning. When it became difficult to find summer housing in the area for the interns, the Knights bought a four-bedroom condo to accommodate them.

In 2009, when Al Knight decided to contact all of the alumni who had interned in the program thus far, he was showered with responses of deep gratitude.

“To me, one of the phenomenal things about the program was how important it was to the Knights, and the extent to which the W&L students seemed to instinctively know that,” McDaniel said. “They would extend their relationship with the Knights beyond their three months in Idaho, and I was always stunned by the long, thoughtful letters they would write about how important the program was to them.”

Liz Todd, who calls Al and Gail Knight “the most fantastic humans,” feels forever indebted to them. “To offer that scholarship at no cost, in addition to a quite generous stipend, means it is a financially plausible experience for almost any student,” she said.

For Knight, the benefit is clear: “I think it sort of gives me a tie back to Paul, meeting people who are young and vibrant,” he said.

On the 25th anniversary of the program, Chris Brand ’89, a former Knight intern who serves on the HFF board of directors, organized a reunion of interns and their families. The crowd of more than 550 treated the Knights, McDaniels and Frankes to a standing ovation. In 2017, the Friends of Harriman State Park awarded the Turkey Feather Award to Al and Gail Knight for their impact on the organization.

“This is the most human and involved fellowship that I have seen at W&L,” said Murchison. “I’m sure there are others that are comparable, but Al Knight’s level of personal engagement really adds this intangible dimension to the whole thing. So I think we should all be grateful to him for what he has done.” 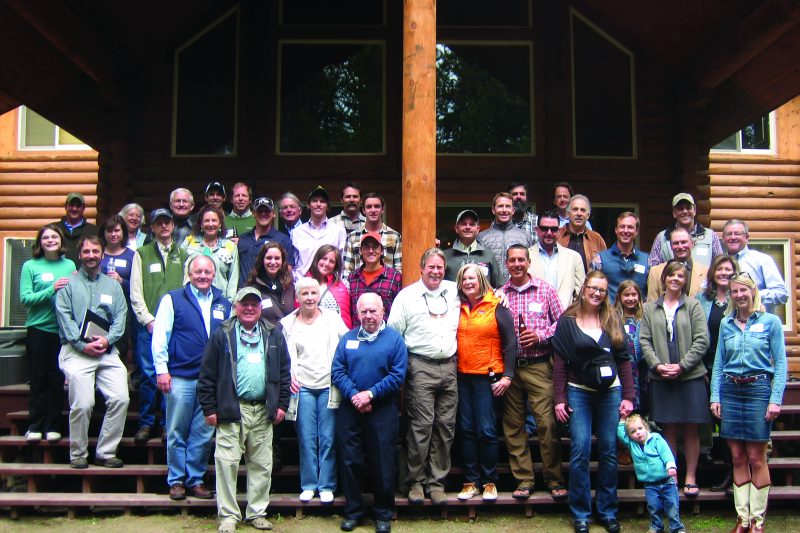 Past Knight interns and their families at a celebration of the program’s 25th anniversary, in Idaho. Paul’s father, Al Knight ’51L, is standing in front, wearing a blue sweater, with his hands clasped. Photo courtesy Gary Franke.

For more information about the A. Paul Knight Internship Program in Conservation, please click here.