Intro to Nanoscience A Spring Term course helps students with little or no science background understand the scientific principles that govern our world.

“How can you not do science? If you look around you, every aspect of your life involves science — pencils, clothes, drink, lighting and heating systems. This is what sustains our life.”

Think tiny. No, teeny tiny. Down to where you can manipulate the atoms of a material one by one.

The study of structures at this scale, nanoscience, is one of most exciting fields in science, with transformational applications in engineering, medicine and materials science. It’s an area where some of the world’s biggest problems are being solved at the smallest level.

Moataz Khalifa, visiting assistant professor of physics at W&L, is teaching a Spring Term course, An Introduction to Nanoscience, for students with little or no science background. The course was originally developed by Dan and Irina Mazilu, associate professors of physics at W&L.

“I have a mix of majors,” said Khalifa. “Classics, business, economics, math, engineering. It makes teaching a class like this interesting because I have to design a class that keeps all the students engaged. First, I want to offer a serious class to make sure the serious students don’t get bored. On top of that, this is a nanoscience class, so I have to start by teaching classical physics, which some of them haven’t seen — ever. And then when I take it to the nanoscale, everything changes again, so I have to teach them another kind of physics — quantum mechanics — and I have to do all that in four weeks.” 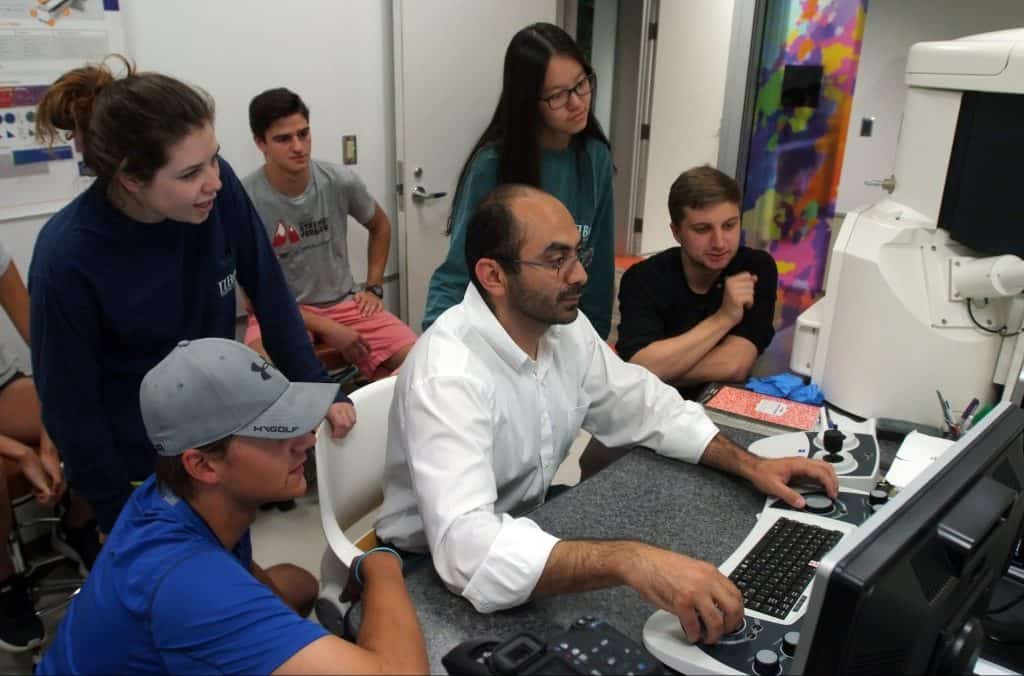 Professor Moataz Khalifa at the controls of W&L’s scanning electron microscope during a lab session for his Introduction to Nanoscience class.

Khalifa’s main objectives are to introduce students to the history of the field, the motivation driving it and the emerging technology that is changing our world.

He starts with Moore’s Law, named for Gordon Moore, one of the founders of Intel. “Moore said that the number of transistors and components in circuits was going to double every two years,” explained Khalifa. “He was making these predictions from the market and consumer point of view and the demand to make things more efficient and smaller. Lo and behold, this has been holding true since about 1965, when he introduced that idea. The semiconductor industry decided that this is where the industry should be and kept setting the bar higher and higher to make parts smaller and smaller. Electronic components came down in scale so much that the physical behavior of the materials began to change. When we started working with materials at the nanoscale, the quantum mechanical effects started showing up.”

Along the way, fascinating discoveries surfaced: the Bucky ball, graphene, carbon nanotubes. “With advances in science, we were able to approach and look at very small sizes,” said Khalifa. “This is where technology in our world is headed. As we build new structures, it’s going to take less material, cost less and be much stronger.”

Seeing is believing, and Khalifa took his class of nine first-years to Virginia Tech’s Division of Nanoscience labs for hands-on experience with state-of the-art equipment. The first session involved using the atomic force microscope to examine a film of anti-reflective coating deposited on a glass slide. “I’m trying to teach them why this is so important to us,” said Kahlifa. “If you touch the top of a table with your finger, it feels smooth. But to the atomic force microscope tip we used to image the polymer, it would be like trying to map the Grand Canyon with a broomstick. With this instrumentation we can manipulate individual atoms. I can pick up individual atoms one by one and put them anywhere I want to. The students thought this was pretty cool.”

The class satisfies the science requirement for graduation, which is why all of the students, except for one engineering major, took the class. “I’m scared of science in general,” admitted Davis Alliger ’19. “It seemed like it would be a pretty rough course because it all seemed like a foreign language to me. Professor Khalifa said, ‘Electrons are particles,’ and I didn’t know what an electron was. He started with a big sentence in which I didn’t understand a single word, and then he went back and explained it piece by piece. It makes sense now.”

While some of the labs take place at Virginia Tech, Khalifa is also introducing his students to W&L’s IQ Center and the high-tech tools available for research projects. In one lab session, the group mapped the surface of a butterfly wing and the edge of a quarter with the scanning electron microscope. Bouncing a stream of electrons onto the surface of these two objects demonstrated how difficult it is to get accurate measurements at this scale.

“A smaller beam of electrons covers a smaller portion of the surface, so you can get a more precise measurement,” Khalifa said.

“The downside is that you see a lot less. You also have to move the beam around because it can burn a hole in the material. If you don’t move it soon enough, the damage will give you imprecise readings.”

It’s a fascinating new world, and along with getting to know all about Schrodinger’s cat, nanobots and how to walk through walls, the students are gaining confidence in accurately describing the scientific principles that govern our world.

“I’ve heard people say that science isn’t their thing,” said Kahlifa. “You cannot say that in this day and age. Everything around us has so much technology associated with it. You might as well say, ‘Walking is not my thing.’

While Khalifa doesn’t expect his students to become experts after one class, what they learn just might be useful later on. He points to a former student who works for a bank that lends to nanotechnology investors.

“Out of all the applicants, he was the only one who had taken a class on nanoscience, and this class helped him get the job,” said Khalifa. “That’s what spurred the idea to develop more classes in this area. If the market wants that, then why not educate people who are not in the sciences? It’s beneficial for everybody.”