Jonathan Westervelt “Jack” Warner, a trustee emeritus of Washington and Lee University and a member of the W&L Class of 1940, died Feb. 18, 2017. He was a few months shy of his 100th birthday. 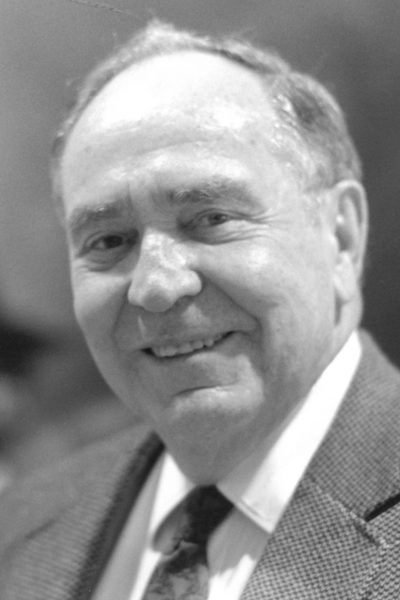 Jack Warner generously supported several areas of W&L, including the early 1970s addition to Doremus Gym that became known as the Warner Center; the 1990s renovation of Lee Chapel and Museum; the Elizabeth and Jonathan W. Warner Scholarship; outdoor tennis facilities; and the Annual Fund. Warner was an accomplished swimmer who once held the school record in the breaststroke; he belonged to the W&L Athletic Hall of Fame. The university recognized his philanthropy by including his name among the first alumni featured on the Honored Benefactors Wall, in Washington Hall.

Jack Warner was born in Illinois on July 28, 1917, to Mildred Westervelt Warner and Herbert Warner. He was raised in Tuscaloosa, Alabama, where his maternal grandfather’s company, Gulf States Paper, was based. He graduated from Culver Military Academy in Indiana in 1936, then earned a degree in business administration from Washington and Lee.

During World War II, he served in the U.S. Army (cavalry) as a commissioned officer with the MARS Task Force in the China-Burma-India Theaters of Operations.

After the service, Warner joined Gulf States Paper Corp. and was head of sales and production before being named executive vice president in 1950, president in 1957 and chairman of the board in 1959. In the latter two positions, he succeeded his mother, whose father, Herbert E. Westervelt, had invented a machine to produce folding, square-bottomed grocery bags. Warner stepped down as chairman of the board in 1994 to make way for his son, Jonathan Westervelt Warner Jr., a member of the W&L Class of 1967. The elder Warner remained a consultant with the company, which is now known as Westervelt Co.

During the more than 50 years he presided over Gulf States Paper, Jack Warner expanded it from a single factory and product to a diversified company with operations across five states. During his tenure, the company received multiple honors for water-pollution control efforts, including the National Wildlife Federation’s Whooping Crane Award. In 1970, he was Alabama’s Conservationist of the Year.

Warner contributed generously to a number of his favorite causes, including Washington and Lee University, Culver Military Academy, the University of Alabama (which awarded him an honorary Doctor of Laws degree in 1976), Auburn University, the United Way and the city of Tuscaloosa.

Warner served on the W&L Board of Trustees from 1970 to 1980 and in 1983. He left the board in 1983 to protest the growing momentum to admit women. Less than 20 years later, however, at Homecoming in 2002, he announced that he’d had a change of heart and presented the university with $1 million to fund scholarships primarily for women.

In addition, he enjoyed the acres of gardens that surrounded his home. One of his gardens even included a two-tiered brick replica of a Buddhist temple he had seen while stationed in Burma during World War II, according to a 1988 article in Alabama Magazine by his late son, David Warner.

None of Warner’s interests were as intense and enduring, however, as his love of art. His collection began just after the war with the purchase of several Audubon prints for a few hundred dollars. Over the years, he amassed a large and impressive private collection of American art that included not only paintings, but also furniture and decorative objects. His painting collection eventually included works by such artists as Georgia O’Keeffe, Robert Henri, James Abbott McNeill Whistler, Frederic Church, Andrew Wyeth, Mary Cassatt, Edward Hopper and John Singer Sargent.

He received the Frederic Edwin Church Award in 2010 for assembling his private art collection, part of which was displayed at his Westervelt Warner Museum of American Art from 2002 until 2011. The Tuscaloosa Museum of Art now houses the Westervelt Collection. In 2012, the Jack and Susan Warner Gallery, featuring works of the Hudson River School, opened in the Metropolitan Museum of Art.

Warner had a soft spot for paintings of George Washington, and he gave his alma mater the William Winstanley portrait of Washington that now hangs in W&L’s Leyburn Library. He also served as the honorary chair of the university’s 250th anniversary celebration.