James Dickey, Masked and Unmasked The life mask is perhaps the single most valuable item in a collection of more than 1,000 Dickey items in W&L Special Collections. 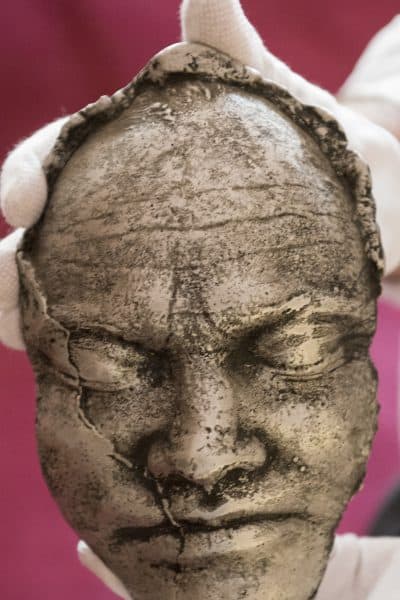 This live mask of poet and novelist James Dickey is part of a larger Dickey collection housed at W&L Special Collections. The collection was donated by Ward Briggs Jr. ’67.

One of the most unusual items to grace the shelves of the Special Collections vault is a metal cast of a life mask of the late poet James Dickey. The mask was made by a distinguished American artist and educator, William Dunlap.

The mask is perhaps the single most valuable item in a collection of more than 1,000 items donated in 2014 by Dr. Ward W. Briggs Jr. ’67. Briggs is Carolina Distinguished Professor of Classics at the University of South Carolina and the editor of the book “The Complete Poems of James Dickey” published by the University of South Carolina Press in 2013.  The Ward Briggs Collection of James Dickey consists of the research material generated or collected by Briggs in the compilation of that 2013 edition.

At the time the mask was created, Dunlap was artist-in-residence at Appalachian State University. The mask was requested by Dickey, who apparently had a lifetime fascination with masks and who wore the mask for the February 1976 cover of Esquire magazine. W&L’s mask is one of three made from the original impression. The other two reside in the James Dickey Collection at Emory University.

It was in sitting for the composition of this aluminum life mask that Dickey was temporarily blinded.  According to Esquire, while the sculptor was forming the plaster cast, calcium seeped through to Dickey’s eyes and produced an alkaline burn that scalded his corneas. The poet was raced from Boone, North Carolina, to Johnson City, Tennessee, for medical treatment that saved his vision.

Dickey claimed in the magazine that chemicals used in the making of the mask had blinded him for about a month (other accounts say that he was sightless only for several hours) and that the experience was the starting point for a story, “Cahill is Blind.” This story, which was featured in the February 1976 Esquire, ultimately led to his second novel, “Alnilam.”

“Alnilam” (1987) was a massive, ambitious and ultimately flawed story, set in the early days of World War II, about a blind man who sets off in search of the son he never knew. Unfortunately, the book never attained the critical success of Dickey’s famous first novel, “Deliverance,” which had been published 17 years before.

Ward Briggs will be the speaker at the annual meeting of Washington and Lee University’s Friends of the Library on May 13 at 1:30 p.m. in Northen Auditorium, Leyburn Library. His talk, “James Dickey and ‘Life’: How Poems Are Made,” is free and open to the public.

To read more about the Dickey collection at W&L, click here.