Jefferson Davis Futch III, professor of history emeritus, who taught at Washington and Lee University for 46 years until his retirement in 2008, died on Sept. 21, 2017, in Lexington, Virginia. He was 85.

“Though I’ve been here only a short time, I have learned about Professor Futch’s enduring commitment to his profession and his students,” said W&L President William C. Dudley. “My thoughts are with his friends, his former colleagues in the History Department, and the rest of the Washington and Lee community as we reflect on his life and his contributions to the university.” 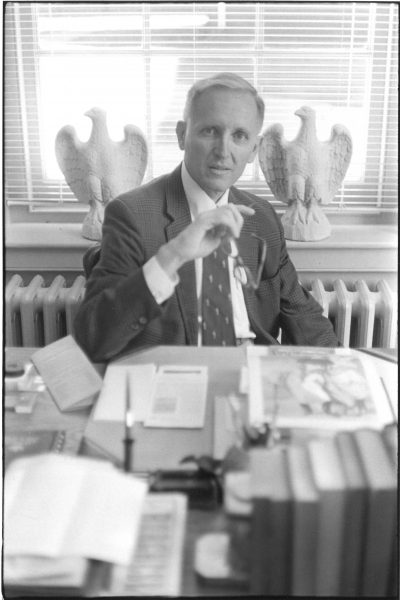 He joined the W&L faculty in 1962. He became an associate professor in 1966 and a full professor in 1970. He taught the history of Europe since 1815, of Venice and of the papacy. Futch served on W&L’s admissions committee from 1966 to 1969. He belonged to Phi Beta Kappa and the German Honor Society.

“Dave was revered by generations of W&L history students,” said his longtime colleague David S. Peterson, W&L professor of history. “His lectures, delivered without the aid of notes, are legendary. He was a master of detailed, witty, enthralling historical narration. He will be deeply missed and fondly remembered.”

A long-time contributor to the National Review, Monarche Nuova and Relazioni, Futch also wrote book reviews for the Richmond News Leader, and wrote the preface (in Italian) to an Italian book, “The Conservative Movement in the United States” (1970).

He served on the advisory council of Americans Against Union Control of Government and belonged to the American Historical Association and the Society of Italian Historical Studies.

“He was a renowned teacher, very popular with students and a mainstay in the History Department,” said Provost Marc Conner. “His lectures on 20th-century German history were famous, as was his Spring Term course on the Papacy. He was a champion of traditional conservative thought, and scores of alumni remember him with great affection.”

Futch was honored by students at a 1973 testimonial dinner, and in 1987 he received the William Webb Pusey Award III for outstanding service and dedication to the university. His retirement in 2008 was even noted in the Congressional Record.

Futch, whose pastimes included music and stamp collecting, was famous for requiring male students to wear ties to his classes and in his office long after W&L had relaxed its dress code. “Boys without ties look like juvenile delinquents,” he told the Roanoke Times & World-News in 1977. He provided ties for those who needed one. He also told the Roanoke paper, “Dealing with students is much nicer than dealing with people.”

On Friday, Oct. 6, during Parents and Family Weekend, the Department of History hosted a remembrance of Professor Futch.

On Saturday, Nov. 18, at 2 p.m., a memorial service will take place in Lee Chapel on the W&L campus. A reception will follow at the R.E. Lee Hotel. In lieu of flowers, donations may be made to the Dr. Jefferson Davis Futch III Speaker Forum at The Spectator: A Magazine of Student Thought and Opinion.