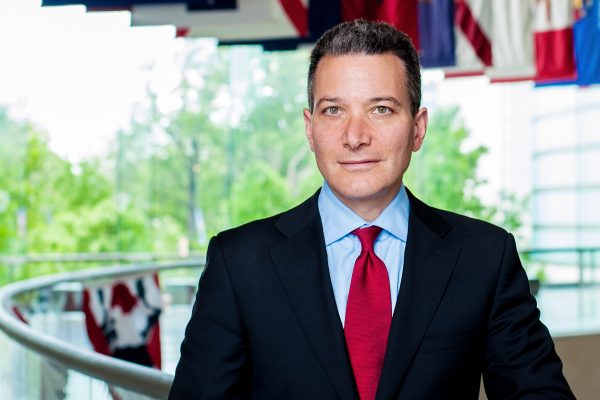 Jeffrey Rosen, president and CEO of the National Constitution Center and professor of law at George Washington University, will give a public talk on Justice Louis Brandeis at Washington and Lee University on March 20 at 5 p.m. in Lee Chapel.

He will speak on “The Curse of Bigness: What Would Brandeis Say about Privacy in the Age of Google and Facebook.” The talk is free and open to the public.

Rosen’s talk will draw upon his recent biography of Brandeis, “Louis D. Brandeis: American Prophet” (2016), and Brandeis’ extensive writing on privacy in the digital age. Brandeis called for a more robust protection of privacy rights in the article he wrote with Samuel Warren in the Harvard Law Review, “The Right to Privacy,” where they outlined the right to be left alone.

Brandeis regarded the government as the protector of privacy against incursions by media and other corporate entities. Brandeis also challenged the power of corporations more generally in his famous book, “Other People’s Money and How the Bankers Use It” (1914). Rosen will discuss how “the border that surrounds our right to privacy has been transformed by technology” and how Brandeis might apply his progressive-era thinking to contemporary privacy issues.

Rosen is senior nonresident fellow at the Brookings Institution. He is a contributing editor to The Atlantic and his work frequently appears in major news publications.

He has appeared as a guest on National Public Radio, was a staff writer at the New Yorker, was commentator on legal affairs for The New Republic before joining The Atlantic and is a frequent contributor to the New York Times Magazine. He also has testified before Congressional committees on campaign finance, data mining and electronic surveillance, and the Fourth Amendment.

The Chicago Tribune named Rosen one of the 10-best magazine journalists in America, and the Los Angeles Times called him the nation’s most widely read and influential legal commentator.

In addition to Rosen’s book on Brandeis, his publications include “Constitution 3.0: Freedom and Technological Change” (2013), co-ed.; “The Supreme Court: The Personalities and Rivalries that Defined America” (2007); and “The Most Democratic Branch: How the Courts Serve America” (2006).

Borders and Their Human Impact is a two-year faculty colloquium sponsored by the Andrew W. Mellon Foundation. The colloquium addresses the concept of borders and border crossings from a variety of perspectives that tie humanity to political, geophysical, physiological, epistemological and spiritual borders.

Related //The College, The School of Law, The Williams School
Tagged //Borders and Their Human Impact
Loading Comments...