Jennifer Peszka, a member of Washington and Lee University’s Class of 1994 and a psychology professor at Hendrix College, has been named the 2015 Arkansas Professor of the Year by the Council for Advancement and Support of Education (CASE) and the Carnegie Foundation for the Advancement of Teaching.

Peszka’s selection was announced at a Nov. 19 awards luncheon in Washington, D.C., and presented at a congressional reception at the Folger Shakespeare Library that night.

“Whether she’s teaching an introductory or an advanced course, Dr. Peszka’s dedication to her students’ success and her enthusiasm for her discipline have inspired hundreds of Hendrix students,” said Hendrix Provost Terri Bonebright in a news release. “She is nationally renowned for her research and has ignited a passion for research among countless students, including several students who have followed her example in the classroom and in the lab.

“Not only has she worked tirelessly with her colleagues to develop the psychology program into one of the most popular majors on campus, she has served on countless committees whose work is responsible for some of the most significant advances in our academic program,” Bonebright continued.

A native of Harrison, Arkansas, Peszka joined the Hendrix faculty in 1999. She earned her doctorate from the University of Southern Mississippi.

CASE launched the U.S. Professors of the Year Awards Program in 1981 to highlight its support of, and belief in, the work of higher education institutions. That same year, the Carnegie Foundation for the Advancement of Teaching began hosting the final round of judging and in 1982 became the primary sponsor. 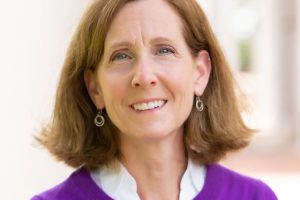 Karla Murdock Named Next Director of the Mudd Center for Ethics