Joelle Phillips ’95L: From Acting to Law, to the Head of AT&T Tennessee 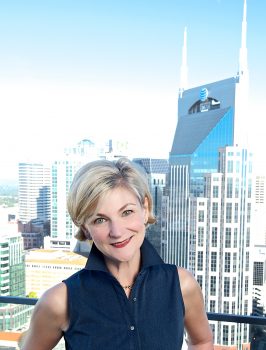 Uncas McThenia looked over the collection of students on their first day of class – his contracts class. He posed a question, then glanced at the roster students for a name and settled on Joelle James (now Phillips). It was the first day, the first question, and adrenaline-fueled students turned toward their classmate.

She was nervous, but Joelle Phillips steadied the butterflies in her stomach with practiced calm.  Before deciding to go to law school, Phillips planned on a career acting and spent a year touring with a children’s theater.  Law school was new, but managing stage fright wasn’t.

The similarities between acting, practicing law and her current position as president of AT&T Tennessee are not lost on her.

“I was surprised by how much of my theater training was useful as a law student,” Phillips recalls. “I was accustomed to memorizing lines, and reading cases reminded me of reading plays and looking for the underlying theme.”  Best of all, free from the paralyzing stage fright some students felt as they faced the Socratic method, Phillips could relax and listen – not just to professors but also to other students.  “My classmates were smart.  I learned so much from their perspectives.”

Phillips found the same type of camaraderie with other students that she had enjoyed as a cast member. She was pleased to find it after law school among law associates and her AT&T team members.

Her progression from actress to bankruptcy lawyer to corporate attorney led her to the top position at AT&T Tennessee. President since 2013, she joined the company – BellSouth then – as a general attorney in 2001. Under her leadership, the company undertook a multi-year campaign to reform state telecom laws. Success enabled the company to enter new lines of business and set the stage for big investment (more than a billion dollars for capital expenditures over just the last three years) in infrastructure to support new technologies in the state.

Phillips’ focus on regulatory reform began before she arrived in the C-Suite. She describes it as a product of her experience as the company’s attorney and her training at W&L. “As a regulatory lawyer, it seemed absurd to apply rules fashioned for old technology to new and different technology.  Rules designed for monopolies did not align with today’s competitive ecosystem of players,” she says.  “Sometimes the best thing a lawyer can do is recognize that the law needs a change.”

Lately much of her time is spent on state education policy, with a focus on the talent pipeline. Jobs with AT&T used to be mechanical. “We trained technicians to make physical connections using manual tools.” Today, those same technicians need digital skills, installing and repairing service with software and coding skills.

The need to keep building skills and expertise extends to Phillips personally as well. “To be strategic, I need to be informed on what’s next,” she said. To that end, she reads a lot to keep up with technology that is continually advancing.

With nearly 6,000 AT&T Tennessee employees, Phillips has adopted a management philosophy that draws on what she admires most about the famed research and development arm of the former AT&T monopoly – the former Bell Labs. “It was an amazing place that produced 12 Nobel Prizes,” she said. Phillips focuses on two of the labs’ rules: mix up the specialties (creating teams of people who have different skills) and leave your door open (accepting assignments from other teams beyond one particular silo). “As I think about harnessing talent and driving innovation today, I try to remember the magic that Bell Labs made by encouraging diverse teams to collaborate and help one another.”

The daughter of an engineering professor at Auburn University, Phillips has adopted the personal and professional qualities she saw in her father and other engineers. “Engineers are optimistic people; they assume there is a right answer,” she said.

She uses that background to tackle challenges today. She starts with the assumption that “there is a way to get this worked out.” She also emphasizes the importance of being prepared. While people think some lawyers are just naturally good on their feet, “it’s because they did their homework,” she said. “Preparation enables you participate in the moment, to be ready when a colleague has an inspired idea and needs your help to bring it to fruition.” 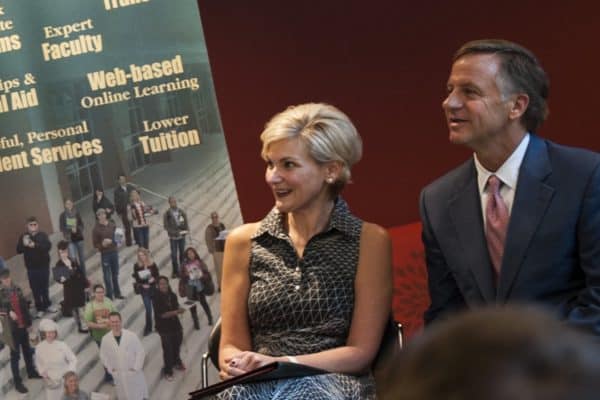 Joelle Phillips with Tennessee Governor Bill Haslam. As chair of the Business Alliance for the Drive to 55, Phillips works with Haslam and other state leaders to expand Tennesseans’ post-secondary attainment rates.

Phillips sees W&L law faculty creating the same type of cross-disciplinary opportunities and benefits that she admires in the scientists and engineers of Bell Labs. “The faculty was both interested and interesting,” she remembers, “not just in their own course work or specialties but also in the other areas we were studying. By talking with us about all the areas we were studying, they helped us to find the patterns in the law”

“We often hear the concept of ‘thinking like a lawyer,’ but I think the faculty at W&L helped instill a lawyer’s instinct as well.” Over time the students developed an instinct based on the patterns revealed by W&L faculty.

Faculty also helped Phillips chart a career course. Prof. Alan Ides recommended her to serve as a law clerk to Judge Rhesa Hawkins Barksdale on the U.S. Court of Appeals for the Fifth Circuit.  That recommendation carried extra weight because Ides and Barksdale had both clerked for U.S Supreme Court Justice Byron White.

Phillips also recalls good advice from professors Brian Murchison and Laura Fitzgerald Cooper about choosing between practice areas. Both professors highlighted the difference between studying the law and practicing and encouraged her to talk with practicing lawyers about  how their specialty looked day to day. “It was great advice. It helped me realize that I wasn’t actually interested in practicing trust and estate law. I just loved listening to Ned Henneman talk about it.”

After her clerkship, she joined the Atlanta firm Long, Aldridge & Norman. After marrying Brant Phillips ’97L, the couple relocated to Nashville where she joined Waller Lansden Dortch & Davis. At both firms, she specialized in business bankruptcy litigation, so she was surprised when a headhunter insisted she was the right fit for an opening in the in-house regulatory litigation group at BellSouth.

The headhunter was right. Phillips moved up through the legal department and became the first female to serve as president of AT&T Tennessee. Today as one of Tennessee’s most high-profile business leaders, she is an outspoken advocate on education policy, which she believes is key to the state’s prosperity. As chair of the Business Alliance for the Drive to 55, Phillips works with Tennessee Gov. Bill Haslam and other state leaders to expand Tennesseans’ post-secondary attainment rates.

Still interested in the arts, Phillips serves on the board of the Nashville Repertory Theater. She loves that the theater has become an “incubator” for playwrights. Recently, professional playwright Christopher Durang came to Nashville to work on his latest play, while mentoring aspiring playwrights through Nashville Rep’s Ingram New Works Festival. Phillips looks forward to the festival’s growth, making Nashville the “Sundance” for new theatrical works.

Does her work with Nashville Rep make her wonder about the road less traveled?  She laughs as she considers her unlikely career path, but she sees a consistent theme.  “My work places me in the center of a very creative enterprise.  It’s about innovation, communication and surprising changes.”