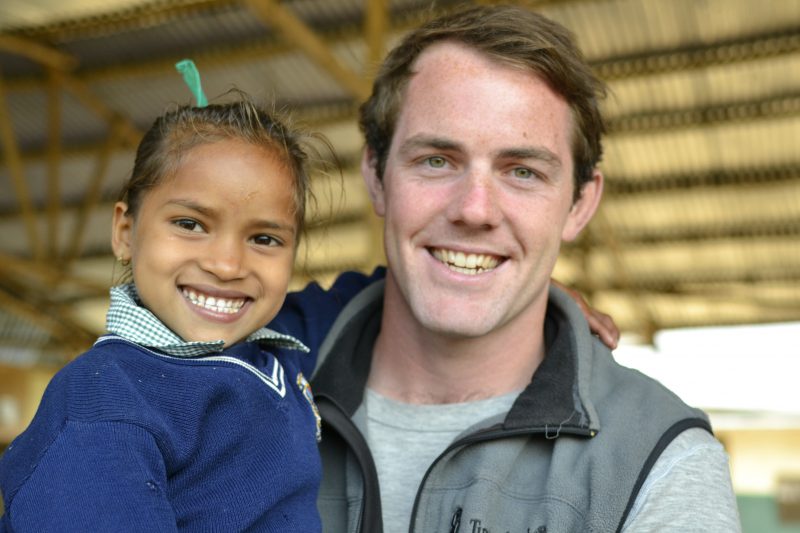 John Christopher ’09 was working for an NGO in Surkhet, Nepal, with plans to return to the United States, get an MBA and continue with his career in financial consulting.

Walking a young Nepalese girl home from school one day changed everything.

“It was a turning point for me,” he said. As he and little Sunita neared her residence, he realized that “home” for her was a family of six living in a structure smaller than a minivan.

Christopher also realized during his 16-month fellowship that most international aid in Nepal was centered in the larger cities. Rural communities got little to no attention, but the need for medical and educational assistance was great.

“Rural areas are challenging because they are in mountainous areas and were hit hard during the country’s civil war,” said Christopher. Because of poor infrastructure and ongoing political turmoil, government assistance is scarce.

“I felt an immediate, emotional connection” to the people in Nepal. He said his realization of their needs was like “peeling back an onion.” As more layers were exposed, more needs became apparent.

Christopher responded by creating The Oda Foundation, a nonprofit organization based in the village of Oda, in the rural Kalikot district of Nepal. The foundation is dedicated to improving the health and education of people in the district.

The foundation opened a health clinic in December 2013, and two months later began a partnership with the local school system. The clinic’s staff of seven Nepalis, bolstered by a flow of western medical professionals, has treated more than 7,000 people. Christopher views the clinic as a prototype for increased coordination with the Nepali government and an increased network of reliable, well-equipped and professionally managed health facilities in the country’s other rural districts.

“The foundation has also augmented current government school programs and incentivized increased teacher aptitude while working with more than 500 children in the process,” said Christopher.

The clinic’s top priority is “prevention of avoidable death,” he said. Through early intervention and treatment of such things as burns, typhoid, diarrhea and pneumonia, the clinic has seen the rate of avoidable death plummet. It is too soon in the clinic’s history to have reliable, long-term statistics, but Christopher said, “We have been really successful in a short period of time.”

Christopher spends eight months a year in Nepal and four months back in the United States, where he focuses on outreach and fundraising for the foundation. He continues as a contract worker for two financial services companies, including the one he worked for before going to Nepal, in order to support himself, so that all money donated to the foundation can go directly to help the people of Nepal.

There are several W&L connections on the Oda Foundation’s board of directors, including two graduates, a professor, a parent of three students and a Law School graduate. A 30-member advisory board has about 50 percent young W&L graduates.

A native of Ft. Lauderdale, Florida, Christopher followed his sister, Mary Christopher ’06, to W&L. He was looking for a college that had excellent academics and an athletic program that would allow him to continue wrestling. He knew immediately that he fit well at the University. “W&L is an amazing place,” he said.

It was a class at W&L—Business, Government and Society—that started Christopher thinking about serving people through social entrepreneurship. Taught by Sandy Reiter, associate professor of business administration and Oda board member, it was where he first discussed “the role and responsibility we have as individuals” toward our fellow human beings, he said.

That contributed to his decision several years later to pursue the fellowship to Nepal. He had no idea that he would not come back to his former life, but he also realized that he applied for the fellowship because he hadn’t really found his passion. “I had been looking at college as a gateway to a higher income,” he said.

When he met the people of Nepal, he realized that because of his education, “I had the toolkit for making meaningful change in their lives.” His business education also has helped him with budgeting and with speaking to sophisticated donors.

Now, Christopher lives in two worlds, with two homes. In the U.S., he handles foundation business while earning a living by consulting. In Nepal, he manages the Oda Foundation’s health and education services. He hopes the foundation will one day have the resources to hire more staff, but for the time being, he is both visionary and administrator.

In both countries, “I am working on building relationships and raising awareness” to continue the foundation’s work, he said.

And he hasn’t forgotten the little girl who turned his life around. He continues to support Sunita with a monthly check to the NGO that first brought him to Nepal.