“Particularly at a time when the relations between institutions and their histories is under scrutiny, Holloway’s is a voice of reason and inquiry and value.” 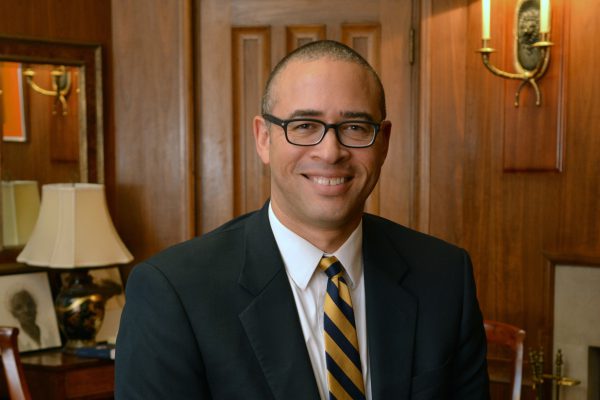 Jonathan Holloway, historian of post-emancipation American history and black intellectualism and dean of Yale College, will be the featured speaker at Washington and Lee University’s Founders Day/Omicron Delta Kappa Convocation, on Jan. 19, at 5 p.m. in Lee Chapel.

Holloway will speak on “The Price of Recognition: Race and the Making of the Modern University.” He will be signing copies of his book, “Jim Crow Wisdom: Memory and Identity in Black America Since 1940,” on the museum level of Lee Chapel from 4:00 to 4:30 p.m. Visitors attending the book signing are asked to use the side entrance.

The talk is free and open to the public. The program will also be broadcast live online.

Holloway’s address will precede the induction of 22 undergraduate students, 16 law students and 6 honorary initiates into membership in Omicron Delta Kappa, the national leadership honor society for college students, faculty, staff and administrators, founded in 1914 at Washington and Lee. The University Singers will perform.

Holloway is dean of Yale College and Edmund S. Morgan Professor of African American Studies, History, and American Studies. He specializes in post-emancipation United States history, with a focus on social and intellectual history. He is the author of “Confronting the Veil: Abram Harris Jr., E. Franklin Frazier, and Ralph Bunche, 1919–1941” (2002) and “Jim Crow Wisdom: Memory and Identity in Black America Since 1940” (2013), both published by the University of North Carolina Press. He edited Ralph Bunche’s “A Brief and Tentative Analysis of Negro Leadership” (NYU Press, 2005) and co-edited “Black Scholars on the Line: Race, Social Science, and American Thought in the 20th Century” (Notre Dame University Press, 2007). He has written an introduction for a new edition of W.E.B. Du Bois’s “Souls of Black Folk,” published by Yale University Press in 2015, and is working on a new book, “A History of Absence: Public Narratives, Race, and the Making of the Modern World.”

Holloway won the William Clyde DeVane Award for Distinguished Scholarship and Teaching in Yale College in 2009 and the Before Columbus Foundation’s American Book Award in 2014. He served as the master of Calhoun College from 2005 to 2014 and was chair of the Council of Masters from 2009 to 2013. He began a three-year term as chair of the Department of African American Studies in 2013. That term was abbreviated when he became dean of Yale College in July 2014.

Holloway has held fellowships from the W.E.B. Du Bois Research Institute at Harvard University, the Stanford Humanities Center and the Ford Foundation. He was an Alphonse Fletcher Sr. Fellow from 2011 to 2012. Currently, he is a Distinguished Lecturer for the Organization of American Historians.

Holloway received a bachelor’s degree with honors in American studies from Stanford University. He earned three advanced degrees in history from Yale: an M.A., an M.Phil. and a Ph.D. He began his academic career at the University of California, San Diego, before joining the faculty at Yale in 1999 and becoming a full professor in 2004. He will become the provost of Northwestern University in July 2017.

Marc Conner, interim provost at Washington and Lee, describes Holloway as “one of the leading intellectual figures in African American studies.”

“His work on leadership and race is especially influential,” Conner said. “Particularly at a time when the relations between institutions and their histories is under scrutiny, Holloway’s is a voice of reason and inquiry and value. I’m very excited to hear his remarks at our Founders Day event.”

ODK has more than 285 active circles, or chapters, at colleges and universities across the country. Headquartered in Lexington, Virginia, ODK awards annual scholarships and leadership-development initiative grants and holds a national day of service each April. Individual circles conduct additional leadership-development activities.