“We must teach rigorous, critical thinking so young reporters will be more skeptical and dogged to find the best sources, unpack promises, reveal hidden agendas and follow the money trails.” 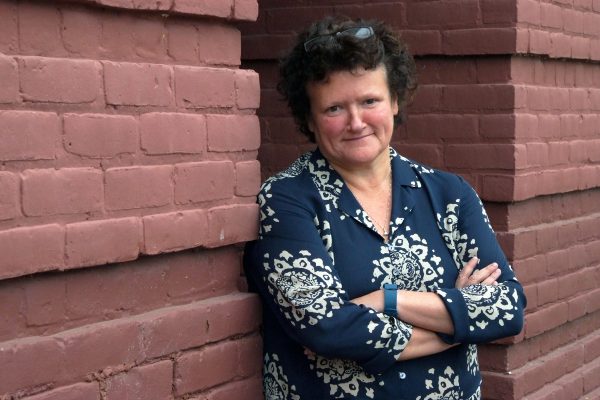 Swasy, who has spent seven years studying the topic, analyzing thousands of articles over a fifty year period, argues that “despite the criticism of the biggest newspapers as being out of touch, the best coverage of serious issues facing rural America has been delivered by the New York Times and The Washington Post. Both look for stories that put a face on what really happens when policies made miles away in Congress hit small towns.”

Acknowledging that today’s news media face real challenges in providing consistent coverage of America’s heartland, Swasy points out that the problem is also one of politics. “Just like the problems that vex rural America’s poor, there’s another thing that doesn’t change much — politicians don’t show up in these parts. The reason is quite simple: the back roads of Kentucky and West Virginia do not attract $10,000 a plate fundraiser dinners of filet mignon and haricot verts.”

You can read the full essay below or on poynter.org.

A striking miner sat in a tin-roofed picket shack, whittling a long branch into the shape of a baseball bat. Here in Southwest Virginia’s coal towns, hundreds of union miners like him had walked out of Pittston Coal’s mines in 1989 to protest cuts in health benefits.

As a reporter for The Wall Street Journal, I visited the shack to get the miners’ side of the story. When I introduced myself, the miner leapt from his seat and screamed: “Go home, bitch!”

Being young and, well, rather stupid, I argued with the bat-wielding man. Don’t assume that I write only for CEOs, I told him. I’m a farm kid from Pennsylvania coal country. My brother-in-law, Ben Hill, is a roof bolter and shuttle car operator for R&P Coal and a proud member of the UMWA, Local 3548.

The miner smiled, and invited me to sit down and talk. He helped me tell a far richer, more nuanced story of the older miners on strike, men who watched their college-educated sons cross those picket line to work as engineers and managers inside the Pittston office. They were proud that their backbreaking labor meant their children didn’t have to work in dark, dank mines.

Fast-forward to 2016, and much of the post-mortem election discussions focus on whether journalists spend enough time talking to the folks in places like Southwest Virginia.

The pundits, politicians, journalists and academics are scrambling to figure out what happened. The “peasants” rose up. The wage gap fueled anger. Main Street is fed up with Wall Street. In short, nobody is really listening to one another.

Part of the election autopsy has been a predictable “blame the media” refrain that naturally follows when the polls and front pages missed what was really happening in the heartland. In reality, the ebb and flow of coverage of “the haves and have-nots” has been the same for 50 years since President Lyndon B. Johnson declared the “War on Poverty,” a pledge to create better schools, jobs and highways to connect Appalachia with the prosperity enjoyed in the rest of post-World War II America.

LIFE magazine’s black-and-white photo essay in January 1964 showed Delphi Mobley and her daughter, Riva, who was sick with measles in a family that couldn’t pay for a doctor. Other news reports followed, but soon vanished as the media and politicians focused on Vietnam — LBJ’s other war, which got more funding and ink.

The next five decades repeated the cycle of political and media interest in rural America. The U.S. economic picture was a story of boom and bust for the bulk of Americans: “greed is good” turned into overleveraged consumers. Then all news focused on America’s most frightening and unexpected war — the war on terrorism. Next was the Great Recession in 2008. Once major cities shook that off, the ongoing financial woes of small-town American life remained an occasional story.

So, do we just “shoot the messenger?” It’s not that simple. To understand Main Street America, journalists now must explain the global marketplace, including the meteoric rise of China and India, and the geopolitical stakes of instability in North Korea, Pakistan and Syria.

As a journalist-turned-Ph.D., I’m still chasing stories that matter, especially in this growing gulf between “the haves and have-nots.” I’ve spent seven years studying how the news media cover rural America. For this research, I analyzed thousands of articles spanning 50 years from 1964-2014. The stories were collected in 2009 and again in 2014 from the nation’s largest newspapers, news weekly magazines and the leading Southeastern U.S. papers, largely because they cover most of Appalachia.

The research shows reason for optimism: Reporters and photographers given the chance to travel to remote areas have done a terrific job of putting a face on the plight of the poor. The coverage is guided by what scholars call “frames” to tell the stories. According to media scholar Robert Entman, the frame determines “whether most people notice and how they understand and remember a problem, as well as how they evaluate and choose to act upon it.”

From this review of 50 years of stories, I found the following dominant frames: The rural poor lack basic necessities, such as housing. They don’t have access to good jobs and suffer a disproportionate share of chronic health problems. Federal programs have failed them and politicians only pay attention to them when it’s time to run for office. And, finally, the folks in rural America commit crimes, usually involving moonshine, marijuana, meth and opioids.

The research shows that, despite the criticism of the biggest newspapers as being out of touch, the best coverage of serious issues facing rural America has been delivered by the New York Times and The Washington Post. Both look for stories that put a face on what really happens when policies made miles away in Congress hit small towns.

Times reporter Diana Jean Schemo traveled to Alabama’s so-called “Black Belt” to gauge the impact of the Bush administration’s “No Child Left Behind” mandates to raise test scores. Inside the John Essex School, she found bare electrical wires dangling from the ceiling and antique textbooks that don’t cover the outcome of the Vietnam War and whether a man ever walked on the moon. This remains true in many rural school districts.

Likewise, the Post sends reporters well outside the Beltway to chronicle a hidden economy of selling moonshine when no other jobs are available. Reporter Jerry Markon wrote in 2008 about Rocky Mount, Virginia, where agents from the Bureau of Alcohol, Tobacco, Firearms and Explosives staked out a distillery in the woods. The story was presented without judgment of the locals. Rather, it showed how the rural Franklin County actually prides itself as the “Moonshine Capital of the World.”

Just like the problems that vex rural America’s poor, there’s another thing that doesn’t change much — politicians don’t show up in these parts. The reason is quite simple: the back roads of Kentucky and West Virginia do not attract $10,000 a plate fundraiser dinners of filet mignon and haricot verts.

The autopsy of the 2016 election must include some tough choices by news organizations on how to do a more consistent job of covering America’s heartland. And those of us now teaching future journalists need to work harder to reinforce the basics of quality reporting. We must teach rigorous, critical thinking so young reporters will be more skeptical and dogged to find the best sources, unpack promises, reveal hidden agendas and follow the money trails. We must teach them that Twitter is not a replacement for knocking on doors and going to the picket lines.

But Americans need be more critical and ask their Washington representatives, senators and president: Are you listening? The W.K. Kellogg Foundation did an anonymous survey of members of Congress to gauge why rural America is ignored by D.C. lawmakers. The research was done 14 years ago, but still holds true today. Only those causes supported by big money get attention.

Rural America is far behind General Motors and Carnival Cruise Lines in getting politicians to listen. Even cats and bunny rabbits have more advocates trying to keep them out of shampoo research labs.

Many unemployed workers in rural America voted for Trump, thanks to his pledge to bring back coal jobs. But energy experts and miners themselves will tell you that the Appalachian coal industry isn’t coming back. Coal’s death knell was lower global demand, the move to cleaner alternatives such as natural gas and renewable energy sources. Indeed, Ben was laid off in the late 1990s when R&P closed the mine. UMWA Local 3548 is now shuttered, too.

Alecia Swasy is the Donald W. Reynolds Chair in Business Journalism at Washington & Lee University. Previously she worked as a reporter and editor of The Wall Street Journal and The Tampa Bay Times. She earned her Ph.D. in Journalism Studies from the University of Missouri. She is working on a book about rural America.