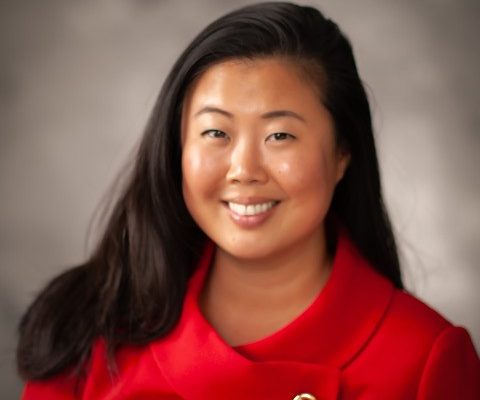 Joy Lee, ‘12L, is not an event planner, but you could be forgiven for thinking that. From organizing themed dinner and brunch parties for friends at home to overseeing contracts for the 2016 inaugural festivities and the 2020 Republican National Convention events, she seems to always be in the middle of planning social gatherings.

Currently serving as counsel to the 2020 Republican National Convention, she has had to be flexible as well as proficient in the law. Her job, she says, is “the crossroads between politics, law and event planning.” She moved to Charlotte, N.C., a year ago to help plan the convention, but quickly relocated to Jacksonville, Fla., when the convention was forced to move its celebratory events there due to the ongoing pandemic. After a COVID-19 spike in Florida, a scaled-down version of the convention is now scheduled back in Charlotte later this month.

Formerly a law clerk for the 2016 convention, she is now in charge, helped by “a lean but mighty team,” consisting of a deputy, and intern and some outside help. They are working under a tight deadline to have everything in place by the Aug. 24 start of the convention.

She sees some differences in this convention versus the one in 2016. “It is a dynamic change” having a sitting president as the presumptive candidate versus an open primary, she said.

While Lee always wanted to end up working in politics, she left W&L in 2012 in what she describes as “a rough time” for law school graduates. She completed a post-graduate fellowship with the Charlottesville, Va., public defender’s office and then went to work in D.C., in labor law, including a stint as attorney advisor at the Federal Labor Relations Authority.

Because she “wanted to get her foot in the door in politics,” she took a pay cut and a title cut to work the 2016 convention. After the convention, she joined Americans for Prosperity, a nonprofit organization that advocates for a free and open society and against unsustainable government spending and debt. She served as senior counsel for a dozen state chapters, ranging from Alaska to Georgia. Each chapter had “unique policy challenges,” each with state campaign finance laws that varied drastically. She helped the chapters stay compliant with laws while also enjoying “getting to know the small towns and cultures around the country.”

She took a brief leave from Americans for Prosperity to work on the 2016 Presidential Inaugural Committee. “It was similar to convention work – planning for large-scale events, but this time, inaugural balls and celebratory dinners and lunches,” she said. It was important to understand the venues and contracts, down to the details of whether a sidewalk belonged to the city or the federal government. “Permit requirements are different for each,” she said.

Again, working on a tight deadline, she pushed through contracts “in short order” with florists, caterers, and other contractors, “alongside the logistics crew.”

Prior to joining the 2020 convention team, Lee worked at the U.S. House of Representatives as counsel to the House Administration Committee and focused primarily on campaign finance and election law matters. The committee handles “a hodge-podge” of issues that don’t fall neatly into the subject areas of other committees, she said. The committee oversees the Federal Elections Commission and the Election Assistance Commission, among other duties.

Lee received a bachelor’s degree in communications from the University of Maryland, College Park. She applied to a large number of law schools and tried to visit as many as possible. She was impressed with W&L’s Honor System, and realized that after four years at a large, state university, she craved “more of an intimate environment.” She knew law school would be challenging and wanted a closer relationship with professors and classmates.

She credits Prof. Samuel Calhoun for sparking her interest in contracts, and she remains impressed with Prof. Benjamin Spencer’s analytic approach to civil procedure. Prior to moving to Charlotte, she served as president of the university’s D.C. Alumni Board, the largest W&L alumni chapter in the country.

Born in Seoul, South Korea, Lee came to Los Angeles with her parents when she was 1 year old. The family also lived in Baltimore County, Maryland. “We waited in line; we went through the legal procedures to immigrate and become naturalized citizens,” she said. She is the first in her family to graduate from college and go to law school.

Lee believes the Republican Party contributed in a large way to allowing her family “to live out the American Dream,” and she wanted to give back by going into politics, particularly as a Republican. “I don’t fit the profile of ‘rich, white and old,’” she says, but “I wanted to contribute to a better narrative of what the party believes.”