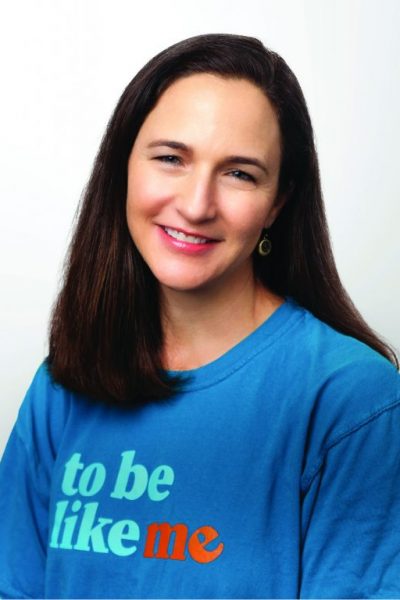 “I learned a lot at W&L about being friendly and open to meeting new people — just saying hello and being kind. Really, I would not be here if I didn’t listen and follow. One person has led me to the next.”

It was children’s questions and assumptions that made Hollis Owens ’97 realize Dallas needed a new nonprofit. “Do blind people just see black?” they asked when she facilitated disability workshops in schools. “This must be awful!” they said as they simulated disabilities. She realized that people living with disabilities needed to be the ones leading.

Owens didn’t fit that profile herself. But after 19 years as a physical therapist, she knew who did: people like her patients, who had disabilities and often lacked a platform to speak about them. A closet entrepreneur, she began asking questions and tapping her network.

“I never said no to a meeting,” she said. “I learned something from everyone.” Today, her nonprofit To Be Like Me has 20 leaders or volunteers with disabilities. In less than six months of programming, they have run more than 900 kids through interactive scenarios to enhance disability awareness.

Helping People
At W&L, Owens intended to enter medical school. But as she prepared to take the MCATs, her advisor, psychology professor Jeanine Stewart, opened her eyes to possibilities beyond an M.D. “I’ll never forget it,” Owens said. “I said, ‘I just really want to help people, and I think medical school is the answer.’ And she said, ‘I see you in health care for sure, I’m just wondering if you’ve looked at other opportunities.’”

Owens had loved coursework in kinesiology and neuroscience, and after graduation she went into physical therapy, which brought her to Dallas for her master’s degree. There she married Brian Owens ’96 and tapped into a W&L network that would later be essential in getting her nonprofit off the ground.

For the first two decades of her career, Owens put family ahead of her desire to create. “I’ve come up with probably a dozen physical therapy products,” she said, “and then life gets in the way.” Her four daughters would need her time, “and then I’d see my product on the market and think, ‘Oh, well, I guess I’m not doing that anymore.’”

But the desire to help never left her, and as she explored how to create opportunities for people with disabilities, doors opened. A friend from church found a new space looking for disability programming; Owens had worked with its director previously. Two of her sorority sisters from Kappa Kappa Gamma, Margaret Hawn Kelley ’96 and Carol Pierce Goglia ’95, helped with getting the word out and fundraising. Owens’ husband handled graphic design. Former patients and friends including Taylor Shultz ’98 volunteered time and experience. Shultz sustained a traumatic brain injury six years ago and has found purpose in educating participants about the challenges he faces.

Owens put together a team, tested programming and trained leaders. Now, To Be Like Me is on target to teach empathy and understanding to thousands of students each year.

Conversations
“It’s part of who I am,” participants repeated when Owens asked about their disabilities. During focus groups, she tested language, messaging and workshop content. Responses centered on intent and equal opportunity, as well as problems caused by making assumptions.

If someone wants to help a person with disabilities, Owens said, “The best thing to do is to have a conversation with that person, whether it’s an employer talking to their employee or a teacher having a meeting with parents and a kid, just opening up dialogue and saying, ‘What can we do to help you feel comfortable?’”

Simple adaptive equipment like noise-canceling headphones or alternative seating can help. “We have so much more in common than we think,” Owens said. “I have some difficulty processing lots of sensory input, and I can’t have too many things going on around me or I can’t concentrate; I love wearing noise-canceling headphones. We all have our strengths and our areas where we need a little more help.” The key, she said, is finding the right tools to help people learn and live in their own unique way.

Owens’ advice for other alumni looking to give back is simple: Remember who you are, and follow where you’re being led. “I learned a lot at W&L about being friendly and open to meeting new people — just saying hello and being kind. Really, I would not be here if I didn’t listen and follow. One person has led me to the next.”

W&L Connections
“My dad (Hollis Drake Leddy ’71) just happened to have an alumni meeting at Washington and Lee during our college tour. In the car afterward, I said, ‘That’s where I want to go, and I want to apply early.’ Thankfully, I was accepted, and I loved every minute of my time there.”

The Speaking Tradition
“Sometimes kids don’t know what to say to somebody who looks or acts a little bit different. A lot of our leaders tell the participants, ‘Instead of staring, just say hello.’ I think that’s an important point, and I definitely learned that at W&L.”

Let It Go
“I’m going to totally out myself as a nerd, but I did my thesis on the effects of aluminum, cadmium and zinc on the olfactory system in goldfish. In the Psychology Department, we had a cryotherapy lab. That lab was my favorite calming and peaceful place on campus.”

Related //Neuroscience, Psychology, The College
Tagged //Class of 1997, from the magazine, Hollis Owens '97, neuroscience, nonprofit, psychology, To Be Like Me
Loading Comments...