Justice Ginsburg to Speak at VMI, W&L Feb. 1 The public event will be at VMI's Cameron Hall. It is free, with seating available on a first come, first served basis. The events at W&L are closed to the public and to the media. 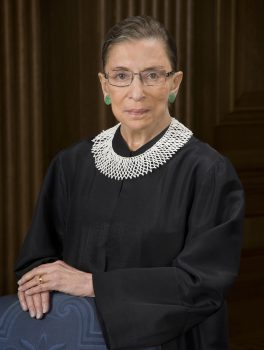 U.S. Supreme Court Justice Ruth Bader Ginsburg will participate in a public on-stage interview as part of a visit to Washington and Lee University School of Law and Virginia Military Institute on Feb. 1.

The public event will be at VMI’s Cameron Hall.   It is free, with seating available on a first come, first served basis.  No tickets are required.  The event begins at 11:15 a.m., and doors to the building are expected to open at about 10 a.m. Overflow viewing of the event will be available in Gillis Theatre in Marshall Hall.

Large groups are asked to call 540-464-7361 to provide information about the number of people and vehicles they will bring. Attendees are asked to minimize the items they bring to facilitate security screening. Backpacks and other large bags are prohibited. Cameras and cellphones are allowed.

Additional information about the public event, the only event Ginsburg will hold at VMI, will be provided on the VMI website (www.vmi.edu) as it becomes available.

The events at W&L are closed to the public and to the media.

When she was appointed by President Bill Clinton in 1993, Ginsburg became only the second female justice, after Sandra Day O’Connor, in the history of the Supreme Court. Along with Sonia Sotomayor and Elena Kagan, she is now one of three women serving on the nation’s highest court.

Throughout the course of her professional life, the now 83-year-old Ginsburg has been an advocate for women’s rights and gender equality. In the 1970s, she co-founded the women’s rights project at the American Civil Liberties Union and later became the organization’s general counsel. Also during that decade, she became the first woman to earn tenure as a professor at her alma mater, Columbia Law School. At the time she entered academia, at Rutgers University in 1963, there were fewer than 20 female law professors in the United States.

In 1980 President Jimmy Carter appointed Ginsburg to the U.S. Court of Appeals for the District of Columbia Circuit, a position she held until her appointment to the Supreme Court 13 years later.

In 1999, she won the American Bar Association’s Thurgood Marshall Award for her contributions to gender equality and civil rights.

NOTE TO EDITORS: News media organizations interested in covering the VMI event are asked to contact Maj. John Robertson, (robertsonjr@vmi.edu, 540-464-7366). Media inquiries for the W&L School of Law should be directed to Peter Jetton, senior director of law communications (pjetton@wlu.edu, 540-461-1326).