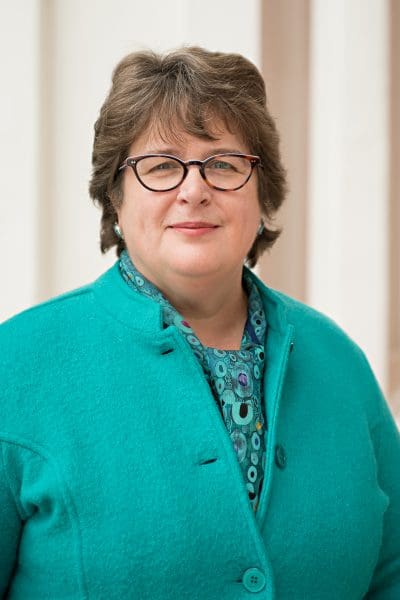 Suzanne Keen, dean of the College and Thomas H. Broadus Professor of English at Washington and Lee University, has been named vice president for academic affairs and dean of faculty at Hamilton College, Clinton, New York. She will begin her new role on July 1, 2018.

W&L Provost Marc Conner said Keen will remain in her current position through the current academic year. The process for hiring her replacement will be announced this winter.

“It is difficult to adequately express how important Suzanne Keen has been to W&L since her arrival in 1995,” said Conner. “She has been one of the great teachers of the university, a gifted and passionate educator who has taught thousands of students the joys and challenges of great literature. In her roles as chair of the English Department and on many important university-wide committees, she has been a leader and an eloquent voice of reason and commitment in everything she has done.”

Keen, who was acting chair of the Department of English from 2003 to 2004, and chair from 2010 to 2012, teaches courses in British fiction and postcolonial literature and a number of first-year and upper-level seminars. She has published widely on the topic of narrative empathy, and authored several books, including a textbook on narrative form and a volume of poetry. In 2008 she received an Outstanding Faculty Award from the State Council of Higher Education of Virginia (SCHEV), one of 12 awarded state-wide.

She served as interim dean of the College in 2012-2013 before assuming the position permanently in 2013. In that role, she hired dozens of faculty, with an emphasis on improving faculty diversity and cultivating a younger generation of campus leaders; created Teacher-Scholar Development Cohorts; added Arabic language instruction and Experiential, Global Learning and Perspectives course designations; carried out strategic planning for the College; advocated for the future of STEM pedagogy; and launched W&L’s Digital Humanities Initiative.

In her new role at Hamilton, Keen will serve as the chief academic officer and as the primary voice of the faculty on the president’s senior leadership team.

“While I have had the privilege of working with Suzanne for only one year, it is clear to me that she has had an enormous impact on W&L during her tenure at the university,” said W&L President William C. Dudley. “Suzanne’s passion for her students, the faculty, and teaching are evident in everything she does. She will be a great asset to both the faculty and the senior leadership at Hamilton.”

“I have been forged as a faculty member and senior administrator at W&L,” said Keen. “I am proud to have been part of a faculty so accomplished and so dedicated to our teaching mission. I have witnessed wonderful development in both the quality and diversity of our students since 1995, and the hardest part of this departure involves leaving my W&L teaching behind. My sweetest memories take place in the Payne Hall seminar room.”

More information about Keen’s appointment is available on the Hamilton College website.